PEVELY, MO (April 3, 2021) – The World of Outlaws NOS Energy Drink Sprint Cars on the high-banked bullring of Federated Auto Parts Raceway at I-55 is like flying jet fighters in a gymnasium.

The high-octane thrill show lived up that moniker on Friday night as The Greatest Show on Dirt delivered intense battles, shocking drama, jaw-dropping slidejobs, and so much more at the Pevely, MO 1/3-mile. 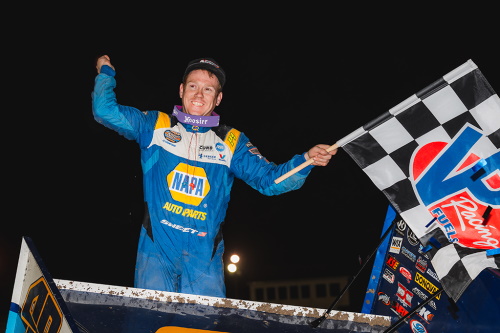 In the end, Brad Sweet romped from ninth and secured the checkered flag for his third consecutive victory, fourth of the season, and 62nd of his career. It was the latest act over a dominating stretch as the two-time and defending Series champion continues to extend his points lead aboard the Kasey Kahne Racing w/ Mike Curb, NAPA Auto Parts #49.

“We don’t want to give away our secrets,” Sweet joked when asked what’s clicking. “We’ve got a lot of experience working together with Eric [Prutzman], Andrew [Bowman] and Joe [Mooney]. There’s a lot to be said about us all sticking together. We’ve got a great car owner in Kasey Kahne and we’re blessed to work with NAPA Auto Parts as our sponsor. We’re working hard to capitalize on the situation we’re in.” 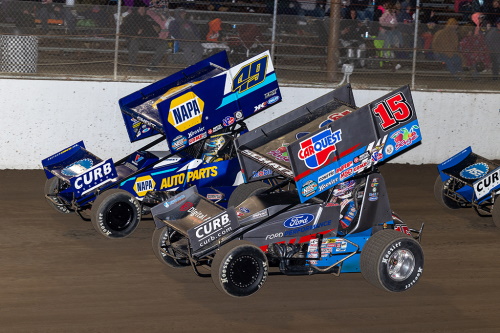 Sweet’s triumphant streak vs. Schatz’s heartbreaking stretch is polarizing to all. (Trent Gower)

It was all about Sweet at the finish, but from the start of the night all eyes were on his Kasey Kahne Racing teammate, James McFadden.

Bolting from the outside pole at the start of the 40-lapper, Schatz went to the race lead for the first time since February. The 10-time Series champion commanded the opening 17 laps aboard the Tony Stewart/Curb-Agajanian Racing, Carquest #15 before a mechanical issue stripped him of the top spot. Amid Schatz’s heartbreaking moment rose Kraig Kinser’s awe-inspiring rise.

The Bloomington, IN native officially led one lap aboard the #11K, but then attention turned to ninth-starting Sweet on lap 19. That wasn’t without a monumental effort from Sheldon Haudenschild, who launched a behemoth slidejob to clear three cars into turn one at the midway restart.

A pair of stoppages for top-five running James McFadden and Jacob Allen slowed the pace before the final restart with with 11 to go. From there, Sweet ran off into the distance to a 1.012-second margin of victory at the end of a grueling 40-lap war.

The Grass Valley, CA native has tied career-highs with a run of three consecutive victories and a stretch of seven straight podium finishes. He could establish his own personal record in tomorrow’s show.

“Winning from ninth against this level of competition says something special about this team,” Sweet said. “We don’t like to get too excited, but it’s nice to get a win. I thought we were off at the end, so we still need to get better.” 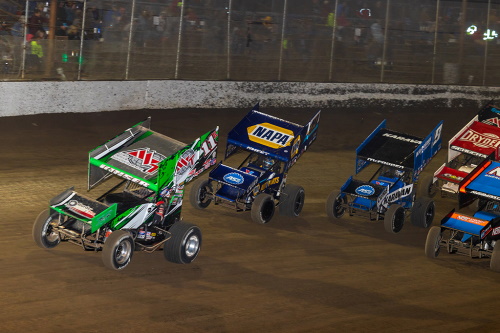 Coming home in second-place was Kraig Kinser with his first podium appearance in almost nine months. The rejuvenated star is off to a stout start with four top tens in the opening ten races, and now he’s leading laps and contending for wins.

“I felt pretty good,” Kinser noted. “I made some “You’re always feeling good when you’re running good. We’ll take it, but we want those wins. Brad is a champion for a reason, though, you can’t give him any openings and tonight I did.”

Rounding out Friday’s podium and collecting the KSE Hard Charger Award was Logan Schuchart with an impressive 16th-to-3rd charge. Passing 13 cars in the Drydene Performance Products #1S, the Hanover, PA native extended his record-start to a season with his now tenth top-ten result in ten races.

“The restarts were good to us, that’s for sure,” Schuchart offered. “It’s just cool to be at I-55, though. This is one of the best tracks we go to all year. We’re lucky to get 3-4 dates here and not just one night. I just need to put ourselves in a better position to compete for a win tomorrow.”

Chasing those three to the line was Sheldon Haudenschild in fourth, Carson Macedo in fifth, Rico Abreu in sixth, Aaron Reutzel in seventh, David Gravel in eighth, Brian Brown in ninth and Sam Hafertepe Jr. in tenth.

UP NEXT – The World of Outlaws NOS Energy Drink Sprint Car Series caps off an exciting doubleheader at Federated Auto Parts Raceway at I-55 on Saturday, April 3 with another $10,000-to-win, 40-lap showdown. 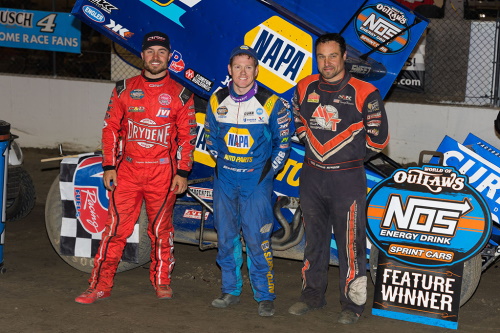