BRISTOL, TN (April 10, 2021) – When it comes to the World of Outlaws Morton Buildings Late Models, there aren’t many accomplishments left for Josh Richards. But during Friday’s portion of the Bristol Bash, he added another notch to his belt.

The four-time champion won the first World of Outlaws Morton Buildings Late Model race at Bristol Motor Speedway, and the $10,000 check to go with it. 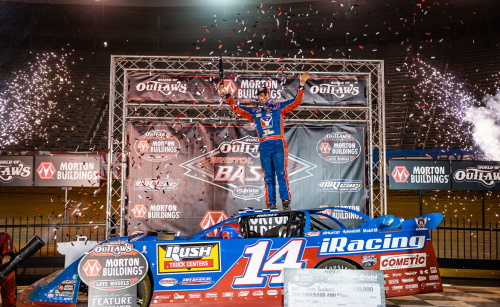 The win may not have happened without a little luck, even though Richards drew the outside pole for the Feature.

Tennessee driver Jimmy Owens looked to be on a path toward home state glory, before heartbreak hit the Ramirez Motorsports machine. His left rear wheel came off the car, handing the lead to Richards.

The all-time winningest driver led the rest of the way, for his 78th Series victory.

Richards said he’s not sure if the Clint Bowyer Racing team had enough for Owens. He said the race into Turn 1 was very important on the initial green flag.

“On that first corner running wide-open with hard tires [the pass] wasn’t going to happen,” Richards said. “I hate it for those guys tearing stuff up, but most of all I’m glad [Owens] is ok.”

Out of all of his wins, the Shinnston, WV native puts Bristol toward the top of his list.

“The first one is going to be the best for sure but this one’s up there, it’s pretty cool to win the first one here,” Richards said.

Finishing second to Richards was Chris Madden, who was reeling in the 14 toward the end of the race. The Gray Court, SC driver said the last caution didn’t help his chances of finding Victory Lane. 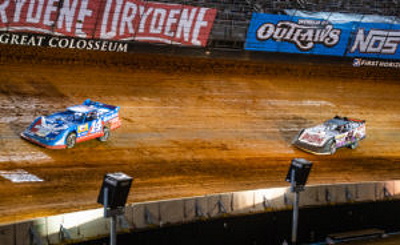 “I definitely think I had him before that caution, actually we were door to door,” Madden said. “I definitely had a good car on long runs for sure and I think that’ll be a key factor [Saturday] night.”

“I think we have a really good race car, it’s just one of those deals that you really need to start up front here because it makes for a lot easier night,” Sheppard said.

“I think for the big race on [Saturday] as long as it stays green for a little while I think we’ll have something.”

Sheppard leaves night one of the Bristol Bash as the new Series point leader. Kyle Strickler did not finish the event, after running over Owens’s left rear wheel and flipping over in Turn 4. 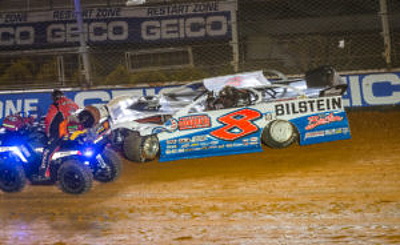 The distance between Sheppard and Stricker is 18 points going into Saturday’s portion of the Bristol Bash. Chris Madden moved up the most spots in the standings. He sits third just 74 points behind Sheppard.

The World of Outlaws Morton Buildings Late Models return to Bristol Motor Speedway Saturday April 10, for night two of the Bristol Bash. The Most Powerful Late Models on The Planet will run another 40-lap Feature, this time paying $25,000-to-win. 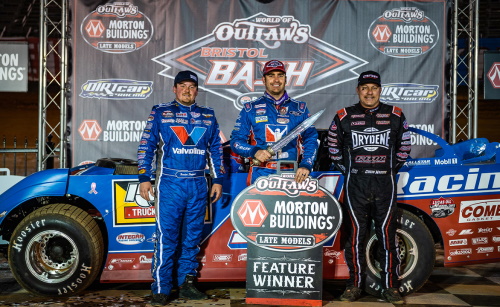