Elizabeth Finamore scored the Coolshirt Systems Pro Jr. Dragster victory, running a 7.933 on a 7.90 dial-in in the final round, while Ethan Steding broke out with a 7.888 on his 7.90 dial-in. Alyssa Rabon, the defending world champion in Classic Graphix Top Jr. Dragster, started her title defense season with a win when she defeated Hunter Cunningham in a double-breakout final round. Rabon ran a 9.105 on a 9.11 dial-in next to Cunningham’s 9.11 on a 9.13 dial. 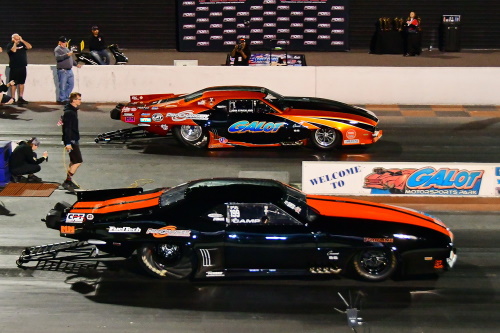 Camp (near) over Rivenbark

PRO BOOST
Longtime Pro Nitrous racer Johnny Camp earned his first-ever win in the series last year after making the move to Pro Boost with a ProCharger-boosted ’69 Camaro under the Proline Racing umbrella. This weekend, Camp stepped up when it mattered most, using a holeshot advantage and a 3.668-second pass at 203.61 mph to hold off Kevin Rivenbark’s 3.644 at 205.13 in the East Coast Nationals final round.

“It feels great to start the season with a win,” Camp said, thanking NGK Spark Plugs, Proline Racing Engines, Chris Tatman Electric, and Camp Bros. Concrete Pumping. “We have a new engine package, a little bit different cylinder head. I can’t say enough about Proline. Awesome crew. It’s not me, it’s all of us. It’s a team effort. In my opinion, these are the best drivers here in PDRA. Even to qualify and go rounds means you’re doing something.”

Camp’s Brandon Stroud-tuned “Hells Bells” Camaro qualified No. 3 before running a 3.689 at 204.26 to defeat Don Tolley in the first round. The Canonsburg, Pennsylvania-based concrete contractor picked up his first holeshot win of the day in the second round, leading Daniel Pharris and his 3.652 to the eighth-mile finish line with a 3.659 at 205.16. Camp earned his spot in the final by eliminating fellow Proline customer Randy Weatherford in a 3.652-to-3.667 semifinal match.

Rivenbark, driving the ProCharger-boosted GALOT Motorsports ’69 Camaro previously driven by his teammate and reigning world champion John Strickland, went 3.70 to beat Jason Harris and his 3.721 in the first round. He dipped into the 3.60s with a 3.678 in a second-round win over No. 1 qualifier Todd Tutterow, who went red. The two-time world champion left first and finished first in his semifinal race with Jason Lee, running a 3.662 to Lee’s 3.677. 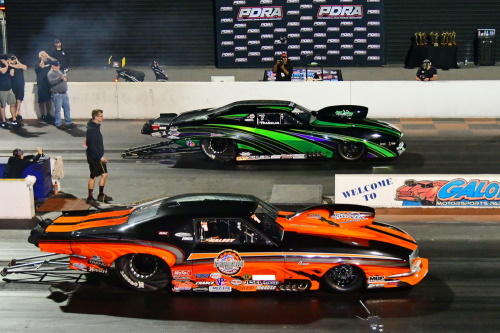 Halsey (near) over Franklin

PRO NITROUS
Two-time Pro Nitrous world champions Jim Halsey and Tommy Franklin added another final-round match to their growing head-to-head record as the two continue to lead the class. Halsey added the win to his column, ripping off a 3.649 at 206.26 in his Brandon Switzer-tuned ’68 Camaro to eliminate Franklin’s 3.673 at 204.17.

“Tommy and I were talking about it in the staging lanes – we can’t get away from each other,” Halsey said. “He’s top of the class. If you’re going to be the man, he’s the guy you’ve gotta beat.”

“I’m pretty impressed myself, to be honest,” Halsey said. “The way the car ran today, it was just a pretty smooth day for us.”

Franklin admittedly struggled during prerace testing and early qualifying, but his Musi-powered “Jungle Rat” ’69 Camaro was back to consistently quick performances once eliminations started. He steadily improved, going from a 3.736 over Dave Roemer’s 3.799 and a 3.692 over Fredy Scriba to a 3.681 to defeat Ron Muenks in the semifinals. 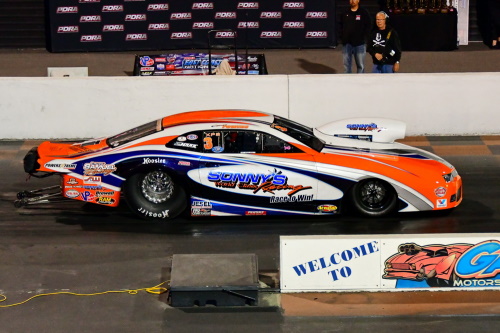 EXTREME PRO STOCK
Extreme Pro Stock racer Chris Powers went into the East Coast Nationals with an extra motivating factor inspiring him to chase victory at the season opener. He wanted to win the event in memory of legendary engine builder Sonny Leonard, who passed away in January.

When engine damage prevented opponent Steven Boone from making the call for the final round, Powers was able to deliver a win for Leonard. He chose to take the tree and idle down the track in his Sonny’s-powered Sonny’s Racing Engines ’14 Camaro while announcer Derrick Beach described Leonard’s accomplishments and impact on the sport.

“[The win] meant everything to us,” Powers said. “We’ve worked our butts off. That’s all we wanted to do is get to the winner’s circle and put something on for Sonny for all his dedication and hard work for this class and all of motorsports that he’s done. I’m just glad that we were fortunate enough and had the horsepower under the hood to get it done. I know he rode with us. I’m just glad we were the ones to get it done for him. His daughter [Kelly] and folks from Sonny’s are here. It’s awesome for them to support us like they do and give us the best they’ve got.”

Boone, the 2018 world champion, nearly matched Powers’ performance in the opening round with his 4.107 to eliminate Elijah Morton. He ran a 4.115 in his Allen-powered Boone Motorsports ’07 Cobalt in the semifinals, winning over a red-lighting John Montecalvo. 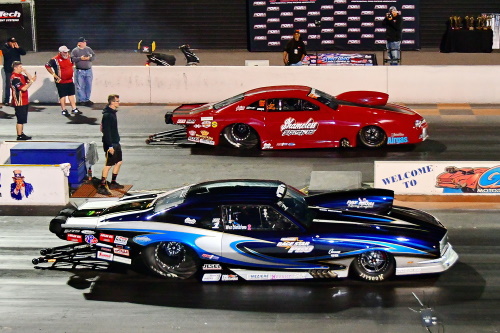 PRO OUTLAW 632
In one of the best weekends ever for the PDRA’s Pro Outlaw 632 class, E.T. record holder Jimmy Pelcarsky pulled out a major victory over new $hameless Racing teammate Wes Distefano in the final round, which featured the quickest side-by-side pass in class history. Distefano grabbed a slight starting line advantage and clicked off a career-best 4.151 at 170.84, but it wasn’t enough to hold off Pelcarsky’s 4.136 at 170.15 in his small-block ’15 Camaro.

“I’d like to thank Dave Swallow [of $hameless Racing], my dad Tom Pelcarsky, my uncle Wayne Pelcarsky, and my son Thomas,” Pelcarsky said. “We did it. First race of the year, we’re coming out swinging and we’re going for the championship. We’re back, baby.”

It was the second Pro Outlaw 632 victory for Pelcarsky, who qualified No. 1 with a 4.134. He opened eliminations with a 4.19 round win over rookie Lexi Tanner, then dodged a bullet in the second round when Jordan Ensslin red-lit away a 4.456 to Pelcarsky’s 4.746. The Ohio driver stepped back up for the semifinals, handily defeating Chris Holdorf and his 4.242 with a 4.144 at 170.28. 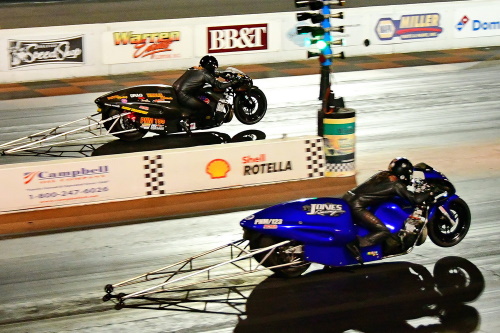 PRO NITROUS MOTORCYCLE
In a quest for improved performance, three-time and defending Pro Nitrous Motorcycle world champion Travis Davis upgraded the engine management technology in his Timblin Chassis ’18 Hayabusa over the winter. The work resulted in a career-best performance and a win for Davis, as he used a 3.995 at 175.30 to defeat championship runner-up Chris Garner-Jones and his 4.078 at 173.90 in the final round.

“We just kept picking at it round by round,” said Davis, crediting Dan Wagner at DTM Performance, Steve Nichols with MaxxECU, and Dalton Perry at Perry’s Performance for contributing to his performance, along with longtime supporters like Timblin Chassis and Monster Cylinder Heads. “We went the 3.95 [in the semifinals] and it showed that we probably could go faster, so we turned it up a little bit more and it got the tire out there. We were trying to go for the record. Being that you’re that close to it, you have to just try for it. We’ll try it again at the next one. We’re pleased with everything.” 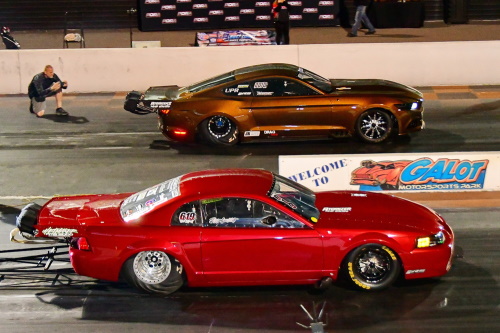 Lambert (near) over Essick

PRO STREET
Longtime Outlaw 10.5 competitors Jesse Lambert and Tim Essick were the last two drivers standing in Pro Street, a small-tire class PDRA unveiled in 2020 and revamped over the offseason. Lambert qualified No. 1 in his twin-turbo ’04 Mustang and continued to lead the class in eliminations. He used a 4.019 at 199.73 to drive around Essick, who left the starting line first but trailed by just .007 at the finish line with a 4.054 at 183.29.

“It’s really nice to come out here to the first race with this new class and win,” said Lambert, who mentioned supporters Joe Newsham from J&E Automotive, Adam and Andy Lambert at PRS Shocks, Cutaway Creations, Billet Atomizer, AMS2000, and VP Racing Fuels. “We’re really excited about this class. I really think it’s going to be something big – a lot of opportunity here. I’m excited to have my family here with me. We really worked hard this weekend. It was worth it.”

Lambert started race day with a competition single, then fired off a 4.025 at 200.02 on a semifinal single, where he was set to face Chris Cadotto.

Essick qualified No. 3 in his ProCharged “Brown Sugar” ’18 Mustang and pulled out round wins over Anthony Matney and Ty Kasper before facing Lambert in the final round. 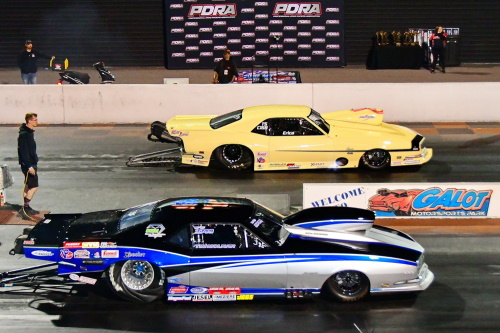 Molnar (near) over Coleman

TOP SPORTSMAN
In Elite Top Sportsman, Tim Molnar earned the first win of the season in his nitrous-assisted ’68 Camaro. He went red by .003 in the final round, but Erica Coleman went red just a few thousandths sooner in her Fulton-powered ’68 Camaro. Molnar went on to run a 3.871 on a 3.85 dial-in, while Coleman ran 3.975 on a 3.96 dial-in.

It was a battle of class veterans in the Top Sportsman 32 final round, where Ronnie Proctor and Scott Wasko faced off. Wasko left .011 too soon in his ’11 GXP, allowing Proctor to race on for the win with a 4.448 on his 4.33 dial-in in his ’09 Mustang. 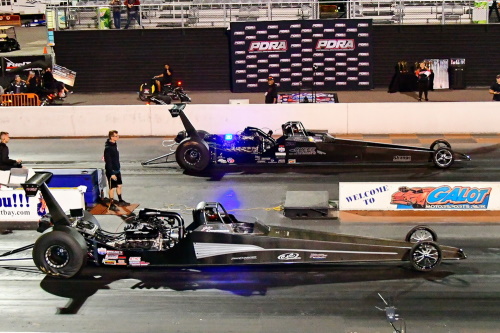 White (near) over Farmer

TOP DRAGSTER
A pair of ProCharger-boosted entries squared off in the Elite Top Dragster final round, as 2019 world champion Kellan Farmer took on No. 2 qualifier Michael White. A quicker reaction time helped White seal the deal, securing the win with a 3.811 on a 3.79 dial-in in his ’15 Maddox dragster. Farmer, debuting a brand-new ’21 Race Tech dragster with a new ProCharger combination, followed with a 3.915 on a 3.90 dial.

Racing out of the No. 35 spot in the Top Dragster 48 field, TG Paschal managed to make it to the final round to take on No. 4 qualifer Matthew Buck. Buck had the better reaction time in his West Palm Beach, Florida-based ’00 Worthy dragster, but he slowed to a 4.48 on a 4.10 dial-in while Paschal ran a 4.552 on a 4.52 dial in his ’12 Race Tech dragster to get the win.