The Dresden, OH driver passed Ricky Weiss in traffic with 10 laps to go to win his second World of Outlaws Morton Buildings Late Models Feature of the season.

It’s a special win, Moran said, especially with the $25,000 check he walked away with. 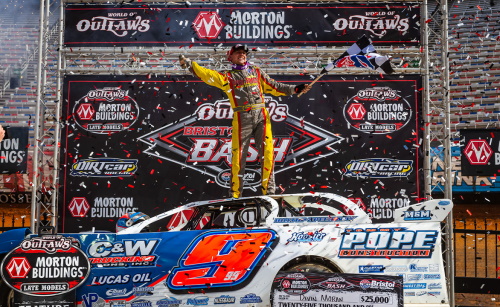 “We’re definitely going to take this in for what it is,” Moran said. “To come back and be able to pass Ricky [Weiss] for the win was pretty cool.”

The win is Moran’s sixth World of Outlaws win of his career. That now gives him one more than his father Donnie, who’s last win was in 2008.

Despite starting second, the win wasn’t easy for “The Mailman.” He dropped back a few positions on an early re-start, and needed to crawl his way back.

Figuring out the restarts was one of the hardest parts of the 40-lap race, Moran stated.

“On the restart when I was in fourth [Lap 11], I saw Chris [Madden] really charged hard into one to get by Ricky [Weiss], and it let me get back underneath Chris,” he said.

Moran bided his time until Weiss caught traffic. He made his move with 10 laps to go, darting to the top of the track and clearing Weiss on the front stretch.

He knew that move was his one shot to go after the lead once Weiss caught slower cars.

“[Weiss] caught lap traffic too quick for himself,” Moran said. “I was biding my time and I feel like he had to use up his tires more than I did. Once I got to him, I could take advantage and move out of the rubber.”

Ricky Weiss finished second after leading the first 30 laps of the race. He wasn’t surprised that Moran was able to use the outside line to get by. 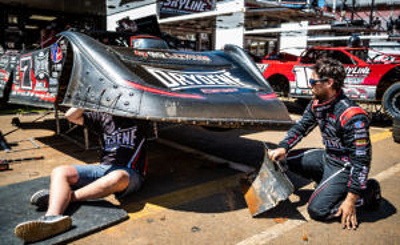 The 7 team makes changes before the Feature/Jacy Norgaard photo

“Anytime you can watch the leader and see what they’re doing it’s easier to judge off the car in front of you,” Weiss said. “I couldn’t seem to get by Parker [Martin] at the end. He slipped up a little bit which made me check-up, and it was all over from there.”

Weiss’s second place finish didn’t come without hard work from his team. The crew had to change the rear-end on the car in an hour window between the Heat Race and Feature. Despite having to make that change, Weiss was still confident in his car.

“I was more than confident, it wasn’t like we were changing bolts while I was getting in,” Weiss said. “I had more than enough confidence to sit on the pole.” 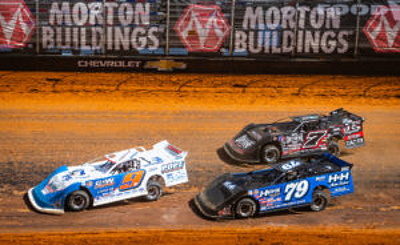 Ross Bailes had a strong third place finish in the 40-lap Feature. He said a better starting spot may have helped in the end.

“I think I needed to start on the front row, we drew fourth and it put us back as far as it possibly could,” Bailes said. “Devin did a really good job getting through lap traffic and it was just his day.”

Ricky Thornton Jr. charged from 21st to finish fourth. He was another driver that used the outside lane to his advantage.

“I watched Jonathan Davenport get to the top in [Turns] three and four and I look up and he was like ten cars ahead of me,” Thornton said. “That’s when I thought maybe it was time to move up.”

Sheppard now leads Strickler by 20 points in the standings.

UP NEXT: The World of Outlaws Morton Buildings Late Models are heading to Richmond Raceway in Richmond, KY Friday April 23. On Saturday April 24, they’ll travel to Brushcreek Motorsports Complex in Peebles, OH.

Visit www.richmond-raceway.net or www.brushcreekmotorsports.com to buy tickets for either event. 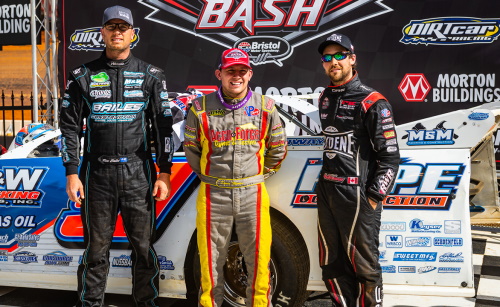