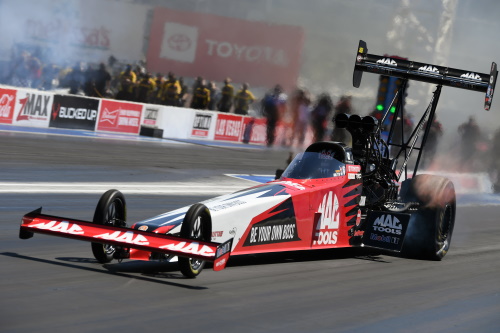 Doug Kalitta and the Mac Tools Top Fuel dragster raced to the final round of the 21st NHRA Las Vegas Four-Wide Nationals grabbing a runner-up finish and jumping up to fourth place in the Camping World Top Fuel point standings. Throughout the weekend Kalitta and the Mac Tools team were at the top of their game. During qualifying they posted some of the quickest times grabbing three qualifying bonus points for running the third quickest run of the second session and the second quickest run during the final qualifying session.

As the No. 3 qualifier Kalitta squared off with teammate Shawn Langdon, Troy Buff and Rob Passey in the first round. The round win was never in jeopardy as he was first off the starting line and first to the finish line with a 3.751 second run.

The next quad featured Kalitta facing Steve Torrence and Leah Pruett along with Langdon. At the finish line it was Kalitta crossing beside Torrence to advance to the final quad. The Mac Tools team kept it consistent and quick with a 3.768 second run.

In the final quad Kalitta, who is celebrating 20 years with primary sponsor Mac Tools, was looking for his first Las Vegas Four-Wide Nationals win and first win of the 2021 season. As the starting line Christmas Tree fired the Mac Tools dragster launched hard and was racing to the finish line when it began mixing up cylinders. Kalitta was able to keep it in the groove but he lost power and speed opening the door for Torrence to drive around him for the win.

“A 3.82 won the race out there today and we were running much better than that,” said Kalitta. “It looked like we were ahead, but we dropped a cylinder and threw the rods out before the finish line. We didn’t quite make it to the finish line. We were really hoping to get the win today. We gave it our best. I’m really proud of my guys and the TRD guys did a great job with lane choice. I don’t know why we dropped the cylinder. We’ve been tearing up some parts and that’s got to end pretty quickly and we’ll just keep at it.”

Kalitta and the Mac Tools team will head to Atlanta No. 4 in the Top Fuel point standings.

Quotable:
Doug Kalitta on Vegas Four-Wide Nationals: “There is a lot going on up on the starting line but you just have to do your regular routine. Our Mac Tools dragster was strong all weekend. I am looking forward to getting back on track in Atlanta in a couple weeks.” 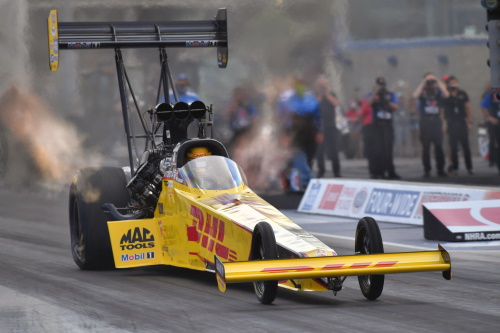 The DHL Kalitta Air Top Fuel dragster was looking to continue their dominant start to the season on the heels of their runner-up finish at the season opening Gatornationals. The 21st NHRA Las Vegas Four-Wide Nationals provided the opportunity for Langdon to briefly jump into the points lead after qualifying. Heading into race day the No. 6 qualifier knew he would face some tough competition but the 2013 NHRA Top Fuel world champions also knew he had a race car that could holds its own against any race car on the property.

Langdon was looking for his first Top Fuel four-wide title to add to his 2019 Funny Car four-wide win at the Carolina Nationals. In the opening quad Langdon was racing with teammate Doug Kalitta along with Troy Buff and Rob Passey. Langdon had the confidence he could be one of the first race cars to the finish line. It was a Kalitta Motorsports sweep as Langdon crossed the finish line just behind Kalitta and moved both Top Fuel dragsters to the second quad.

In the second quad Steve Torrence and Leah Pruett joined Langdon and Kalitta. Conditions were changing slightly and Langdon’s team felt they could be a little more aggressive. Unfortunately, the DHL Kalitta Air dragster had a little too much power and when Langdon hit the throttle his 11,000 horsepower land rocket over-powered the track. Langdon saw Kalitta and Torrence pulling away but he feathered the throttle and regained power hoping one of the other two dragster in front of him might run into issues. He ran out of track just over eight seconds after he left the starting line and had to settle for a third place finish in front of Pruett.

“After the first run, we thought we had a great handle on the car and made a great first run,” said Langdon. “We were dragging it back up there, more in a gas-and-go scenario while addressing there was going to be a little more heat on the track. I wasn’t really expecting that (smoking the tires early), sometimes that just happens. In hindsight, there’s really not anything that we did wrong, for some reason it just decided to do that. Unfortunate, I was right there reaction-time with Doug (Kalitta) and Steve (Torrence) and we felt we could have run a .76 or .77. We had a good shot to advance, but we didn’t. We’ll just get ready for Atlanta.”

Langdon will leave Las Vegas No. 2 in Top Fuel points.

Quotable:
Langdon on getting season started “We had a long off-season and then there was about a month between the Gatornationals and this race. I will be glad to get to Atlanta in two weeks and then get into a groove with more races. This DHL team has a lot of talent and I know we can put up some good performance numbers.” 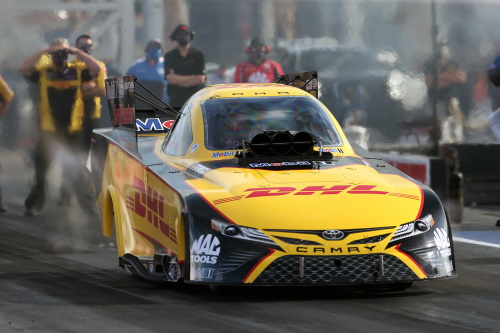 J.R. Todd and the DHL Toyota Camry Funny Car team entered the NHRA Las Vegas Four-Wide Nationals as the points leader and winner of the previous two Vegas four-wide events in 2018 and 2019. The race was not contested last season due to the pandemic. Todd started the season with a win at the historic Gatornationals and was confident his DHL team led by crew chiefs Todd Smith and Jon Oberhofer could grab a third win at the spring event.

During the two days of qualifying Todd got off of a good start with a 3.980 second run on Friday. On Saturday the team worked on a race day tune up with limited success. On both runs his DHL Camry Funny Car hazed the tires at the top end but Todd felt strongly they were getting closer to a manageable tune-up.

He entered race day as the No. 9 qualifier and needing to finish in the top two racing against No. 1 qualifier Robert Hight, No. 8 qualifier Cruz Pedregon and No. 16 qualifier Jonnie Lindberg. The preparation Todd’s team did after the third qualifying session paid off as his DHL Toyota Funny Car roared to the finish line with a winning time of 3.955 seconds outpacing second place finisher Hight’s 3.980 second pass. The round win gave the team a boost heading into the next round.

The second round quad was comprised of Todd, Hight, Ron Capps and Bob Tasca III. Todd’s DHL Funny Car slowed slightly from his stellar first round pass and crossed the finish line in 3.983 seconds. His streak of seven consecutive round wins at the NHRA Las Vegas Four-Wide Nationals came to an end but Todd knew there were more good runs on the horizon.

“We had a great streak going at the four-wide nationals winning the last races here in Vegas,” said Todd. “We were right there in that second round. It is early in the season and I have a lot of confidence in this DHL Toyota Camry team. The first round win was big and our second round quad was stacked for sure. We got that win at the Gatornationals and for sure we would have liked to have gotten a third Vegas Four-Wide Nationals win today. We are right up at the top of the points. I know we will be ready for Atlanta and I will be looking to get four win lights.”

Quotable:
J.R. Todd on racing Vegas Four-Wide Nationals: “We have had a lot of good luck at the Vegas four-wide races. I think my whole team has a really good handle on this race track. I like racing here.”