BRISTOL, TN (April 21, 2021) – The history-making Bristol Throwdown featuring the Super DIRTcar Series and the World of Outlaws NOS Energy Drink Sprint Cars is ready to launch this week. The Big Blocks are set to shake down The Last Colosseum on Thursday night before 40-lap, $10,000-to-win NAPA Super DIRT Week qualifiers on Friday and Saturday.

“It’s Bristol, baby” is the tagline everyone knows. But what makes it so special? Bristol Motor Speedway, the pride of The Volunteer State, is a NASCAR legacy track with a reputation for massive speed in close spaces and memorable, career-making finishes. 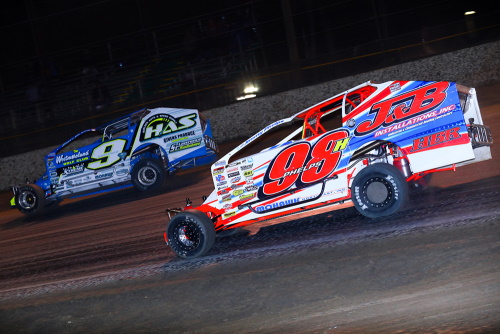 The Last Colosseum it may be, but as one of the United States’ largest sports facilities, Bristol has stood the test of time. Size and capacity do not alone make the track great. Names like Earnhardt, Gordon, Labonte, and Waltrip have all left their marks on the colossal half-mile in their own ways — and sometimes by any means necessary.

Hair-raising speed is one of the time-honored elements of racing that appeals all to drivers and fans of racing. Race fans are encouraged to bring earplugs because the roar of 28 Super DIRTcar Series Big Block Modifieds coming to life has never been heard in the hallowed halls of Bristol. The sound of the engines at the end of the straightaways echoing off The Last Colosseum may bring race fans back to the epic sound of the engines at the New York State Fairgrounds.

Drivers are gearing up for their time in the Bristol spotlight. Nearly 30 of the confirmed drivers were on hand at the April 10 Series points-opener at Can-Am Speedway. Stewart Friesen took the win with Tim Fuller in tow. Lightning Larry Wight in the Gypsum Express #99L was third, which made him the highest-finishing championship contender.

Seven-time Series champion Matt Sheppard had a solid run in the first Series points at Can-Am and finished seventh. The Bristol doubleheader is a huge opportunity for Super Matt to make up some vital points in the early season. The #9S is ready for the challenge.

“Any time you can go to a place like Bristol and race it’s exciting,” Sheppard said. “I personally have never been there. I’ve heard so many stories about the place. To think that we’ll be down there actually racing on it is pretty awesome. It’s definitely an intimidating-looking place. I don’t know how our modifieds will take to it, but I am looking forward to the challenge.”

The only driver Sheppard is chasing on the all-time championship win list is Brett The Jet Hearn, the legend from Sussex, NJ. While his NASCAR career never took him to Bristol, Hearn has been a fan of the race track for decades.

“I’ve never seen the place in person, but I’ve watched it plenty of times on TV,” Hearn said. “I know there are a lot of people excited about it. It’s great for dirt modified racing.”

Younger drivers like Jack Lehner are looking forward to testing their mettle at Bristol like the veterans and legends of the past tested theirs at the New York State Fairgrounds one-mile race track. The Saratoga Springs, NY driver is a burgeoning fabricator and is excited about the potential for improvements on the high-speed track.

“Air is going to be a big thing,” said Lehner. “It’s going to make a difference. That’s good for me building bodies because maybe I can do a few things that I think will be better for a track like that. I think we will see some stuff that you might have seen at Syracuse. We’ll be doing things a little differently because it’s a different animal.”

An eastern New York neighbor to Lehner, Demetrios Drellos, weighed in on what it means to race Bristol. The driver from Queensbury, NY operates the #111 machine and has one Series win to his credit.

“I feel very fortunate that I get to go to Bristol Motor Speedway,” Drellos said. “It feels great to be able to go to a NASCAR facility with my own race car. That right there is pretty cool. From what I have seen in the videos is that it’s going to be awesome. There are no cons. It’s only good for us.”

Forty-two Super DIRTcar Series Big Block Modifieds are set to join the World of Outlaws NOS Energy Drink Sprint Car Series at Bristol for three days of speed. Buy tickets here, and if you can’t make it to the track pick up your FAST PASS at DIRTVision.com.

Plus, an additional sponsor bonus has been added to the event, specific to the Super DIRTcar Series. SRI Performance is awarding $500 to the driver that redraws position number one for Friday’s and Saturday’s Features, adding more incentive to race into a redraw position.

Stay up to date with the Super DIRTcar Series at SuperDIRTcarSeries.com with features, highlight videos, race reports, results, and more. For even more Big Block coverage, follow us on Facebook, Twitter, and Instagram where for links to our stories, great photos, and behind-the-scenes videos.

Original article can be found on the SuperDIRTcar site