“Atlanta Dragway has a lot of history for me. We’ve been racing there for a long time. It’s going to be sad to see it go but I have a lot of good memories there,” Force said. “Ashley got her first win there; she beat me in the finals. Courtney has won there too, and Brittany is knocking on the door for a win. I’m looking forward to racing there one more time and then say goodbye to a piece of history.”

In 37 years of competing in the Southern Nationals, Force has earned seven event wins in 14 final round appearances with eight No. 1 qualifying positions. For nine straight years, 1992-2000, Force was a finalist and in those final rounds he was victorious in six, his seventh win came in 2005. Atlanta Dragway was also the location of Force’s two closest races; he defeated Whit Bazemore by .001-seconds in 1991 and Robert Hight by .002-seconds in 2005.

Heading into the 39th annual NHRA Southern Nationals, Force is sitting seventh in the points standings after a No. 2 Qualifying effort at the Las Vegas Four Wide Nationals where he was only bettered by teammate and company president, Robert Hight. Opening the season at the Gatornationals, Force was qualified No. 5 qualifying and quarterfinal finish at the hand of Hight. 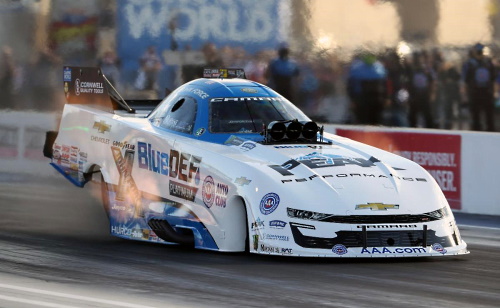 “All of John Force Racing is looking good. Just two races in with some testing and we’re going to continue to be in the hunt this season. This PEAK / BlueDEF Chevy is right there with Robert and Auto Club and Brittany with Monster and Flav-R-Pac are just as fast and quick as ever,” Force said. “We’re going to get to Atlanta and do our job, qualify well and make our fans and sponsors proud. They all stuck by us and I owe them that.”

The final Lucas Oil NHRA Southern Nationals at Atlanta Dragway will take place over two days. Qualifying for the event will start Saturday at 1:15 p.m. ET with a second session at 5:15 p.m. ET. Eliminations will take place Sunday at 11 a.m. ET. Fans can catch the action Sunday on FOX Sports 1 (FS1) with qualifying coverage at 10:30 a.m. ET and eliminations coverage at 11:30 p.m. ET.