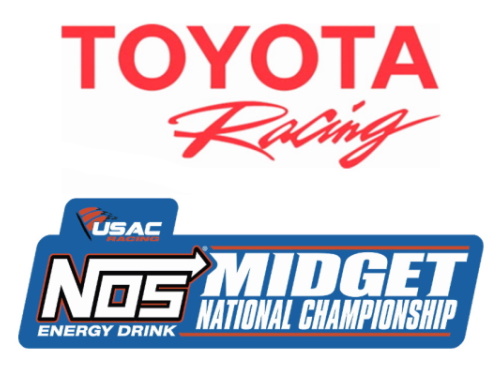 The win was the first of the season for the 2020 USAC champion, with Windom becoming the tenth different Toyota driver to win a national midget feature event this season. Tonight also marked the fifth Toyota triumph in six USAC races in 2021.

Starting from the pole, Windom took the early lead with Pursley jumping up from third to second on the opening lap and immediately beginning a challenge for the lead. By lap three, Pursley would edge Windom as they came back to the flag stand.

The two would trade sliders back and forth through lap six before Windom would officially reclaim the top spot on lap seven. After a yellow flag slowed the field, Windom held the lead on the restart, but Pursley would hit a hole up top and bobble, dropping back to fourth with Tanner Thorson moving up to second and Thomas in third.

Behind them, Kofoid was the driver on the move, climbing up from his eighth starting position into the top four as the race passed the midway point. As they passed the 20-lap mark, Kofoid had moved up to second and began to challenge for the top spot.

Kofoid would make gains, only to see Windom come right back and stretch out the lead, maintaining a second and a half margin through much of the late going as it became a two-car race for the lead with Thorson and Thomas waging a battle for third, but more than four seconds behind the leader.

Windom stretched his lead back to over two seconds in the final laps on the way to the victory, with Kofoid finishing second and Thomas passing Thorson coming out of turn four for third on the final lap. Friday night’s winner, Emerson Axsom, placed fifth.

The USAC NOS Energy Drink National Midget Series is back in action at Sweet Springs Motorsports Complex in Sweet Springs, Missouri, May 14-15.

Chris Windom, CB Industries: “We had a really good car. I wanted to make the top work early, but I saw the guys coming on the bottom so I had to move down. This CB Industries car is just so good. This is a really technical track. I found a safe spot down low, but could run up top when I needed to. I think the track was just a little better down low. Thanks to NOS Energy Drink, Pristine Auctions and Toyota. Glad to end the weekend with a win here.”

Buddy Kofoid, Keith Kunz Motorsports: “I was running the top early and it felt pretty good. Chris was really good on the bottom. I’d catch him, then hit the curb and fall back and then catch him, but fall back again. It’s a very technical track and a tough place to race. I’m glad we got up to second and got some good points. We definitely learned some things tonight. These KKM guys gave me a really good Mobil 1 Toyota.”

Toyota (NYSE:TM) has been a part of the cultural fabric in the U.S. and North America for more than 60 years, and is committed to advancing sustainable, next-generation mobility through our Toyota and Lexus brands plus our 1,800 dealerships.

Toyota has created a tremendous value chain and directly employs more than 47,000 in North America. The company has contributed world-class design, engineering, and assembly of more than 40 million cars and trucks at our 14 manufacturing plants, 15 including our joint venture in Alabama that begins production in 2021.