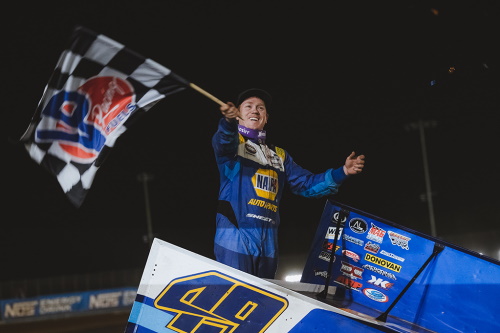 There were odds on Sweet of course, but front row starters Brock Zearfoss and Sheldon Haudenschild shouldered most of the load when the exacta bets came in. When the 30-lap feature went live, all props were on Lil Haud, who amassed a six-second lead in Saturday’s sprint. However, a sudden stoppage allowed The Big Cat to close down the homestretch and sneak away with a stunning victory.

It wasn’t a crown jewel on the level of the Kentucky Derby, but Saturday’s sweep was still meaningful for Sweet, who continues building his championship lead and building momentum with the summer of money approaching.

“Sheldon was way better than us throughout most of that race, but you have to finish these off,” Sweet said. “He left a little opening and got the tires spinning down the front stretch and I saw a gap to shoot. Sometimes it doesn’t matter how you get there, just as long as you get there first.” 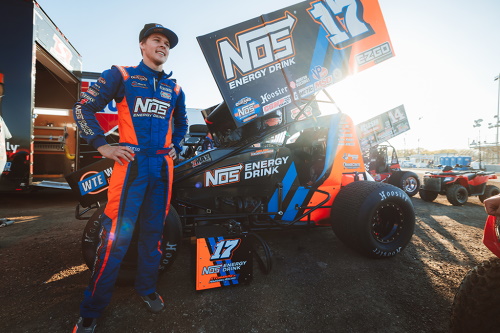 Haudenschild was the story of Saturday after leading 27 laps & finishing third. (Trent Gower)

After losing Thursday’s trip to Jacksonville Speedway in heartbreaking fashion due to a cut tire with eight laps to go, it was given that Sheldon Haudenschild was owed redemption. For 27 laps on Saturday night, he could taste that sweet, sweet redemption; until Sweet himself stole it away.

The Wooster, OH pilot of the NOS Energy Drink, Stenhouse Jr. Marshall Racing #17 was in a league of his own from the start. He beat pole sitter Brock Zearfoss into turn one with a big slider and then threw the deuces out and built a massive six-second lead. He mastered traffic and was poised to celebrate a third win of the year until a spinning Tim Kaeding halted his torrid pace with three to go.

As untimely as it was, it didn’t help anymore that two-time and defending Series champion Brad Sweet had just taken second away from Zearfoss. That put the feared #49 hot on the heels of the #17 with a three-lap sprint to the checkered flag upcoming.

All it took was a stellar restart to offer Sweet the launch he needed into turn one to clear Haudenschild with a slider for the lead. From there, he survived an additional two laps and crossed the stripe with an advantage of 1.508-seconds over Carson Macedo, who snookered Haudenschild as well.

The win marked Sweet’s third in three nights, his fifth in five Missouri races, his eighth in 18 season events, and the 66th of his World of Outlaws career, which ties him with Craig Dollansky and Bobby Davis Jr. for 12th all-time.

“We’ve still got a long summer ahead of us with a lot of big races left,” Sweet said on their early success. “We’ve got to keep our heads down, keep capitalizing, keep executing, and keep winning. We’re the best team out here and I feel like I’m at the highest level I’ve ever been at as a driver. I want to win as many as possible this year.” 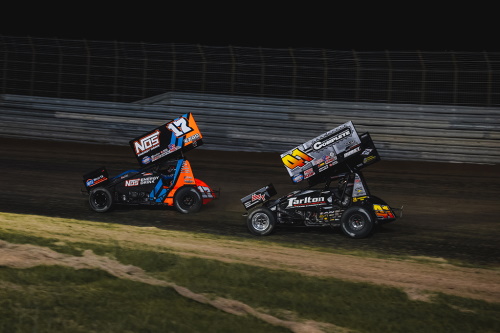 Following Sweet by Haudenschild to take second on the final restart was Carson Macedo, who drove the Jason Johnson Racing #41 to his tenth consecutive top-10 finish.

“Our car was really good, but I just felt like there were parts where we fell in in line and I couldn’t make something happen,” Macedo noted on his race. “I found the rubber before Brock [Zearfoss] because of a lapper, and then Sheldon [Haudenschild] got so tight on the bottom I got by him. Looking forward to a weekend at Eldora next!”

The story of the race ultimately ended up third as Haudenschild faded to the show position on the final restart.

“We just got beat,” Haudenschild admitted. “I let my guys down. We had the winning car, but the driver didn’t get it done. It doesn’t matter how many you lead, we have to hang on for that last lap. I got too snug on that restart and let Brad get by. He’s the guy to beat right now and that’s really motivating us to get better.”

Closing out the top ten on night two of the FVP Platinum Battery Showdown was Kyle Larson in fourth, Donny Schatz in fifth, Brian Brown in sixth, Brock Zearfoss in seventh, Giovanni Scelzi in eighth, David Gravel in ninth, and Logan Schuchart in tenth.

UP NEXT – The World of Outlaws NOS Energy Drink Sprint Car Series will make their first appearance of the season at Ohio’s Eldora Speedway next Friday and Saturday, May 7-8. Let’s Race Two features the USAC National Sprint Cars on both nights at the 1/2-mile. 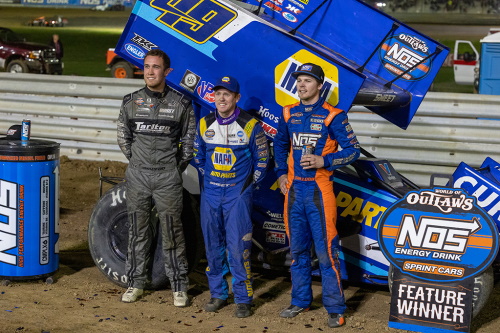