In the Jr. Dragster classes, Hunter Davis ran the table in his Hanson, Kentucky-based ’20 Halfscale dragster, qualifying No. 1 and claiming the Coolshirt Systems Pro Jr. Dragster event win with a 7.927 on a 7.90 dial-in in the final round. Davis defeated Blake Combs, who ran a 7.917 on a 7.90 dial but had a slower reaction time. Eli Wiggins picked up the win in Classic Graphix Top Jr. Dragster, running an 8.924 on an 8.90 dial-in to beat Parker Deweese and his 9.087 on a 9.00 dial-in. 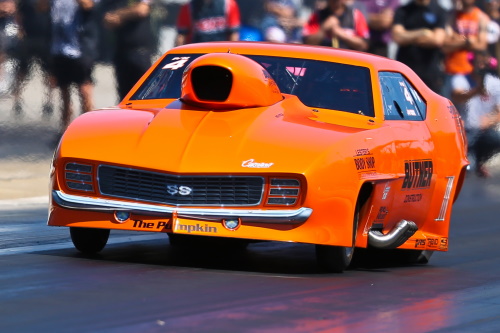 PRO NITROUS
After struggling for the last eight months, Jay Cox was motivated to get back to winning form in his Buck-powered Butner Construction “Pumpkin” ’69 Camaro. The consistent top 3 player found his way back to the winner’s circle for the first time since July 2020, using a .003 reaction time paired with a 3.665 at 205.35 to beat Ron Muenks and his quicker 3.656 at 206.16 in the final round.

“Man, this win is huge,” Cox said, thanking sponsors like Butner Construction and Smithfield Collision, as well as engine builder Charlie Buck. “Everybody knows I struggled all year last year. We fought and fought and fought. I finally figured the problem out about two weeks ago. We went and tested at Darlington for 3-4 days and made sure we fixed the problem. To come out here and run like we did round after round and not tear anything up, that’s the win for me. Getting the trophy and the check at the end of the day is just icing on the cake.”

Cox and the fan-favorite “Pumpkin” Camaro showed promise in qualifying with a No. 2 effort, which was followed up by a 3.737 at 204.73 to eliminate Rob Hunnicutt in the opening round. He stepped up to a 3.692 at 204.42 in a second-round victory over John DeCerbo and his 3.731. A semifinal bye run into the final allowed Cox to push the limits, ultimately clicking it off on a 6.337 pass.

Muenks made it past the first round with a 3.947 over Dave Roemer. Muenks and tuner Jeff Pierce continually stepped up in each following round, using a 3.685 to beat Jim Halsey’s matching 3.685 and a 3.66 to move on around Tony Wilson and his 3.708 in the semifinals. 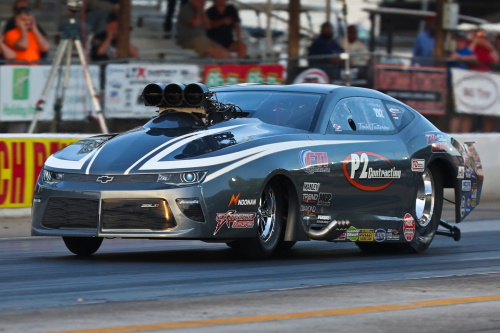 PRO BOOST
Todd “King Tut” Tutterow continued to pick up momentum in his return to Pro Boost competition as a teammate and tuner for P2 Racing team owner Kurt Steding. Even though Tutterow had one of the quickest cars in each round, he won three of four rounds on the starting line when his opponents went red. In the final round, Randy Weatherford left .003 too soon on a 3.644-second pass, while Tutterow cut a .008 light and slowed to a 4.864 at 105.23 after losing traction.

“I had three red lights [in the other lane], but I guess that’s the intimidation factor sometimes,” Tutterow said. “We made good, consistent laps. We were quickest or second quickest every round except the last round. I just tried to rotate the earth up there. It happens every now and then. Thanks to Kurt Steding; he allows me to be here with P2 Racing. It’s a dream come true to run PDRA like this this year.”

Driving one of two screw-blown P2 Contracting ’20 Camaros, Tutterow worked his way through eliminations with progressively quicker passes. His 3.686 at 208.91 eliminated Chris Cline, then a 3.679 at 207.46 beat a red-lighting Jeff Rudolph. Tutterow recorded a weekend-best 3.643 at 210.11 in the semis next to Kevin Rivenbark, who benefited from Tutterow’s red light in the semifinals at the last race.

Weatherford, who qualified No. 2 in his ProCharger-boosted WS Construction ’17 Camaro, used a holeshot advantage to defeat Steding in a 3.704-to-3.701 first-round match. He improved to a 3.659 alongside a red-lighting Johnny Camp in the second round, then sailed to a 3.646 while Jason Harris went .002 red in the semis. 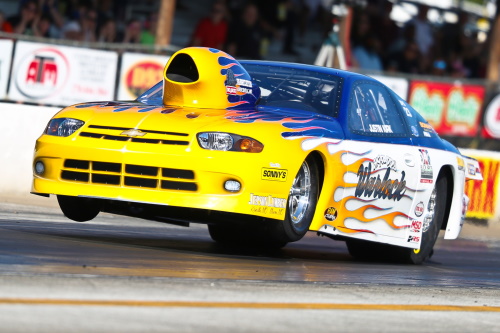 EXTREME PRO STOCK
The Cinderella story of the weekend happened in Extreme Pro Stock, where third-generation Mountain Motor Pro Stock racer Justin Kirk enjoyed the biggest weekend of his young career. Driving the Buck brothers’ “Big Daddy Warlock” ’05 Cavalier, Kirk qualified No. 2 and fired off a career-best 4.063 at 177.07 in the final round to defeat 2018 world champion Steven Boone and his 4.076 at 177.07.

“I really don’t know how to feel,” said Kirk, who made the trip to Bowling Green after another race was rained out in Texas. “This is all I’ve ever wanted to do, race a Pro Stock car. It’s just a dream come true. If there’s a long-haul award, we’d get it this weekend. Eddie and W.R. [Buck], we work so hard. A lot of people don’t realize how much it takes to run one of these cars. It’s not easy, but we got the job done. I’m proud of everyone involved.”

Boone, who reached the final round at the season-opening East Coast Nationals but couldn’t make it to the starting line for the final, raced to his second consecutive final round on the strength of two holeshot victories. His 4.089 beat Elijah Morton’s 4.085 in the first round, then his 4.116 topped 2019 world champion John Montecalvo’s 4.102 in the semis. 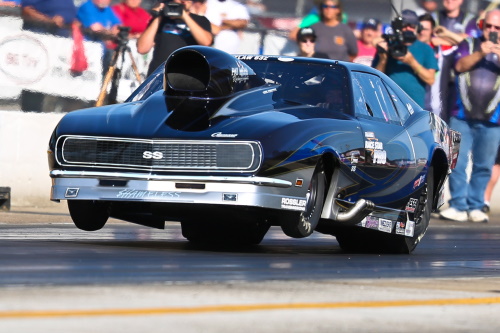 PRO OUTLAW 632
In a rematch of the final round from the East Coast Nationals, defending Pro Outlaw 632 world champion Wes Distefano evened his score against fellow $hameless Racing driver Jimmy Pelcarsky. In the final round, Pelcarsky left before the tree activated, while Distefano posted a 4.166 at 170.54 in his Musi-powered Race Star Wheels/$hameless Racing ’68 Camaro to take the win.

“This win means everything,” Distefano said. “Obviously, we’re in a great place as far as the points chase goes with a runner-up and a win. The car just did great. I can’t say enough about my crew. We had a bit of adversity, had to swap engines and we got through that and were able to seal the deal. It’s always good to have the challenges and overcome them.”

Pelcarsky in his Hutter-powered $hameless Racing ’15 Camaro defeated Mike Clark in the first round with a 4.207 before dipping into the 4.10s twice. The Ohioan’s 4.174 beat Brian Clauss in the second round, then a 4.151 over Chris Holdorf sent Pelcarsky to the final round.

TOP SPORTSMAN
Past Top Sportsman world champion Chris “Nitrous” Nyerges earned his first Elite Top Sportsman victory after moving up to the quicker category over the winter. Driving a Buck-powered ’20 Corvette for Dr. Gary Schween, Nyerges coasted to a 5.98 on a 3.84 dial-in in the final round, while John Benoit broke out with his 3.784 on a 3.79 dial.

Defending world champion Stacy Hall collected the Top Sportsman 32 win in his Fulton-powered ’63 Corvette, using a 4.297 on a 4.28 dial to win the final round over Nick Meloni, who posted a 4.343 on a 4.27 dial in the runner-up effort.

TOP DRAGSTER
A pair of Midwesterners squared off in the Elite Top Dragster final round in a pair of centrifugally supercharged dragsters. Missouri’s Jeff Libla in his Vortech-equipped ’20 Miller entry got the win on the starting line when Illinois’ Al Peavler left .005 too soon in his ProCharger-boosted ’13 American dragster. Libla still managed to lay down a 3.762 on a 3.76 dial-in to solidify the win.

The 2021 PDRA tour continues May 27-29 at the inaugural DeCerbo Construction American Doorslammer Challenge presented by Callies at Summit Motorsports Park in Norwalk, Ohio.