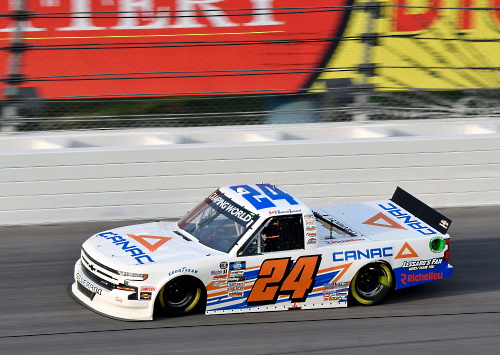 Kansas City – United States (May 2nd, 2021) – A few laps after starting 15th on the grid at Kansas Speedway Saturday night, Raphael Lessard quickly realized that his #24 Canac | Quincaillerie Richelieu Silverado understeered to the point of prematurely wearing out the right front tire so much that he was unable to keep up with the leaders. Raphael Lessard adapted his driving and fought his way back to the leaders after two long stops in the pits. His determination allowed the young Beauceron to make the most out of what he had and cross the finish line in eighth place.

The Race from the Driver’s Seat (extracts)

“The race tonight (Saturday) was not easy for me as I struggled with the #24 Canac | Quincaillerie Richelieu truck’s serious understeer throughout the race. The team made major set-up changes twice, but that did not fix the problem. The time lost working on the suspension during the end-of-segment pit stops dropped me to the back of the field but happily still on the lead lap. Over the last few laps, my right front tire was again used up. I tried to keep it as cool as possible for the last overtime restart and drove the last two laps “aggressively” to get the most out of what I had to work with. We are happy with eighth place under the circumstances,” said Raphael Lessard. 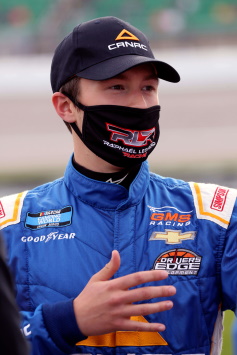 RICHELIEU HARDWARE
Richelieu is a leading North American distributor, importer and manufacturer of specialty hardware and complementary products. Its products are targeted to an extensive customer base of kitchen and bathroom cabinet, storage and closet, home furnishing and office furniture manufacturers, residential and commercial woodworkers, door and window, and hardware retailers including renovation superstores. Richelieu offers customers a broad mix of products sourced from manufacturers worldwide. Its product selection consists of over 130,000 different items targeted to a base of more than 90,000 customers who are served by 82 establishments in North America – 40 distribution centres in Canada, 40 in the United States and 2 manufacturing plants in Canada.

FRL EXPRESS Inc.
F.R.L. Express Inc. is a general transportation company founded in 2004 by François Lessard. Its main field of activity over the last 15 years is general transport in closed trailers over short and long distances in Canada and the United States. FRL currently have about 50 employees in addition to about ten tractors-trailer outfits. FRL owners are proud of the progress made in recent years thanks to the FRL team members and wishes to continue on this positive note. “Our employees, customer service and satisfaction are our priorities. We are all proud to be partners in the success and achievements of our son Raphael Lessard,” state the proud parents.