ATLANTA, GA (May 3, 2021) – The final NHRA Southern Nationals at Atlanta Dragway featured Tim Wilkerson and the Levi, Ray & Shoup Summit Racing Shelby Mustang team showing why they will be a tough competitor on race day throughout the 2021 season. With only one day of qualifying and tough track conditions race day became a situation where crew chief decisions and experience could not be discounted. On the strength of consistent runs on Saturday the Levi, Ray & Shoup Summit Racing Mustang started the race from the No. 6 position.

In the opening round Wilkerson took on Terry Haddock as the track conditions had improved over Saturday but remained very much in flux as the cloud cover began to burn off over Atlanta Dragway. Wikerson’s Mustang was the first car to hit the track in the Funny Car session and his tune-up set the tone for the rest of the class behind him when he thundered to victory with a stout 3.963 second run at over 320 mph. It was the quickest Funny Car run of the event and gave the veteran lane choice heading into the quarterfinal round.

“We knew the conditions were better today than on Saturday,” said Wilkerson. “I just put a tune-up in there that I thought would get us down the track and maybe give us lane choice. I wanted to run right around a 3.97 or 396 and that is what we did. I have a real good handle on this race car and it is a lot of fun to drive.”

In the quarterfinals Wilkerson pulled up beside No. 3 qualifier Matt Hagan. Once again Wilkerson and his Levi, Ray & Shoup Summit Racing Shelby Mustang showed their performance consistency and dominance. It was another three second run for Wilkerson but Hagan was just a little quicker and ended his chance to win the final Southern Nationals. Wilkerson’s last pass 3.985 seconds was the second quickest run of the session. 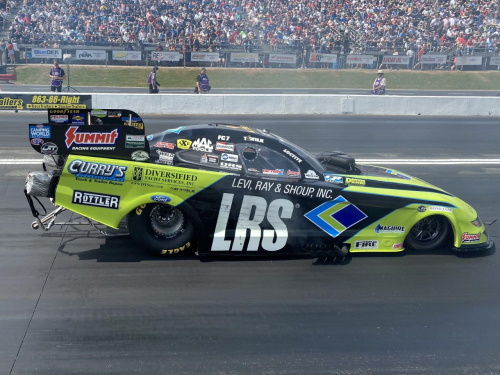 “We made good runs today and in the second round we just had the bad luck of running the guy that made the quickest run of the quarterfinals,” said Wilkerson. “We are getting good information and the whole team is doing their job. We are going rounds and as it is getting warmer we are still running good numbers. I am just going to keep fine tuning what I am doing. This is a lot of fun when you are winning rounds. I have to thank all the fans that came out this weekend for the last Southern Nationals.”