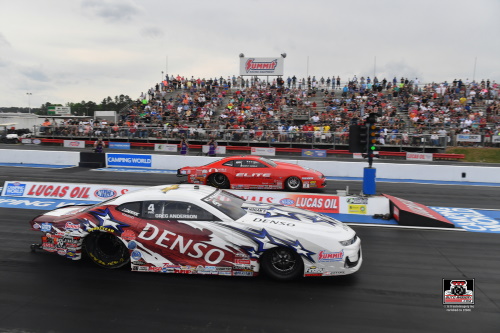 COMMERCE, Ga. (May 3, 2021) – The DENSO Spark Plugs-branded Chevrolet Camaro driven by Greg Anderson in Atlanta has been ferocious at each race so far in the 2021 season of NHRA’s Camping World Drag Racing Series, and that came in handy on Sunday at the soon-to-be-shuttered Atlanta Dragway. The four-time Pro Stock champion wanted to win the final trophy up for grabs at this weekend’s 40th Lucas Oil NHRA Southern Nationals, and he accomplished the feat with a final-round defeat of Vincent Nobile to take home the 96th Pro Stock trophy of his career.

Anderson had low elapsed time in each round of eliminations and used a 6.568-second pass at 209.04 mph to knock out Nobile’s 6.598, 208.78 in the final round of the Southern Nationals. En route to the title round, the veteran driver put Fernando Cuadra, Matt Hartford, and Erica Enders on the trailer.

“This is pretty crazy. It’s almost surreal and I couldn’t have scripted it any better,” said Anderson with the shake of his head. “We’ve had a great start to the seasonm but to come here knowing this is the last time we’re ever going to race here – there is so much on the line. I wanted my name to be in that record book as the last Pro Stock winner at Atlanta Dragway.”

With his fifth win at Atlanta Dragway, Anderson ties Warren Johnson, who he worked with as a member of the crew and then crew chief for many years before launching his own team, for the most wins at the venerable facility. He is also one win closer to tying Johnson for all-time wins in the category with 97.

“How fitting, to tie Warren for the most wins at this track,” said Anderson. “This is pretty cool, and it’s the way it should be. I guess it should end up a dead-locked tie here. It’s the perfect ending. We could argue down the road about who had the better Atlanta Dragway record, but the bottom line is that we’re tied, we’re equals, and I’m fine being equal with him any time. I’m going to savor this one, and I’m going to continue my pursuit of trying to tie him for the all-time wins record.”

Anderson earned the 109th No. 1 qualifier award of his career on Saturday at Atlanta Dragway, and he’s been the No. 1 qualifier at each race so far this season. He was the winner of the season-opener in Gainesville as well. 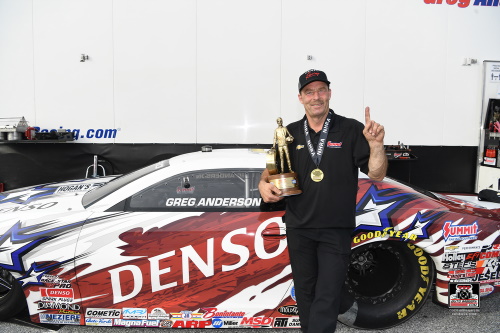 “I’m so proud of the guys and the work they’ve done, not only with my car, but with all five of our team cars,” Anderson said, referring to the KB Racing Pro Stock Chevy Camaros driven by teammates Kyle Koretsky, Deric Kramer, Matt Hartford, and Dallas Glenn. “My car has been the standout-superior so far, but any race we go to, any one of these five KB Racing cars could win the event. That’s a great feeling, and there is no question that they’re going to win races, too. It’s going to be a great season for this team, and I’m looking forward to it.”

“We had DENSO on the side of our car in Las Vegas, and I lost on a dead-heat. We made a small, tiny error in the second round, and we lost, but it doesn’t matter if it was by an inch or by a mile,” Anderson admitted. “They’ve been a great supporter of us for all these years, so I’m thankful we had another shot at it and got the deal done here. It’s great to be able to spotlight all the people that have helped us, because without all of them, we wouldn’t be where we are. I like this deal, and I’m having fun with it. I can’t wait for the next one. We’re proud of everyone we race with, and being able to honor them like this means a lot to everyone at KB Racing.”