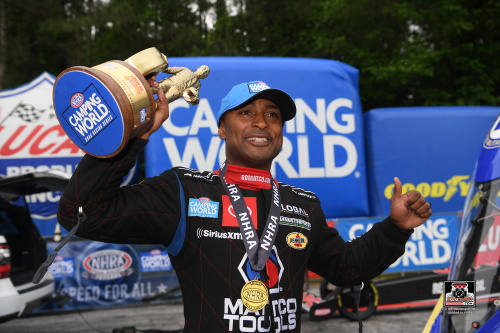 COMMERCE, Ga. (May 3, 2021) – Behind the wheel of Matco’s ‘Tools for the Cause’ benefitting the Fisher House Foundation/Toyota Top Fuel dragster, Antron Brown raced to victory, capturing the last NHRA Southern Nationals Top Fuel Wally trophy as the curtain closed on the annual Atlanta Dragway event after an incredible 40-year run.

Brown’s historic triumph on Sunday was his 68th overall and moved him into a two-way tie with Joe Amato on the all-time Top Fuel win list where they rank third with 52 victories. Brown, who has wins in both Top Fuel and Pro Stock Motorcycle at the Commerce, Ga. venue, remains seventh on the all-time driver win list but is now within one win of tying legend Kenny Bernstein’s 69 victories. Among active NHRA drivers, the Pittsboro, Ind. resident ranks third overall and tops the Top Fuel leaderboard.

Brown’s march to victory began from the eighth-seeded position where he drew Doug Kalitta as his round-one opponent. The two Top Fuel titans were the first drivers to hit the track on Sunday morning and kicked off what would become a spectacular day of close-call races among NHRA Camping World Series competitors. Brown and Kalitta were nearly even leaving the starting line with Brown’s machine barreling down the track in 3.793 seconds to narrowly beat his competitor’s 3.800 E.T. In the quarterfinals, Brown faced Billy Torrence. The three-time Top Fuel world champion nabbed the starting line lead and never trailed, taking his win light into the semifinals against Brittany Force. Once again, Brown used his quick reflexes to activate the win light, capturing the holeshot victory to set up a meeting with reigning Top Fuel champion, Steve Torrence, in the final round.

In his 125th championship round, Brown drove the Matco Tools/Toyota/SiriusXM/Global Electronic Technology/Hangsterfer’s machine to its first winner’s circle of the season by speeding through the finish line beams in 3.752 seconds at 325.22-mph to defeat Torrence for the very last piece of Atlanta NHRA hardware.

Brown, who now has seven Southern Nationals trophies in his collection, has advanced to the semifinals or better at each of the first three events of 2021, and the last five overall, including his 2020 season-finale triumph in Las Vegas. 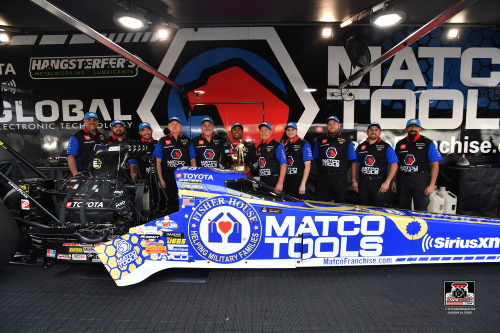 “It feels good. It feels really good,” said Brown who has been on a rebuilding mission, eager to be back in the thick of prime championship contention since reuniting with former crew chief Brian Corradi at the beginning of 2020. “This is what we work for each and every day. All of that hard work over the off-season and all the changes we made, and the testing we’ve done, and we’re just building on that, and we’ve got to keep building. We just kept on nipping at it each round and that’s what I love about my team so much, all of our Matco Tools boys. This is what they work hard for. We’ve got a lot of new players too. We have Matt Sackman who’s been here the longest, along with Brad Mason, Brian Corradi, and Mark Oswald, they’re my homeboys from back in ’09. The rest of the gang is all new to this Matco team. I’m so proud of all these guys and how they all pulled together and meshed so quickly.”

The Matco Tools/Toyota team’s stellar performance propelled Brown up to second in the standings where he sits within two rounds of taking over the point lead. 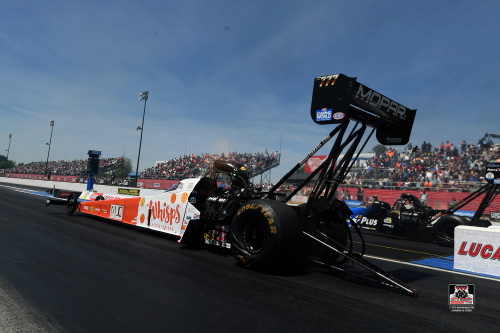 Race Recap:
Leah Pruett is one of the fiercest competitors in the series, and she was amped up on Sunday morning against her round-one opponent, Shawn Langdon. In an uncharacteristic move for the 2018 Southern Nationals event champ, Pruett double-stepped the throttle, and then her machine started dropping cylinders right at the hit. She had no choice but to be a spectator as her opponent drove away with the win. The round-one loss was Pruett’s first in more than a year, having carried the streak since Reading in 2019.

Quotable:
“We did not have the final farewell to Atlanta Dragway that we would have liked in the Whisps dragster this weekend. Our first-round win streak since September 2019 has finally ended, and to hold onto it for that long, that’s a great accomplishment for this team. We’re looking forward to Charlotte and the Four-Wides, and then Houston to start a new streak and build some momentum.” 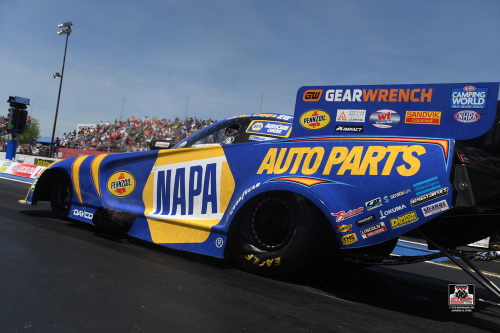 Race Recap:
Ron Capps returned to Atlanta Dragway as the defending NHRA Southern Nationals Funny Car event champion, and was looking to claim one last Wally from ‘Georgia’s House of Speed’ at the final running of the event. After a No. 1 qualifier at the season-opener, and a final elimination quad appearance at the previous event, Capps felt confident in his team’s ability to go deep into the elimination rounds on Sunday.

Saturday’s two qualifying sessions featured tricky track conditions which proved to be very challenging for most nitro crew chiefs, but the NAPA AUTO PARTS team used their NAPA Know How to unload with a stout 4.006-second pass which was second-quickest of the round. They returned to post a 4.039 E.T. in round two, making them the only Funny Car team to make a full pass in each of Saturday’s two sessions. Their strong performance earned them the No. 5 qualifying spot.

In round one, Capps extended his record to 12-0 over opponent Jim Campbell despite his machine losing traction and dropping cylinders near the top end. In the quarterfinals, he lined up opposite the only Funny Car driver with a higher win count than him – John Force. The decorated drivers were nearly even leaving the starting line and were neck-and-neck until just before the 1,000-foot timers when Force edged ahead, defeating Capps by a margin of victory of just fifteen-thousandths of a second.

Quotable:
“A great job by this NAPA AutoCare team to put the car together to go down both runs in a tricky track during qualifying which is no easy task. It was a very difficult track to get down there being that it was so hot.

“A not so great race day today. We tried not to beat ourselves first round and the second round is always a huge match-up with John Force, especially with this track and this being the last time in 40 years that we’ll race here. Force and I have had a lot of matchups at this track. I didn’t see his car, I didn’t even hear him, honestly. Our car moved out to the right and it might have had a cylinder out, but what a great race. I honestly thought the win light was burned out on our guardrail when it didn’t come on, that’s how close it was. Overall, another solid weekend. We had a lot of fun, and were able to entertain some first time guests from NAPA headquarters in their own backyard. Off to the Four-Wides next!” 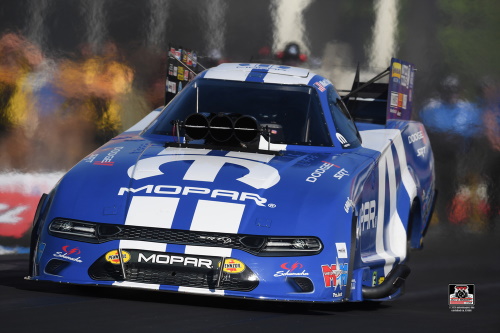 Race Recap:
Fresh off of a runner-up finish at the previous event, reigning world champion Matt Hagan was seeking his first win of 2021 on Sunday at the NHRA Southern Nationals and advanced to the semifinal round before his quest for one final Atlanta Dragway trophy came to an end.

Hagan and the Mopar Dodge Funny Car team battled through challenging track conditions during Saturday’s two qualifying sessions to earn the No. 3 spot on the strength of their 4.001-second Q2 run, which held up to be second-quickest of the round. Their solid performance allowed them to continue their streak of starting from the top half of the field for the 10th consecutive event. Despite the top-seeded qualifying effort, Hagan found himself in the unusual position of facing fellow three-time series champ Robert Hight in the first round, a showdown typically found in the later elimination rounds. In what can only be considered a monster match-up, Hagan rocketed the Mopar machine to the second-best run of the session (3.991 E.T.) to defeat Hight and extend his round-win record over the veteran driver to 19-16.

In the quarterfinals, Hagan gave up lane choice to Tim Wilkerson, the only driver to have made a quicker pass in E1. Once again, Hagan was quick and consistent, posting low E.T. of the round by speeding through the 1,000-foot timers in 3.947 seconds to set up a semifinal meeting with Bob Tasca III, who seems to be Hagan’s ‘kryptonite’ as of late, having beat Hagan in the final round at the previous event, and in the first round at the season-opener. Against Tasca, Hagan, who is considered one of the best leavers in the sport, powered to another stout sub-four second run (3.974 seconds) but suffered a rare holeshot loss to his opponent who clocked a 3.981 E.T.

Quotable:
“So, coming off of another tough race with Bob Tasca in the semifinals. He just seems to have our number right now but we’ve got a good car, we’re qualifying well and we have a lot of good racing ahead of us. I’m really proud of our team, everyone works well together. We’re running well, just losing really close races. It’s just one of those things where those close ones like that, yea they’re tough to swallow, but they make you dig deeper, make you work harder, and push yourself to get to the next level. Charlotte is our next event. I’m excited about that because it’s close to home. It’s another four-wide but we went to the final at the Vegas four-wide, so hopefully, we’ll take it one step further there. Looking forward to having some fun and keep pushing this Dodge Hellcat and put on a great show for everyone.”