ABBOTTSTOWN, PA (May 13, 2021) – The Pennsylvania Posse hasn’t had too many opportunities to let Brad Sweet know how they feel about him. So rightfully, when he finally scored his first-career Lincoln Speedway win on Wednesday night by beating two of their proud Posse pilots, they let the jeers and sneers rain down on The Big Cat.

Sweet loved it. He soaked up every jab as he stood in victory lane for the ninth time this season. 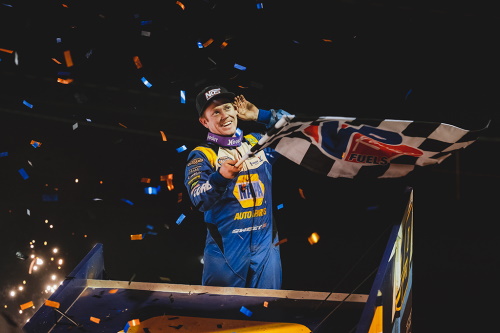 You see, this two-time World of Outlaws NOS Energy Drink Sprint Car Series champion is a west-coaster; he grew up on the bullrings of California near his Grass Valley home. And for years since he joined The Greatest Show on Dirt, Central Pennsylvania was his ultimate kryptonite. Not on this night, though.

Leading the final seven laps at Lincoln, Sweet capitalized on the lap traffic madness when Danny Dietrich spooked race leader Brent Marks and slowed him up, allowing the Kasey Kahne Racing, NAPA Auto Parts #49 to sneak by. He survived the closing laps and held on to narrowly secure the title at the 2021 Gettysburg Clash pres. by Drydene Performance Products.

“This is a fun little rivalry, I’m glad I could get the Outlaws another win,” Sweet said on the battle with the PA Posse. “I’m hearing quite a bit of booing up there, which I think is cool. That’s what this is all about, really. It’s about these huge crowds we get and putting on a show for the fans. We appreciate it whether they’re cheering or booing.” 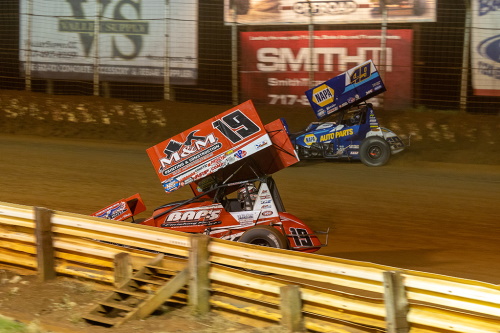 Before Sweet celebrated in the infield, a wild 35-lapper ensued at the Abbottstown, PA 3/8-mile.

Donny Schatz, the 10-time Series champion, led the field to green after winning the DIRTVision Fast Pass Dash over PA Posse legend, Lance Dewease. Schatz paced the opening 11 circuits aboard his Tony Stewart/Curb-Agajanian Racing #15 before Sweet entered the picture and ripped the top to lead Lap 12.

That didn’t last long as Schatz came back with a slide job into turn one and resumed command on Lap 13. While the Fargo, ND native controlled the top spot, Sweet brought 12th-starting Brent Marks of Myerstown, PA along with him as they mounted a challenge for the lead past the halfway point.

On Lap 24, Marks perfected the bottom off turns one and two to drive by Sweet down the backstretch, and soon after stole the lead from Schatz on Lap 25. The duo of Marks and Schatz continued to race side-by-side down the stretch until the polarizing Lap 28 half-spin by lapper Danny Dietrich changed the outlook of the race.

In an effort to avoid Dietrich, Marks and Schatz were both forced to take evasive action. The end result? It allowed Sweet and Anthony Macri of Dillsburg, PA to drive by them on Lap 29 of 35. The move shuffled Marks back fourth, but he came roaring back with a vengeance as he passed Schatz, then Macri, and set his sights on Sweet.

The #19M closed on the #49 lap-after-lap, but eventually ran out of time as Sweet took the checkered flag over Marks by 0.251-seconds.

“I think Brent had the car to beat,” Sweet admitted. “We had the car to run second, but was better than us at moving around and going through traffic. It’s still one of the best cars I’ve ever had here, but we need to recognize there’s room to grow. A win is win, though, especially in Central Pennsylvania. We had a bad weekend at Eldora, so to rebound with a win gives us some confidence going to Williams Grove.” 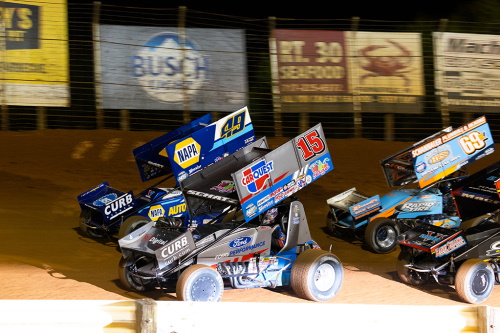 “He [Dietrich] just got all crossed up in front of me, and I had to check up and get over the cushion to get around him,” Marks said on the lap traffic incident. “It’s disappointing, but still a really great run for us. It’s a lot of fun to be up here battling guys like Brad and Donny like that. This car has been awesome lately. These World of Outlaws raced are never over until they’re over.”

Following Sweet and Marks at the Gettysburg Clash was Anthony Macri with his second-career World of Outlaws podium aboard the #39M.

“I just took advantage on that situation the best I could,” Macri mentioned on bolting to second late in the going. “We’ll take this and look forward to Williams Grove.” 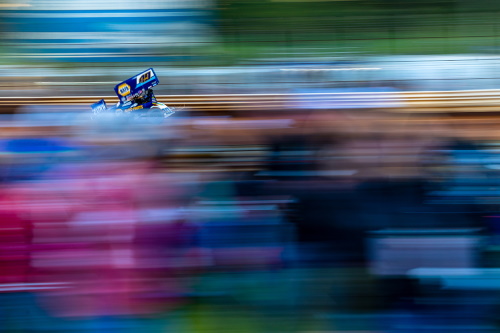 David Gravel ended up fourth aboard the Big Game Motorsports #2 and Donny Schatz faded to finish fifth in the mid-week show.

UP NEXT – The World of Outlaws NOS Energy Drink Sprint Car Series will take one day off before resuming the rivalry with the PA Posse on Friday and Saturday night with the Morgan Cup taking place at Williams Grove Speedway. 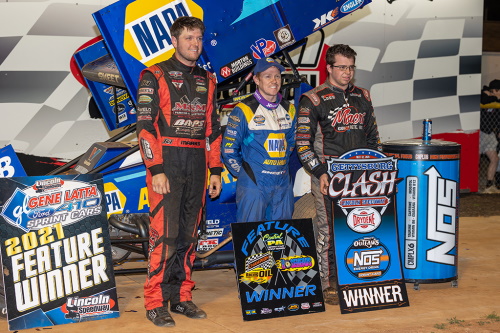