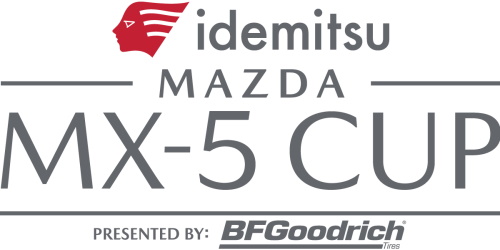 LEXINGTON, Ohio (May 15, 2021) – Mid-Ohio Sports Car Course never disappoints for close wheel-to-wheel racing and Saturday’s Idemitsu Mazda MX-5 Cup presented by BFGoodrich® Tires was no exception. Selin Rollan (No. 87 Hixon Motor Sports) was the victor in a six-way battle for the win in an all green-flag 45-minute sprint to the checkered flag. Sam Paley (No. 28 McCumbee McAleer Racing) and Justin Piscitell (No. 89 McCumbee McAleer Racing) completed the podium. 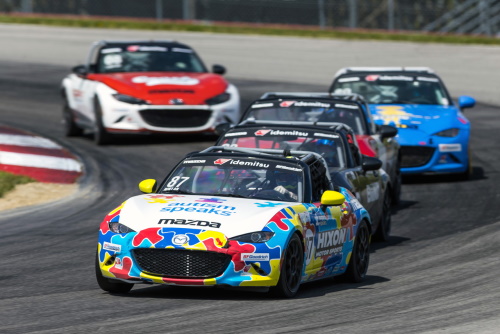 Now in his fourth season of Mazda MX-5 Cup racing, Rollan has never had much luck at Mid-Ohio. The 2018 Rookie of the Year felt as though his driving style never quite fit the 13-turn, 2.258-mile road course. All that changed when Rollan crossed the finish line 1.552 seconds clear of his nearest competition.

The front row of the grid represented the top two in the Championship coming into Mid-Ohio: Michael Carter (No. 08 Carter Racing Enterprises) on pole and Gresham Wagner (No. 5 Spark Performance) starting second. Wagner dropped his tires into the dirt in a few corners early in the race, which gave third-starting Paley plenty of opportunities to challenge him for the runner-up spot and enabled Carter to pull out a small gap.

Soon though, the pack of four cars behind Carter were able to work together and catch the polesitter. When they did, Rollan seized the opportunity to climb up to second and began his bid for the race lead.

Shortly after, Carter had a momentary issue exiting the keyhole that dropped him down the order down to fifth. Rollan was the new leader but being hounded by Paley who was in search of his first MX-5 Cup victory.

Paley led for a lap, but Rollan retook control and pulled away from the field to take his third victory of the season. 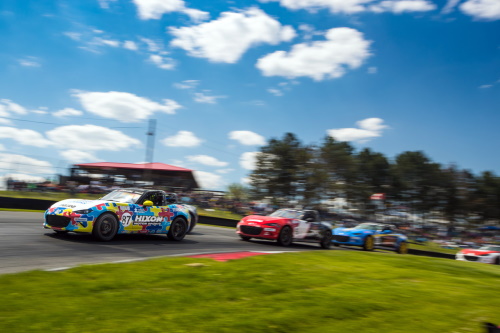 “It was good and the car was handling great especially at the end,” Rollan said. “Hixon Motor Sports set up a perfect car. It was really consistent at the end and went where I wanted it to go. I felt bad for [Michael] Carter when he had that problem. I was pushing him and we were trying to get away but then he lost power coming out of the Keyhole. I feel bad for him but on the other hand, for the championship, it’s nice to see podium without Michael [Carter] and Gresham [Wagner] for the points. The car is really good and hopefully we can keep that going in the race tomorrow!”

Paley, a rookie, has been knocking at the door of victory for some time now. He admitted he needed to work on his tire strategy in order to finally get that elusive win.

“Honestly, I didn’t feel any pressure when I was in front,” Paley said. “I felt the pressure more when I was behind and trying to catch up honestly. It was the first time I led this season so that was good. Unfortunately, we didn’t have the pace at the end. I had worked my tires pretty hard early in the race. 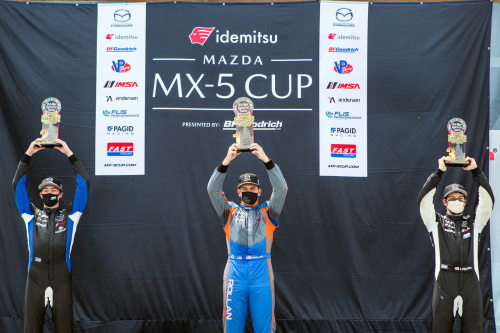 “I want to thank BiiND.app for the sponsorship help and to McCumbee McAleer Racing for such a great car. I knew I didn’t have the car at the end, so when I had the chance, I had to take it to make passes. It can be hard to pass here—every inside turns into an outside—you have to go in deep because you are trying to hold the outside when some else is holding the inside and it can go on for more than one corner. I’m happy with the points in the bag. It was a good race and I’m happy to be back on the podium.”

Piscitell started sixth but showed tremendous race pace. He picked his way through the intense six-way battle for the podium and wrestled the final spot away from Wagner in the closing laps of the race.

“I’m pretty excited about it,” Piscitell said. “It feels like I’m long overdue. We’ve had a car for the podium multiple times, but we’ve had some issues here and there; some just bad luck, some my fault. I’m super happy to be here and represent Matty’s Light. I went conservative at the start of the race and gapped P6, and I tried to use the draft and not destroy the tires to save up for a hard charge at the end. I think I waited too long to try to charge back through at the end.”

Wagner eventually crossed the finish line in fourth. He will start on pole for Sunday’s Round Eight race.

Jared Thomas (No. 96 JTR Motorsports Engineering) completed the top five. Thomas made contact with the tires in Friday’s practice and had to borrow another car to continue taking part in the weekend. Thomas qualified eighth and was on his own for much of the 45-minute race, but he was able to catch the lead pack just in time to finish fifth.

Luca Mars (No. 41 Copeland Motorsports) won the Hard Charger Award for advancing from 11th to 7th.

MX-5 Cup drivers will have the opportunity to take what they learned today and apply it to Sunday’s Round Eight race, which starts at a nearly identical time: 11:45am ET. The race will be streamed live on IMSA.com/tvlive and NBC Sports Gold TrackPass.