TERRE HAUTE, IN (May 28, 2021) – Friday’s originally scheduled World of Outlaws NOS Energy Drink Sprint Car Series event at Terre Haute Action Track has been postponed due to afternoon showers hitting the track with more rain on the way.

World of Outlaws and Terre Haute officials are working together to find a new date for the event at the historic half-mile speedway.

For fans who have already purchased tickets to Friday’s show at Terre Haute, you can use those tickets for the rescheduled date. Once the new date is announced, those unable to make it to the rescheduled date will have the opportunity to request a refund.

Up next for the World of Outlaws NOS Energy Drink Sprint Car Series is a Memorial Day special on Monday, May 31 at Indiana’s Lawrenceburg Speedway. Fans can BUY TICKETS HERE. 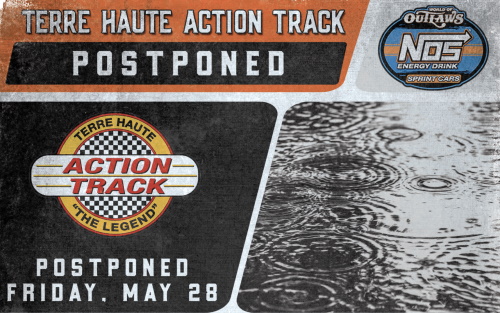