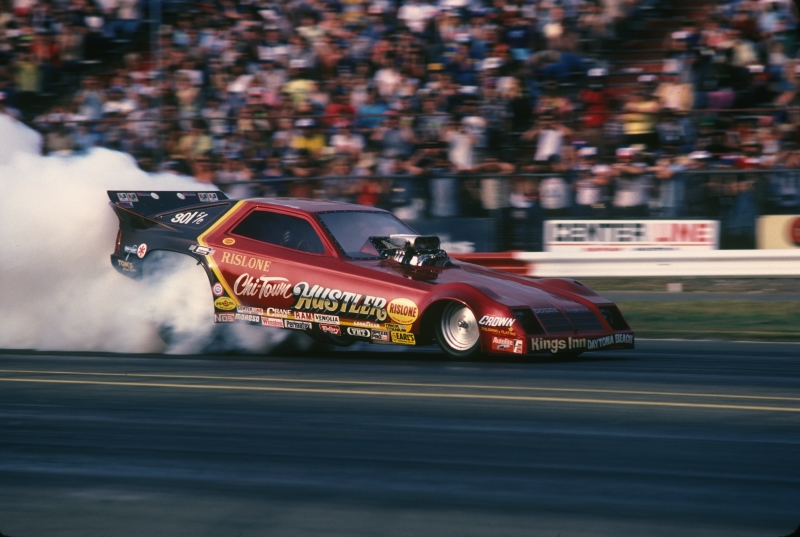 GAINESVILLE, Fla. (Mar. 16, 2016) – The NHRA will honor a former Funny Car world champion and some rocking hot rods will be on display at the 47th annual Amalie Motor Oil NHRA Gatornationals at Florida’s Gainesville Raceway. The NHRA will continue its celebration of the 50th anniversary of Funny Car and the fan-favorite Hot Rod Junction will provide fans with a stellar race car exhibit during the third of 24 NHRA Mello Yello Drag Racing Series events, March 17-20.

Two-time NHRA Mello Yello Series Funny Car world champion Frank Hawley will be honored during the Gatornationals pre-race ceremonies as the NHRA 50th Anniversary of Funny Car dignitary. Hawley, inducted into the International Drag Racing Hall of Fame in 2014, won the 1982 and 1983 NHRA Funny Car world championships driving for legendary tuner Austin Coil at the controls of the famed Chi-Town Hustler. He has nine NHRA victories under his belt and is one of only 15 drivers in NHRA history to earn national event victories in both Top Fuel (2) and Funny Car (7). For the past three decades Hawley has been teaching and licensing drivers who attend his Frank Hawley’s Drag Racing School.

In addition to the vintage Funny Cars, Hot Rod Junction will be showing off more than 30 of the region’s coolest hot rods. Included on the list of the cars that will be featured is three-time NHRA Top Fuel champ “Big Daddy” Don Garlits’ 1927 Ford T Roadster. With 35 NHRA national event wins in a near seven decade career, Garlits, now 84, was voted NHRA’s No. 1 drag racer of all-time during the NHRA’s 50th anniversary celebration in 2001 and currently owns and operates the Don Garlits Museum of Drag Racing in Ocala, Fla.

The Hot Rod Junction cars and trucks will be on display at the track throughout the weekend and on Sunday will line up for a parade in front of the main grandstands.

The AMALIE Motor Oil NHRA Gatornationals is one of the most tradition-rich events on the NHRA circuit and annually serves as the East Coast season opener. Top Fuel, Funny Car and Pro Stock teams will be joined by the Pro Stock Motorcycle class for its season-opening race in what promises to be an exciting weekend of racing at Gainesville Raceway. NHRA stars John Force, Tony Schumacher, Erica Enders, Andrew Hines, Ron Capps, Cruz Pedregon, Antron Brown, Courtney Force, Leah Pritchett and many more will be racing for victories and world championship points during the weekend. The racing will be televised on FOX Sports 1, including three hours of Sunday finals coverage starting at 1 p.m. (ET).