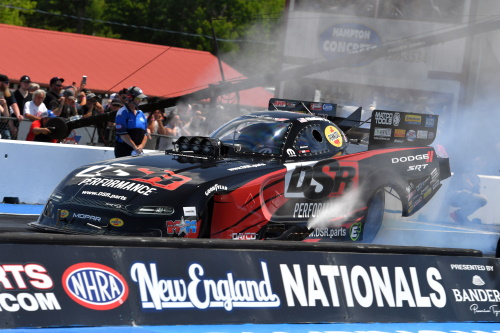 Epping, New Hampshire (June 13, 2021) – It looked to be a very promising race day for HEMI®-powered machines at New England Dragway for the TascaParts.com New England Nationals, the sixth National Hot Rod Association (NHRA) Camping World Drag Racing Series event of the season. Don Schumacher Racing (DSR) stablemates Matt Hagan and Ron Capps qualified No. 1 and No. 2 aboard their Dodge Charger SRT Hellcat Funny Cars, while Cruz Pedregon extended his season-long streak of qualifying in the top-half of the eliminations ladder with a sixth place seeding.

Reigning Funny Car world champion Hagan returned to Epping, New Hampshire, dragstrip as the defending three-time winner (2017, 2018, 2019) and in the hunt his first win of the 2021 season after taking his DSR Performance Mopar to the No. 1 qualifier position with his Friday evening run at 3.891 seconds at 331.53 mph. With that effort, Hagan earned three valuable bonus points and a first round bye. He powered his Dodge Charger SRT Hellcat to a 3.935 seconds/ 327.11 mph pass, the quickest of the opening round, to find himself paired with Tim Wilkerson for a quarterfinal showdown. The two competitors gave the crowd a great show and a close race but Hagan’s 3.983 sec./328.06 mph was just short of Wilkerson’s 3.956/324.44 mph winning pass to defeat the defending event champ.

Hagan’s teammate Capps earned his No. 2 qualifier position with his NAPA Auto Parts Dodge Charger SRT Hellcat’s 3.941-second pass at 315.42 mph in Q2, and then backed that up with the third quickest pass in Q3 to earn a total of four bonus points. A two-time winner at the New England Nationals (2014 and 2016), Capps came out strong in the opening round against No. 13 seed Terry Haddock in order to take advantage of a quarterfinal bye opportunity, but sparks appeared at half-track causing a sudden lack of traction. He tried to wrangle his ride but ultimately saw his opponent squeak by as they approached the finish. While fire made an appearance beneath him, Capps brought his Funny Car to a safe stop and immediately turned his focus to the next event in Norwalk, Ohio, in two weeks.

Also qualified in the top half of the Funny Car eliminations ladder for a sixth consecutive event this season was Pedregon who earned the sixth place starting position by taking his Snap-On Tools Dodge Charger SRT Hellcat for a 3.969 second run at 326.71 mph, the fastest speed in final qualifying. That effort set up with a first round match-up against No. 9 qualifier J.R. Todd and, looking to build on the Pedregon Racing team’s season-long progression, the veteran driver came out swinging. Pedregon hit the throttle and earned the starting line advantage with a 0.052-second reaction time to Todd’s 0.085-second launch. The two battled side-by side the length of the dragstrip to cross the finish line within just 0.0003 seconds of each other. Unfortunately, the approximately two-inch margin of victory was not in Pedregon’s favor as his 4.027/321.73 mph run was edged out by Todd’s winning 3.994/322.88 mph pass.

In Top Fuel competition, DSR’s Leah Pruett marked her NHRA silver anniversary with a silver ribbon displayed on her HEMI-powered dragster’s roll cage and tenth seeded position heading into race day in celebration of her racing debut 25 years ago as an eight year-old in Junior dragsters. From the hit, Pruett took her DSR Precision Manufacturing Mopar Dodge//SRT dragster straight down the lane for her quickest pass of the weekend at 3.771 sec./324.28 mph to dispose of No. 3 qualifier Justin Ashley in the opening round. Pruett had a similarly strong run in the quarterfinals against No. 4 seed and Top Fuel points leader Steve Torrence, posting a 3.811/323.12 pass to her opponent’s 3.823/320.13, but a quicker start gave him the edge he needed and the holeshot victory to end her day.

“It was a pretty good weekend at Epping. We qualified No. 1 for the first time this year and got that yellow Camping World hat. The car ran really good and we have a really good race car. We were just on the bad side of a good drag race that second round against Tim Wilkerson. You’re gonna have those. You lose more than you win, but when you do win them, it makes them that much more special. Our turn is right around the corner, so I’m really looking forward to Norwalk. We’re doing everything right to turn on the win lights, but sometimes you get on the bad side and that’s just racing. Last year we were on the right side of most of those races. You pay your dues, work hard and it will come around for you and that’s what we’re doing right now. We’ll roll into Norwalk and be excited for a great weekend. We’re glad to get DSR Performance and the DSR parts website some good exposure with getting the No. 1 qualifier. That car looked good and it ran good too. There’s so much racing left this season. This is only our sixth race in and there’s so much racing left, but it’s all about the finish and we’re a marathoner, not sprinting.”

“Haddock has been running well and we knew we couldn’t take them lightly, so we definitely were prepared to lay down a good number. ‘Guido’ (crew chief Dean Antonelli) came on the radio and said ‘we need to make sure we win this round’ because we knew there was a Bye into the semis and you can’t take that for granted. The car was driving fine, it was smooth, it didn’t seem out of control, and all of a sudden, the tires came loose. I waited and gave it a pedal and then the car blew up and caught fire. I didn’t even realize it at that point because I was trying to stay on it and get ahead of Haddock, and then just before the finish line, I saw him drive by. By then, my legs started to feel really hot so I just wanted to get the car stopped and get out of there. The fire burned up my suit pretty badly, and I’ve got to give credit to Impact Racing. My Impact firesuit protected my legs, and other than a little soreness, I’m alright. The suit did what it was supposed to do. The whole situation is a bummer because if we would’ve won that round, we would’ve had an automatic Bye to the semis, so it’s just disappointing to give up rounds like that. But, we’ll comb through all of the data, figure out why it smoked the tires, and head to Norwalk.”

“We had a solid weekend here in New England. We qualified sixth and kept our streak of qualifying in the top half of the eliminations ladder for the entire 2021 season alive. I think the worst we’ve qualified was eighth so far. The opening round was a great race against J.R. Todd and it was literally a race of inches. Unfortunately, it didn’t go our way but it was a great effort. We’re getting better but have a few kinks we still have to work out. I feel like we’re on schedule to have some great runs here coming up in the near future. We’re looking forward to going to our next race in Norwalk and shortly thereafter, our Western swing starting out in Denver for the Dodge//SRT Mile High Nationals and then California. Overall it was a good weekend and we ran top speed of all the cars, even Top Fuel, in Saturday’s final qualifying effort with a 326 mph pass, so it shows that the HEMI power is there. We’re putting it to the ground and we’re just looking to improve little by little, and start winning these close rounds.”

“A second round exit is not what we had in mind for this DSM Manufacturing dragster today. The silver lining on the weekend is that we have a car that is having conversations with us. We had second quickest ET of round one and that was awesome with that (3).771. We were behind a little bit after having some bad data from the weather station. The team did a phenomenal job of getting us qualified and into a winning position on race day. The first round win was great. We had never been able to beat Justin Ashley before, so that was a boost for this team. The second round was just a good, close drag race. We lost on a holeshot and that’s on me. Walking away from this, we have a race car that is properly working and we’re now very confident heading into Norwalk where we get to pull double-duty with the Dodge SRT dragster and Factory Stock (Showdown) Drag Pak.”