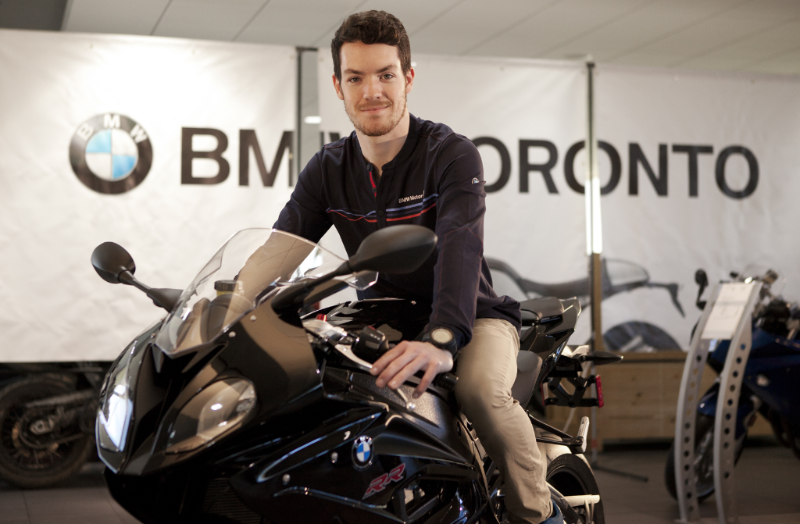 2016 marks a very special milestone for the global BMW brand as it celebrates its 100th anniversary.  The centenary year got underway on March 7, 2016 and over the coming months the company with its brands and services will look ahead to the next 100 years.

Not only will this be Young’s first venture into the premier Superbike class this will also be his first-ever season on a BMW and his first full season racing on Canadian soil since he won the PRO GP125 R.A.C.E Championship in 2010.

A rider with tremendous international experience, including the Scottish Nationals, U.S. Red Bull Rookies Cup try-outs, British Superbike, Grand Prix wildcard, Young’s racing career has been extensive for any rider of his age. In 2014, he split his time between racing British Superstock in the UK and AMA Daytona SportBike (now MotoAmerica Supersport) in America, scoring solid results in both.

The resident of Collingwood, Ontario spent this past season racing in the U.S. with the powerful RoadRace Factory team in the MotoAmerica Supersport championship where he earned his first MotoAmerica podium at Road America along with several top 5 finishes. In 2015, he also achieved two podium finishes at home in Canada during a one-off race weekend at Canadian Tire Motorsport Park.

Much like BMW’s heritage Young has always set his sights firmly on the future and has been a consistent force poised to take on new challenges and emerge stronger for them.

“BMW Motorrad Canada is proud to partner with Ben Young in 2016. We’ve closely followed his racing career in British Superstock and in MotoAmerica Supersport.  Not only have his results been impressive we know his professionalism on and off the track will represent the BMW brand well. We are delighted that his first venture into the premier Superbike class in Canada will be aboard the BMW S1000RR.  We look forward to an exciting and successful season.” said Chris Duff, Manager, Motorrad Marketing

This season also marks the fifth consecutive year the 22 year-old will be sporting the iconic Canadian Tim Hortons’ brand through franchisee Gilles Bolduc, a former Canadian roadracer himself. This time Young will be waving the Tim’s flag in Canada after taking the brand abroad to the UK and across the US. Also returning are long time partners Custom Home Builder and Renovation specialists Scot-build Developments Inc as well as AXO Racing will have Young protected with their premium race suits, gloves and boots.

After a brief respite the proud Canuck with the Scottish lilt will once again don an Arai Helmet for maximum safety and comfort as well as welcoming back K&N Filters, Hindle Exhaust, Woodcraft and Vortex Racing.

New partners for 2016 include; Epic Racewear, who will keep the crew looking and feeling Epic with custom crew shirts and KarmaComa Studio who will document Ben’s first season racing on Canadian soil and will delve further into the history and future of the iconic BMW brand on its 100th anniversary through a multi-part YouTube series.

Young recently picked up his BMW S1000RRs at BMW Toronto which was documented by KarmaComa Studio in this video:

Scott Cartier, designer and technician at Hindle Exhaust Systems will be Young’s Chief Mechanic for the 2016 CSBK season.

“I’m stoked to start my new journey in the MOPAR Canadian Superbike Championship. The BMW S1000RR’s stock power is unbelievable and it’s the epitome of a superbike.  I can’t wait to work with Scott Cartier on preparing the bikes for the 2016 season and testing as soon as we can.”  said Young

The 22 year old pilot of the #86 BMW S1000RR is also a proud “Laps for Muscular Dystrophy” (Laps4MD) rider who’s pledged to donate $1 for every lap he lead this season. These donations go to Muscular Dystrophy Canada to help make a difference in the lives of over 50,000 Canadians affected by a neuromuscular disorder.