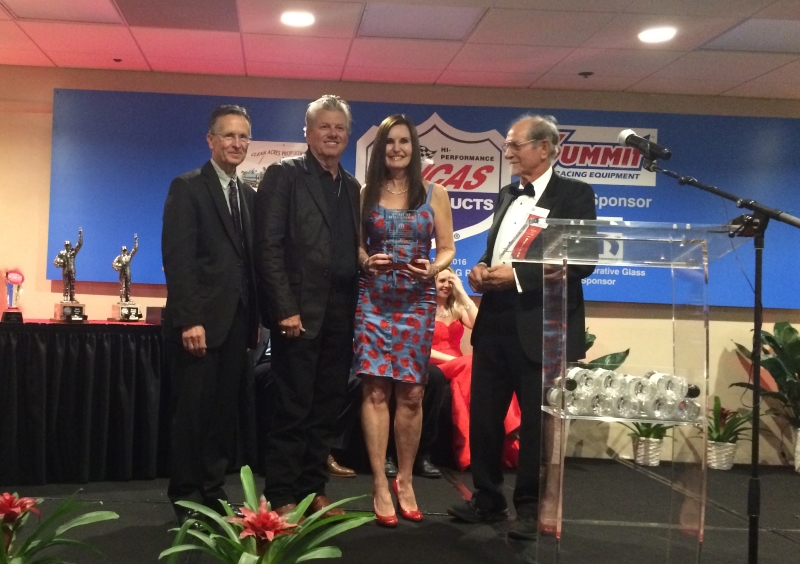 GAINESVILLE, FL (March 17, 2016) — During the International Drag Racing Hall of Fame banquet tonight Laurie Force was honored with the Pat Garlits Memorial Award presented by Mopar. Force, the wife of 16-time Funny Car champion John Force and mother to NHRA standouts Ashley Force Hood, Brittany Force and Courtney Force, has been a fixture on the drag racing scene for over four decades. The award was presented in recognition of Force’s presence behind a drag racing dynasty whose dedication and passion embodies the spirit of Pat Garlits while also being the ever patient wife of 16-time champion John Force.

“In the early days Laurie wrote my first contracts, mixed fuel and backed the race car up. She was with me from the beginning and there is no doubt I would not be where I am today without the support and love of Laurie,” said a proud John Force during the ceremony.

Named in honor of Don “Big Daddy” Garlits’s late wife the Pat Garlits Memorial Award was first presented in 2014 to Barbara Hamilton, the first woman licensed by NHRA to drive supercharged cars in 1964. Joan Gwynn was honored in 2015 for her contributions to the drag racing community as a supportive wife of 57 years to drag racing legend Jerry Gwynn, mother to racer Darrell Gwynn, as well as her charitable work with the Darrell Gwynn Foundation, and especially her involved with the Drag Racing Association of Women (D.R.A.W.) which has helped injured drag racers and their families for more than 30 years.

Pat Garlits passed away in February of 2014. She was beside her husband Don Garlits as he amassed too many awards to count and set more records than any drag racer in history. The legendary racer and innovator claimed that no matter the awards and accolades he received over his career the best day of his life was when he saw Patricia Louise Bieger for the first time in 1952.  The couple was married for over 60 years and Garlits was faithfully by her side until the end of her life.

“She loved her man with all her heart, body and soul and never thought of anyone else but him. She was at dad’s side through every win, loss, crash, you name it, she was there,” said daughter Donna in Pat’s moving obituary.

During the ceremony the following tribute video produced by Ashley Force Hood and including interviews with Ashley, Brittany Force, Courtney Force and John Force was shown: