The PDRA’s future stars in the Jr. Dragster classes continue to impress with their level of competition. CJ Jenkins IV and Evan Cox both ran perfect 7.900s in Coolshirt Systems Pro Jr. Dragster, with Jenkins taking the provisional No. 1 spot with his faster speed. Mallory Mattox is the provisional low qualifier in Classic Graphix Top Jr. Dragster with a .003 reaction time in her Lynchburg, Virginia-based ’03 Halfscale. 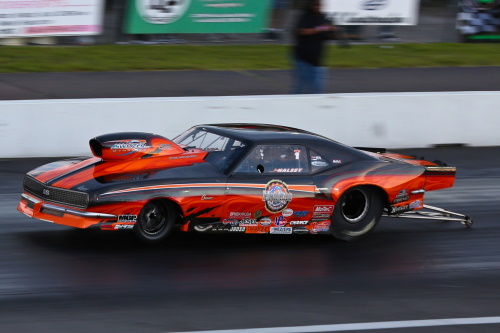 As a two-time and defending world champion in Pro Nitrous, Jim Halsey has won at several tracks on the PDRA tour. He’s still chasing his first win at his home track on the PDRA schedule, MDIR, but his 3.672 at 206.13 proved that his Brandon Switzer-tuned, Fulton-powered “Daddy Shark” ’68 Camaro is capable of getting the job done on Saturday.

“We get spoiled,” Halsey said, referencing his success in qualifying this season. “We went .73 this morning – I think we were No. 3 – and we were pretty upset about that. That wasn’t good. So it felt good to step up and go No. 1, especially since we’re close to home. I’d like to put on a show for our fans here. I think we’ll have a bunch of people from our racetrack [Cecil County Dragway] watching tomorrow, so hopefully I can bring it home for them too. I’ve never done well here, so hopefully tomorrow that will change.”

Another Maryland native, Fredy Scriba, qualified right behind Halsey with a 3.696 at 203.25 in his Musi-powered “Sorcerer” ’69 Camaro. Nazareth, Pennsylvania’s Mike “Mountain Man” Achenbach grabbed the No. 3 spot with his Buck-powered ’69 Camaro, capping off a string of consistent passes with a 3.698 at 205.04. 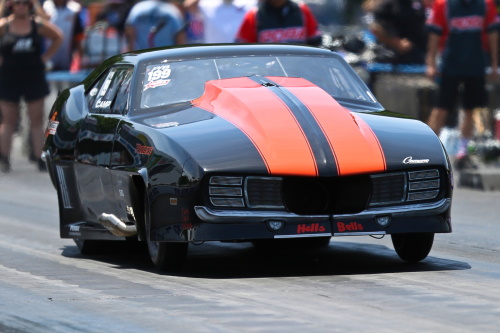 It took a track-record 3.639 at 207.56 for Johnny Camp and his ProCharger-boosted “Hells Bells” ’69 Camaro to lead an ultra-quick Pro Boost field. Camp, who won the season opener, was the quickest of 10 drivers in the 3.60-second range.

“It’s a tough class,” Camp said. “It’s the toughest racing I’ve seen in the years that we’ve been doing it. The class is really tight and I’m just happy that we’re as competitive as we are. I’m where I want to be. I owe it all to Proline Racing, my crew, NGK Spark Plugs, Tatman Electric and all my sponsors. That last pass felt really good and I think there’s a little bit more there.”

Two-time world champion Kevin Rivenbark qualified second in his ProCharger-boosted GALOT Motorsports ’69 Camaro, running a 3.662 at 204.45. Jason Lee, who won his first PDRA race at the last event, used a 3.669 at 206.51 to put Eric Gustafson’s Coast Packing ’69 Camaro in the No. 3 spot. 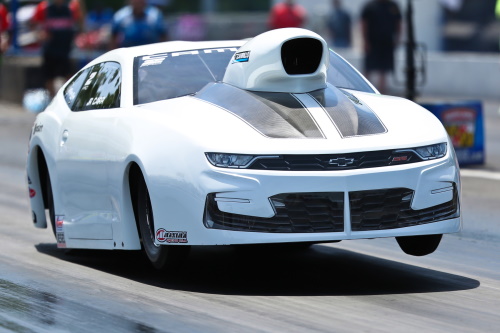 For the fourth time in as many races, JR Carr ended qualifying as the Extreme Pro Stock low qualifier in his white and black ’20 Camaro. Tuned by Mountain Motor Pro Stock veteran Frank Gugliotta, Carr posted a 4.053 at 179.54. It was Carr’s quickest of three consistent passes in the mid-4.00s.

“When you go down the track every time, it just gives you that confidence,” Carr said, thanking supporters Liberty’s Gears, Maxima Oil, CP Carrillo and RJ Race Cars. “When you go out there and shake the tires or spin real hard, you’re not going to make a full pass, and even if you do it’s not going to be very good. It’s been on a string. Even there it moved around a little bit, but it was controllable. It didn’t do anything ever that made me uncomfortable. The guys, like always, don’t miss anything. Great support, great morale – it makes it fun.”

Past world champion Steven Boone showed the potential of his Allen-powered Boone Motorsports ’07 Cobalt by running a 4.079 at 176.95 to qualify No. 2. Third-generation driver Justin Kirk, who won his first Mountain Motor Pro Stock race at the PDRA Kentucky race in the Buck brothers’ Cavalier, drove his father Doug’s ’18 Mustang to a 4.086 at 177.09 to qualify third. 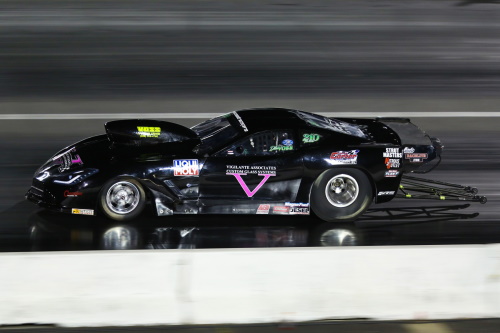 Two-time world champion Dillon Voss secured his first Pro Outlaw 632 low qualifier award of the season when he fired off a 4.175 at 171.34 to close out the final qualifying session. Voss and his brother, tuner Cory Voss, switched back to their tried-and-true clutch setup after experimenting with a torque converter earlier in the season, and the Floridian is back in championship form.

“I just gotta give it to my guys at the shop,” Voss said. “My dad [Kenny] and my brother and my uncle Mark, these guys work day in and day out during the week to really make this thing happen. Vigilante Associates came on board this year, plus we have support from James Carter Attorneys at Law, Liquid Moly, Strutmasters, Racelite Lithium, and $hameless Racing. We couldn’t be happier. We have a really good race car right now. We got power back. We got top speed of the meet right now. I just can’t be happier for this team.”

Daryl Stewart, who won the American Doorslammer Challenge at Norwalk in May, steered his Clayton Murphy-tuned Chassis Engineering ’12 Camaro to a 4.187 at 169.91 to follow Voss. Defending world champion Wes Distefano qualified third with a 4.202 at 171.08 in his Musi-powered $hameless Racing ’68 Camaro. 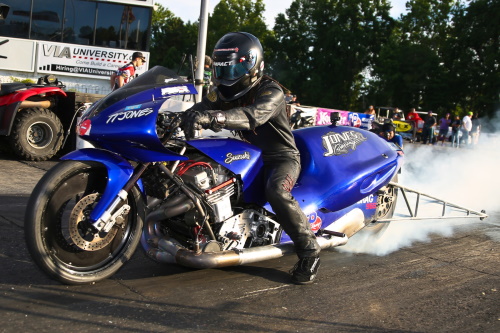 A couple other Pro Nitrous Motorcycle riders came close, but points leader Chris Garner-Jones was the only competitor to dip in the 3-second zone in qualifying. The second-generation rider clocked a 3.999 at 176.56 to lead the eight-bike field aboard his Jones Racing Hayabusa.

“It felt good because we came into the weekend kind of struggling a little bit,” Garner-Jones said. “We ended the day on a good note, though. We came to win. Hopefully we can keep it up. With my brother [William] calling the shots, I’m confident we can go after that win.”

Three other riders came within thousandths of a second of joining Garner-Jones in the 3-second zone. Brad McCoy posted a 4.002 at 175.50 to qualify second, followed by defending world champion Travis Davis with his 4.006 at 173.85. Motorcycle drag racing veteran Paul Gast ended up just outside the top 3 with his 4.008 at 175.57. 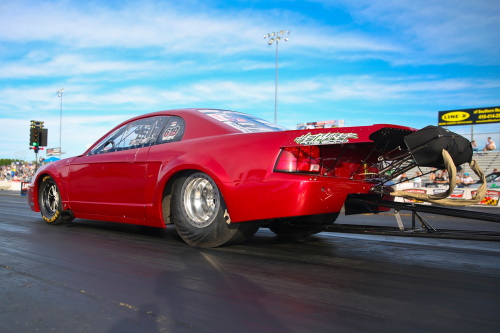 In the third race of the season for the Pro Street class, Jesse Lambert scored his second low qualifier award in his turbocharged ’04 Mustang. After struggling in Thursday testing, Lambert and his team made major changes for Friday qualifying. Their efforts paid off by the second session, as Lambert recorded a 4.07 in the heat, then stepped up to a 4.025 at 203.49 in the final session.

“We got down in the heat today and went a 4.07, which was quickest in the heat for the class,” Lambert says. “That gives us a little bit of confidence for [Saturday]. We got some data now. That’s what I’ll be doing the rest of the night: looking at data and making changes and getting ready for E1 tomorrow afternoon.” 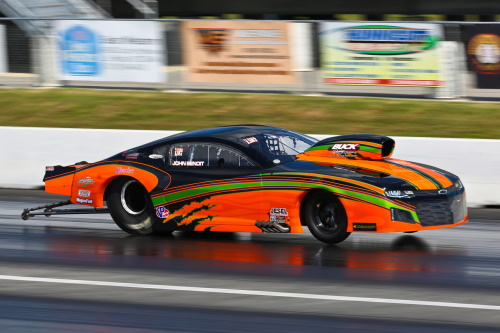 David Lambert’s 4.046 at 189.84 in his nitrous-fed ’63 Corvette sits just outside the 16-car Elite Top Sportsman field, though it gives him the provisional No. 1 spot in the Top Sportsman 32 class. 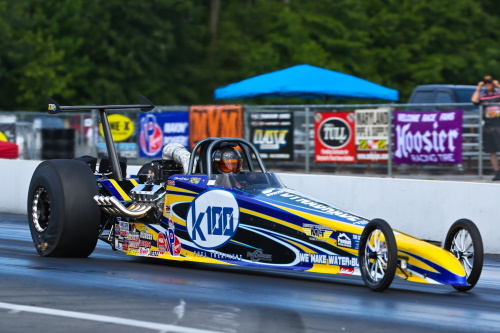 Peter Maduri, fresh off a win at the PDRA American Doorslammer Challenge at Norwalk, took the Bauer family’s ProCharger-boosted K100 ’17 Chrome-Worx dragster to the provisional No. 1 spot in Elite Top Dragster on the strength of a 3.755 at 192.85. Michael White qualified second in his ’15 Maddox dragster with a 3.78 at 192.14, while Kathy Fisher is third with a 3.79 at 188.36 in her Mobile Environmental Solutions/Lucas Oil “Dragoness” ’15 American entry.