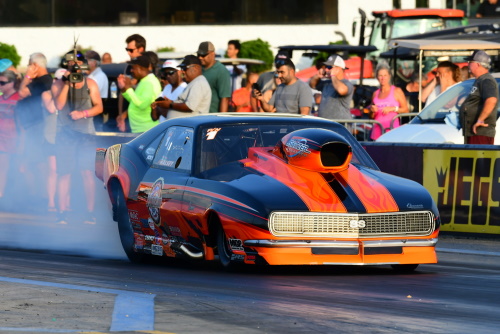 From a 3.73-second pass on a 140-degree-plus racetrack in the opening qualifying session to a 3.668 at 204.94 mph to close out the final session, Jim Halsey and his Brandon Switzer-tuned, Fulton-powered “Daddy Shark” ’68 Camaro were the class of the Pro Nitrous field in qualifying. That’s been the trend all season, and he’s won from the No. 1 spot three times in four races. The two-time and defending world champion is hoping to add a fourth win to that total on Saturday.

“This afternoon’s [3.73] run in the heat with the sun on the racetrack actually surprised me,” Halsey said. “I give all the credit to the tuners, the crew guys, engine builders, everything. We have a good fit right now and everything is maxed up. We saw some pretty tough conditions today and yesterday with the heat and humidity. We should be good tomorrow. As long as I do my job, I think we’ll be fine. I’m a very lucky guy, I can tell you that.”

For the second consecutive race, fellow Maryland native Fredy Scriba qualified No. 2 behind Halsey, firing off a 3.692 at 201.28 in his Musi-powered “Sorcerer” ’69 Camaro. Jay Cox, who won the Kentucky race in May, posted a 3.701 at 204.29 to qualify third in the Buck-powered Butner Construction “Pumpkin” ’69 Camaro. 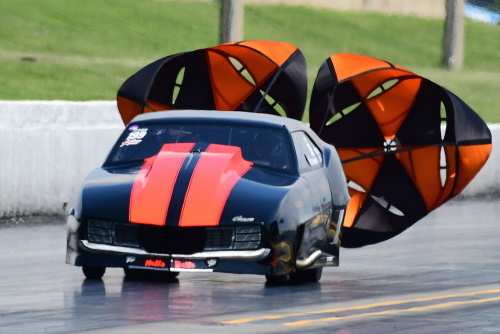 Former Pro Nitrous racer Johnny Camp came out of the first Pro Boost qualifying session as an early favorite in his Brandon Stroud-tuned, ProCharger-boosted “Hells Bells” ’69 Camaro. The Canonsburg, Pennsylvania-based driver continued to run at the front in the next two sessions, ending the night with a 3.651 at 205.13 to lead the 19-car qualifying order.

“We like to be in the top half of the field, but every car here is capable of winning, from 1 to 16,” Camp said, thanking his crew, as well as supporters like Proline, Chris Tatman Electric, NGK Spark Plugs, and Camp Bros. Enterprises. “Everybody will give it our all – all of us. We’ll do our best and see what happens. Proline is really working the runs and working their tuneups. We’re working on the chassis all the time and just picking at it little by little. It adds up.”

Two other ProCharger cars out of the Proline Racing camp followed Camp in qualifying, with two-time world champion Kevin Rivenbark using a 3.69 at 201.31 in his GALOT Motorsports ’69 Camaro to hold off Ken Quartuccio for the No. 2 spot. Quartuccio ran a 3.691 at 209.79 in his “Serial Killer” ’69 Camaro to take the third spot. 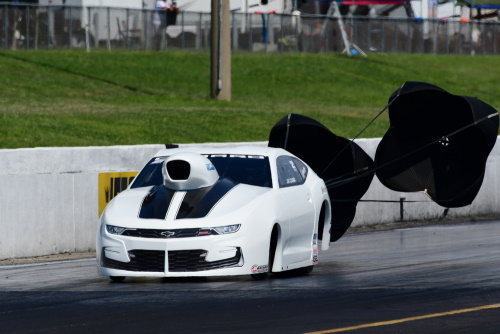 Washington’s JR Carr has had the quickest Extreme Pro Stock car in qualifying at all four prior stops on the 2021 PDRA tour, but he hasn’t been able to turn that performance into a late-round finish yet. He posted a 4.075 at 176.19 in his Frank Gugliotta-tuned ’20 Camaro in the final qualifying session. With a quick, consistent hot rod, Carr realizes the pressure is on him to turn on win lights on Saturday.

“Since day one, that car just goes down a hot racetrack, cold racetrack,” Carr said, mentioning sponsors like CP Carrillo, Maxima Oils, RJ Race Cars, Ram Clutches, and ISC Racer’s Tape. “We have good power. Frank never quits working on it. The crew, like always, never misses anything. It sure is easy qualifying. Racing has been a little tough on me, but that’s 100% on me. I got in my own head thinking I have the best car, I’m supposed to win everything. Well, it doesn’t actually work that way. I feel like I’m letting people down if I don’t. The pressure got to me. I’m usually pretty good under pressure, but it was too much. I’ve been working on it, and we’re having fun, and we’ll make the best of it.”

“We’re all here for Sonny,” Carr said. “We’re definitely thinking about him. He always liked it when we ran good. He was always a gentleman and just a nice guy.”

Points leader Chris Powers, who carries Sonny’s Racing Engines branding on his Chuck Samuel-tuned ’14 Camaro, qualified second behind Carr with a 4.078 at 175.46. Tommy Lee qualified third in Enoch Love’s brand-new Sonny’s-powered ’21 Camaro with a 4.124 at 174.75. 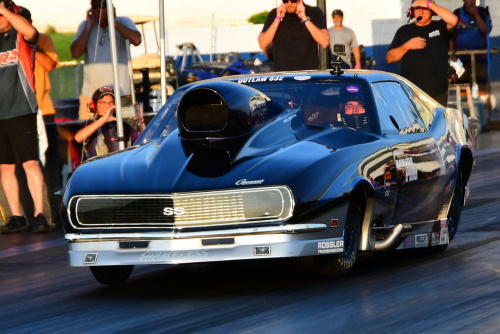 Pro Outlaw 632 points leader Wes Distefano and tuner Troy Russell saved the best run for last, as the defending world champion fired off a 4.167 at 170.23 in the final session to decisively take the No. 1 spot. Distefano, who’s been to all four final rounds this year in his Musi-powered $hameless Racing ’68 Camaro, is motivated to add a third PDRA “660 Man” to his 2021 trophy collection.

“We’re just going to try to race smart and keep everything happy and healthy like it is right now,” Distefano said. “We’re going to try to stay consistent. I’m still going to go out there and try to chop the tree and do my job. Hopefully the car just does what it’s supposed to and the track stays consistent. I think we’ll be OK.”

Two-time world champion Dillon Voss qualified second in his Voss-powered Vigilante Associates ’17 Corvette with a 4.203 at 168.98. Daryl Stewart, who is No. 2 in points behind Distefano, drove his Clayton Murphy-tuned Chassis Engineering ’12 Camaro to a 4.211 at 168.35 to qualify third. 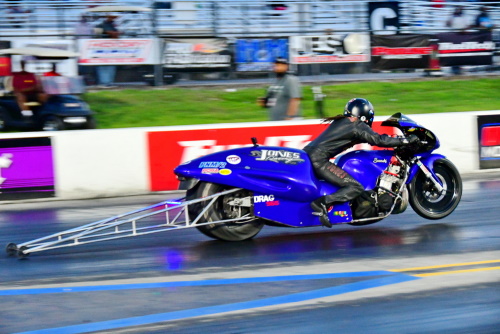 Second-generation Pro Nitrous Motorcycle rider Chris Garner-Jones broke a long winless streak a couple weeks ago at the PDRA North vs. South Shootout, where he also qualified No. 1. After recording a 3.965 at 176.07 aboard his T.T. Jones Racing Hayabusa in the final session, Garner-Jones is set to chase a second consecutive win.

“I feel very confident,” Garner-Jones said. “I don’t want to jinx it, but we know where we’re going, we know what we’re looking for, and I feel like we’ve got a great chance. The bike is running awesome. My brother [tuner William Garner] is doing a fantastic job. I give all the credit to the team.” 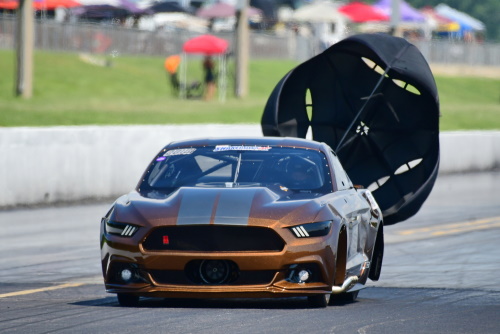 Tim Essick’s home-built “Brown Sugar” ’18 Mustang was one of the most consistent Pro Street entries throughout qualifying, and after posting a 4.024 at 185.74, it was the quickest entry as well. The Maryland native is focused on carrying over that performance – especially the consistency – into eliminations.

“With making good laps every pass today, now we have really good information for tomorrow,” said Essick, who thanked sponsors like ATI Performance and ProCharger. “We’re not trying to swing a home run, we’re just trying to go down every time. The car reacts and performs. Everything we ask it to do, it does. When you have that, it makes it so much easier as a driver because you have confidence in the car. That part’s really nice.” 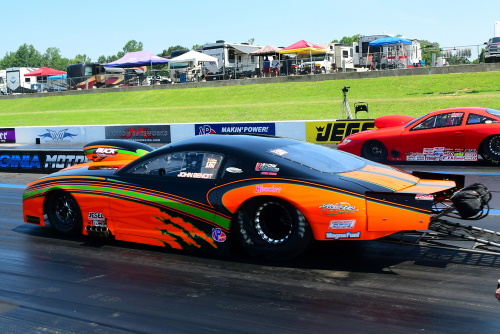 Bob Bauer Jr., who scored an Elite Top Sportsman win in his supercharged ’69 Camaro at the last race, is sitting just outside the 16-car Elite field with one session remaining, but he’s the provisional No. 1 qualifier in Top Sportsman 32 with a 4.056 at 179.25. 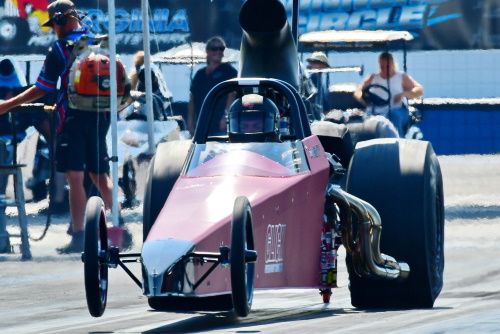