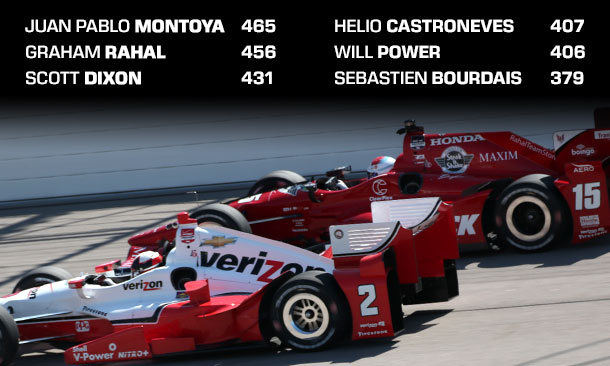 Those are essential numbers to note as the Verizon IndyCar Series charges into the homestretch of the season with the driver and entrant championships on the line.

The ABC Supply 500 on the 2.5-mile Pocono Raceway tri-oval Aug. 23 will be critical for every driver to score maximum points to remain in contention heading into the Aug. 30 finale, in which the championship will be decided for the 10th consecutive year.

A caveat this year is that the GoPro Grand Prix of Sonoma carries double points, plus the regular max of four bonus points. The winner is bolstered by 100 base points, second is worth 80, third place carries 70, etc. Drivers within 104 points of the leader exiting Pocono Raceway remain eligible.

Juan Pablo Montoya of Team Penske has led the driver standings since winning the season opener on the streets of St. Petersburg, Fla., and takes a nine-point advantage over the surging Graham Rahal of Rahal Letterman Lanigan Racing to the “Tricky Triangle” in eastern Pennsylvania. Three-time series champion Scott Dixon of Target Chip Ganassi Racing is another 25 points arrears.

Team Penske’s Simon Pagenaud, who scored a season-best third-place finish at Mid-Ohio Sports Car Course on Aug. 2, is 10th in the standings. Last year, there were six drivers in contention with two races left.

“Our strength at Team Penske is the superspeedways,” Pagenaud said. “Going into Pocono, obviously Montoya won last year. That should be a pretty similar set-up to Indy. We feel pretty confident going into Pocono that our cars should be hopefully in domination mode again so we can have a shot at it.

“At this point all we can do is hope we’re competitive enough to win races so (Montoya) has enough points going into Sonoma.”

Rahal’s victory in the 90-lap race on the 2.258-mile, 13-turn Mid-Ohio road course, coupled with Montoya’s 11th-place showing, sliced the deficit from 42 to nine.

“To be nine points back, I feel pretty good because I do think we can be better than Montoya at Sonoma,” said Rahal, who has occupied the three podium spots twice each this season. “Pocono, he won last year, so we’re going to have to make sure we do a good job. Then again, the last big oval (Auto Club Speedway on June 27) we won.

“Forty-two points, I am not going to lie, really sounded like a lot, so this was a nice surprise to be only nine.”