Reaction times made the difference in the PDRA’s Jr. Dragster classes. Shawn Nardi used a quicker reaction time to win over Nyck Shirkey in the Coolshirt Systems Pro Jr. Dragster final round, with Nardi running 7.95 and Shirkey going 7.921, both on a 7.90 dial-in. In the Classic Graphix Top Jr. Dragster final, Brandon Jenkins went red, allowing Katelyn Page to win with an 8.974 on an 8.94 dial-in. 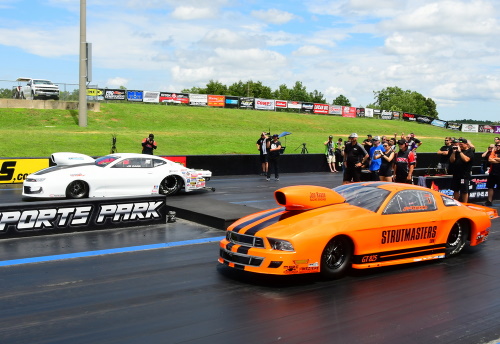 JR Carr qualified No. 1 in Extreme Pro Stock at every race this season, yet round wins have escaped him. Everything finally clicked for Carr and his Frank Gugliotta-tuned ‘20 Camaro at Virginia, as he earned a final-round win over Johnny Pluchino. The two drivers left with nearly identical reaction times, then Carr ran a 4.091 at 175.07 to finish ahead of Pluchino’s 4.102 at 177.04.

The race was also the Sonny Leonard Memorial Race, making the win that much more meaningful for Carr. He also won the largest payout in PDRA Extreme Pro Stock history, taking home $10,000 plus over $5,000 in additional winnings from numerous donors who wanted to increase the payout in honor of Leonard.

“That one’s for Sonny,” Carr said, mentioning supporters like CP Carrillo, Maxima Oils, RJ Race Cars, and Liberty’s Gears. “We’ve got Sonny on board. This is for his family too. I know what they’re going through – I’ve been there. It means a lot. If you race Johnny Pluchino, you better be ready. I don’t care when it is. The kid is good. He’s really good. I just finally started feeling better and getting more aggressive. The crew was flawless like always. They believed in me. They should’ve fired me, but they said they wouldn’t. We’re here now. That was for Sonny, for Frank, for the crew, my wife [Teri], and I’ll take whatever’s left.”

Pluchino, the defending world champion, qualified No. 6 in his Strutmasters ‘13 Mustang. He won first round on a holeshot over Elijah Morton, running a 4.154 to a 4.146. He picked up a major second-round win over points leader Chris Powers with a 4.117, then earned lane choice for the final by .002 with his 4.075 on a semifinal bye run. 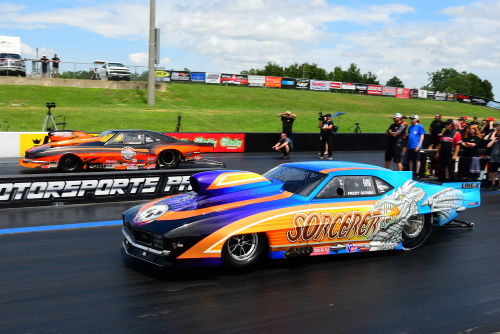 Defending world champion Jim Halsey went into the Summer Shootout with a commanding lead in Pro Nitrous points. He added to that lead with a No. 1 qualifying effort, then marched through eliminations to secure his fourth win in five races. Halsey won on the starting line when final-round opponent Fredy Scriba went red by .012, though Halsey capped the day off with a 3.677 at 206.01 in his Fulton-powered “Daddy Shark” ‘68 Camaro.

“It’s like a dream come true,” Halsey said. “When you surround yourself with the best people in the industry, this is the result. Very proud of my guys and gals. With that 3.67, we were trying to get everything we could get because Fredy’s been pretty badass the last couple races. We needed to be on our game for him.”

Before appearing in his first PDRA Pro Nitrous final round, Scriba drove his Musi-powered “Sorcerer” ‘69 Camaro to a string of passes in the 3.70s. He ran a 3.77 to defeat Matt Deitsch, a 3.727 to beat Tony Wilson, and a 3.714 to knock out Billy Albert. 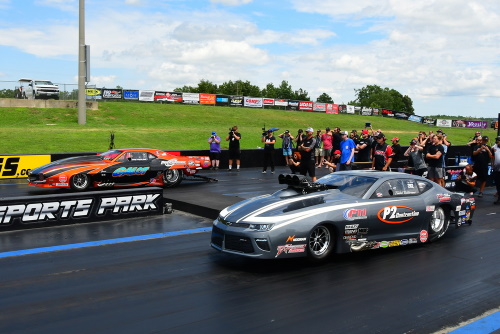 As the Pro Boost points leader going into the weekend, Kevin Rivenbark was racing in defense mode at the Summer Shootout. He was, however, looking for his first win of the season, and he found it after defeating former teammate Todd Tutterow in the final round. Tutterow had the starting line advantage, but he got out of shape and had to lift, while Rivenbark sailed by on a 3.653 at 204.79 in the ProCharger-boosted GALOT Motorsports ‘69 Camaro to take the win.

“It’s a relief,” Rivenbark said of the win, thanking GALOT Motorsports owners Earl and Peggy Wells, Proline Racing, FuelTech, ProCharger, M&M Transmission, Hoosier Tires, and LAT Racing Oils. “You’re never far enough ahead of anybody. Between Tutterow and [Randy] Weatherford, [Johnny] Camp, [Daniel] Pharris, all them behind me, I can have a real bad weekend and any one of them could win and be right back in the hunt. It is a relief. I was four points ahead of Weatherford coming into the race. That’s nothing. That’s qualifying points there. For them to go out early and for me to win, it’s huge. I missed taking advantage of that when they went out at Maryland. That was my own fault. But to capitalize on it this weekend is very good.”

Tutterow, the 2014 Pro Boost world champion, raced through eliminations out of the No. 8 spot in his screw-blown P2 Contracting ‘20 Camaro. He ran a 3.771 over Tommy Gray and a 3.735 over a red-lighting Johnny Camp. In the semifinals, he left the starting line just eight thousandths ahead of teammate Kurt Steding and held the lead to win with a 3.697 over a 3.694 for a .005 margin of victory. 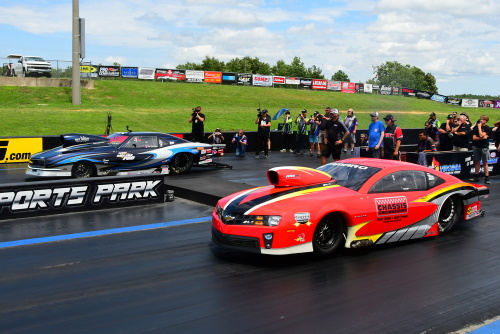 Stewart (near) over Distefano

This season marks Daryl Stewart’s return to racing after a 25-year hiatus, but he’s performing like a practiced veteran. The Norwalk winner picked up his second win in five races, using a holeshot advantage and a 4.224 at 168.83 in his HRE-powered Chassis Engineering ‘12 Camaro to beat Wes Distefano’s 4.21 at 170.30 in the final round.

“It was the best feeling in the world that time,” Stewart said of winning the final round. “I just have to say thanks to Daryl [Hameetman] with HRE Racing Engines and Clayton [Murphy] obviously for everything he’s done. This car’s made a straight pass every time. I can’t say one bad thing. It’s been a great time. Obviously, anytime you can beat Wes in the final like that on a holeshot, that helped out quite a bit. I went .000 on the run before and we thought we burned up all our luck, but we got one last round.”

Distefano earned a first-round bye by qualifying No. 1. He was quickest of the round with a 4.222 in his Musi-powered $hameless Racing ‘68 Camaro before setting low E.T. of the event – a 4.161 – next to a red-lighting George Coleman. The defending world champion posted a 4.187 to beat Chris Holdorf in the semifinals and secure lane choice for the final. 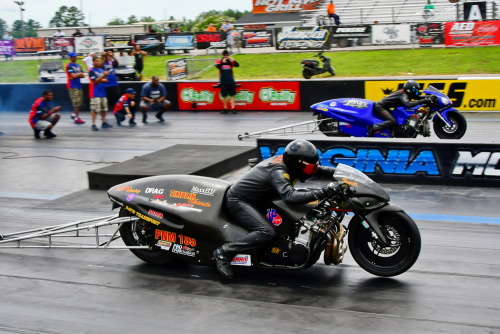 After missing the Ohio race, defending Pro Nitrous Motorcycle world champion Travis Davis needed a strong performance at the Summer Shootout. He delivered a championship-caliber performance in the final round on Sunday, charging to a 3.969 at 178.59 aboard his Timblin Chassis Hayabusa to knock down No. 1 qualifier Chris Garner-Jones and his 4.057 at 168.98.

“I didn’t really expect a .96 out of it like that in the final, but with the help of Dan Wagner with DTM and Steve Nichols with Maxx ECU, the bike is just flawless,” Davis said. “It’s making real good horsepower. This is my spare motor. Now it’s just as good as my main motor that I ran a .95 with. We’re very pleased with it this weekend. My wife [Brandy] and my son [Brayden], they continuously help me. It’s a whole team effort. My dad, he was back at home watching. He’s fighting cancer, so we just ask everyone to keep him in their prayers.” 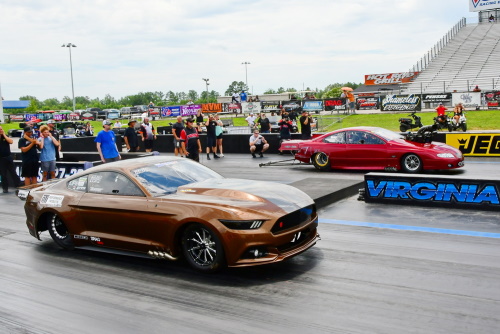 Essick (near) over Schroeder

Pro Street standout Tim Essick was motivated to bounce back at Virginia after suffering a rare first-round loss at the last race. He recovered in a big way, qualifying No. 1 in his ProCharger-boosted “Brown Sugar” ’18 Mustang and racing to the final round. Essick posted a 4.066 at 185.49 to defeat Nick Schroeder’s 4.097 at 186.56.

“After our poor showing at Maryland, to come back and get back on program and make this thing do what it does, it’s a wonderful feeling,” Essick said. “Without the help of ATI, we wouldn’t be able to be here this weekend, so hat’s off to them – Vince and JC definitely. My whole group, everybody knows what to do. We make good calls and every round it just shows, the good people I have behind me. I’m glad to have them in my corner. All my crew – Danny and Michelle and Timmy and some of my others that aren’t here – they give up some of their life to help me do this, and I can’t thank them enough.”

Schroeder, who qualified No. 2 in his screw-blown “Ruby” ’06 GTO, used a 4.242 to knock out points leader Jesse Lambert and his 4.288 in the opening round. He improved to a 4.068 to win his semifinal pairing with Chris Cadotto, who went red. 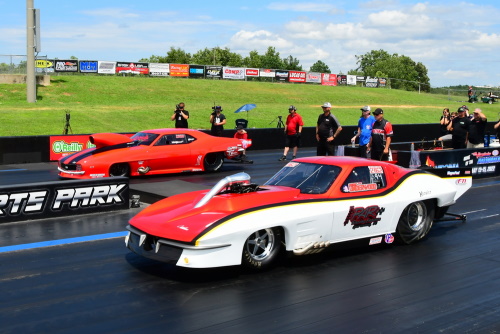 The Elite Top Sportsman final round was set to be a close race, as Donny “Hollywood” Urban and Henry Underwood both entered 3.94 dial-ins. The race was decided on the starting line, though, as Underwood left too soon in his ProCharger-boosted ‘63 Corvette. Urban slowed to a 5.473 to take the win in his nitrous-fed ‘69 Camaro. 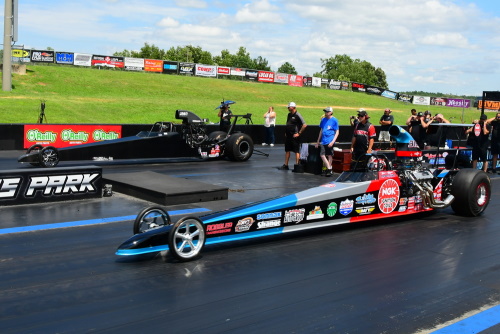 Martino (near) over Hamilton

Past Top Dragster world champion Tom Martino proved that it’s all about consistency once eliminations begin in Elite Top Dragster. In the final round, he ran a 4.109 on a 4.10 in his NGK Spark Plugs ‘13 Mac Sherrill dragster to run dead-on for the third time in eliminations and win the race. Martino defeated Nick Hamilton, who broke out with a 3.859 on his 3.87 dial-in.

The chase for the 2021 PDRA world championships continues in August at the P2 Contracting Northern Nationals presented by P2 Racing, August 12-14, at Maple Grove Raceway near Reading, Pennsylvania. A number of PDRA competitors will also take part in the Summit Racing Equipment PDRA ProStars race during Virginia Motorsports Park’s Night of Fire on July 31.