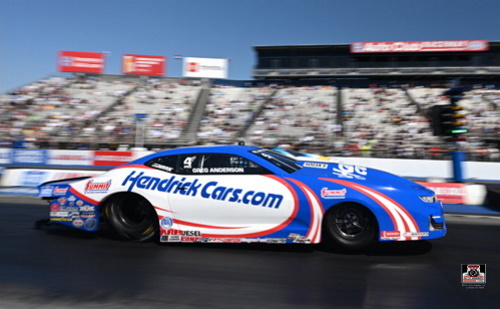 POMONA, Calif. (August 1, 2021) – KB Racing power and speed cannot be denied when it comes to Greg Anderson and the HendrickCars.com Chevrolet Camaro. Anderson has had the dominant hot rod all season in the class, and he drove home the point in Pomona qualifying to claim his eighth No. 1 qualifier award in just the ninth Pro Stock race of 2021. Points leader Anderson enters Sunday at the Lucas Oil NHRA Winternationals scheduled for a first-round bye run to kick off what he intends to be a successful run at the trophy.

“It’s neat to run the low e.t.’s, but unfortunately, that isn’t going to get us the trophy tomorrow,” said Anderson, who is seeking the 97th national event win of his career, which would tie the record for the most ever in the category. “It’s going to be game on, and you’re going to see a lot of crazy stuff happen.”

That “crazy stuff” will likely boil down to a hot racetrack and warmer conditions that competitors did not have the opportunity to prepare for with the late-evening qualifying passes on both Friday and Saturday. Anderson was low of the session in both the first and third qualifier, but in the second session, when it was likely more comparable to what conditions should be on Sunday, he was second-best. 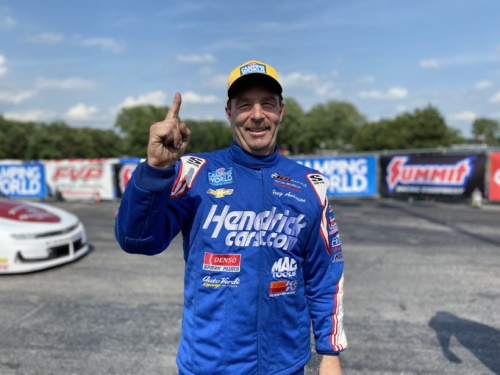 “We didn’t make the run we should have that session, but I think we know what to do,” said Anderson, whose best qualifying time was a 6.586-second pass at 208.42 mph.

“We can make it a lot better for tomorrow, but every run won’t be the same. Things will change every round. We’ll start at 11 o’clock in the morning, and the racetrack will not be bad at all – but it will progressively get worse each run. You’ll have to make major changes with each run, and it’ll be a Heman challenge. We’ve proven before, the bigger the challenge, the more the KB Racing team seems to rise. It’s going to be tough, but I’m looking forward to it.”

Anderson has claimed two wins in four final rounds thus far in the 2021 Camping World Drag Racing Series, and last weekend he reached the semifinals with his ferociously fast HendrickCars.com Chevrolet Camaro. In all, Anderson now has seven No. 1 starts in Pomona (four at the Winternationals and three at the NHRA Finals). He enters raceday with an astounding record of 12 previous Pomona wins, second only to John Force’s 16 victories at the historical Southern California facility.

Although the raceway at Pomona is one of Anderson’s most favored facilities, he knows better than to take anything for granted.

“It will be a little bit unpredictable tomorrow, and you’ll see cars having trouble managing that racetrack,” he said. “We need to be one of the ones that doesn’t have any problem or trip on any cracks. It’s going to be very hard to make quality runs, but that’s what it’s going to take to win this race. It’s going to be the toughest challenge we’ve had all year, but we’re just going to have to find a way to beat the heat.”

Eliminations for the NHRA Winternationals at Auto Club Raceway Pomona are scheduled to begin at 11 a.m. PT on Sunday, August 1, 2021.