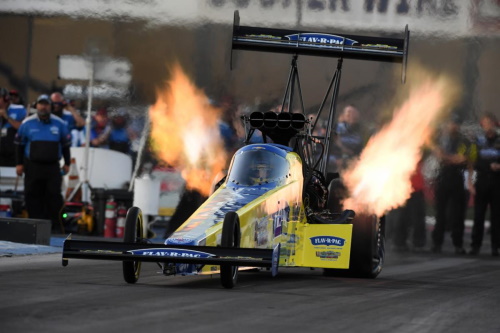 POMONA, Calif. (August 1, 2021) – Brittany Force and the Flav-R-Pac team earned their third consecutive No.1 qualifying position Saturday at the Lucas Oil NHRA Winternationals at Auto Club Raceway at Pomona. Robert Hight and the Automobile Club of Southern California Chevrolet Camaro continued their consistency to end up No. 2 while John Force and the PEAK / BlueDEF PLATINUM Chevy will work from the No. 12 position. 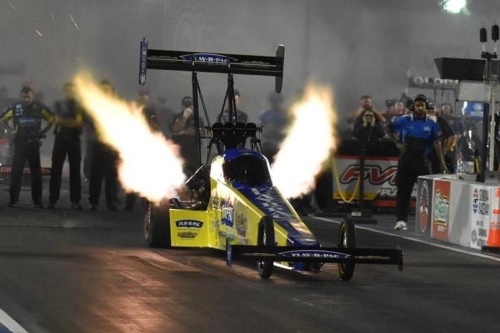 Brittany Force and her David Grubnic and Mac Savage tuned Flav-R-Pac dragster made drastic improvements on their final qualifying try on Saturday. There were problems early for Force’s Flav-R-Pac dragster on their second qualifying attempt Saturday afternoon. The dragster staged but an issue with their automatic shut-off caused them to lose power at the hit. They would crawl to a 19.266-second pass. In the third session, under the lights and in cooler conditions, Force handled her hot rod to a stellar 3.714-second run at 330.72 mph for her fifth No. 1 of the season, 25th of her career, third at Auto Club Raceway and second at the Winternationals.

“This weekend has been tough for us. In Q2 we didn’t even leave the starting line, and in Q1 we didn’t make it down. That last run was the first pass we made it down the racetrack. It was a great run for the Flav-R-Pac / Monster Energy team,” said Force who will have a bye first round. “Race day is going to be tough though, we’re in the best position possible but we’ve only gotten down the track in the cool temperatures and under the best conditions and now we’re going into the heat tomorrow so it’s going to be tricky. But With David Grubnic, Mac Savage and all the Flav-R-Pac guys, I always put my confidence in them. We’re ready for a win, it’s been too long and we’re looking to win this thing.” 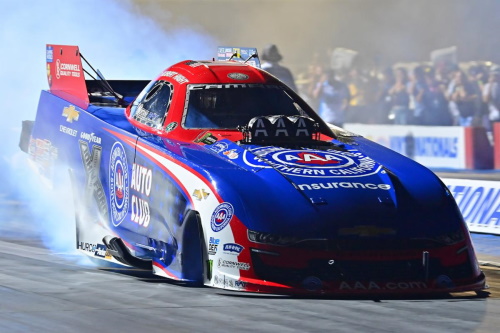 Robert Hight and the Auto Club Camaro ran into trouble mid-track during their first qualifying try on Saturday. They coasted to a 6.419-second pass at 102.56 mph. The Jimmy Prock and Chris Cunningham led team made up for the run in the final qualifying session with a clean and solid 3.953 at 323.27 for the No. 2 position heading into race day.

“I feel good for tomorrow. I’m confident in this Auto Club team, I’m confident in the car Jimmy and Chris have put together and I’m confident in myself,” said Hight who will line up with Terry Haddock to open race day. “I feel that if we were to get into a situation where I had to pedal it, I could win that battle. It’s going to be hot, it’s a tricky track but I’m not worried. I hope to celebrate in the winners circle with Auto Club at our home race and their first race back with a display in the midway.” 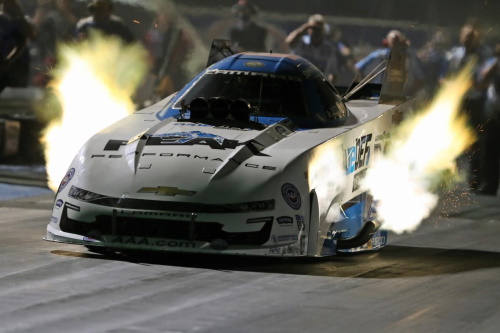 In his first run on Saturday, John Force once again had to pedal the PEAK / BlueDEF Chevy. Force was able to better his Friday time with a 4.287-second pass at 287.90 mph. The Saturday evening run posed more problems for the 16-time world champion. The PEAK / BlueDEF Camaro had to shut off early to a 7.476. Force would end up No. 12 off his Saturday afternoon run. He’ll face Matt Hagan first round.

“Not many made it down there. I pedaled it down, I think that’s a lot of what might happen tomorrow in the heat,” Force said. “These guys, my PEAK / BlueDEF team, they’re working hard. Not an easy weekend. Pomona in the summer, it’s brutal but I’ve won it before, the only other time it was here 20 years ago. Hopefully that counts for something.”

Eliminations at the Lucas Oil NHRA Winternationals are slated to begin at a new time, 10 a.m., on Sunday, August 1. To catch final qualifying action on television, tune into FOX Sports 1 on Sunday at 10 a.m. ET. Eliminations will air on FOX Broadcast Network on Sunday at 4 p.m. ET.