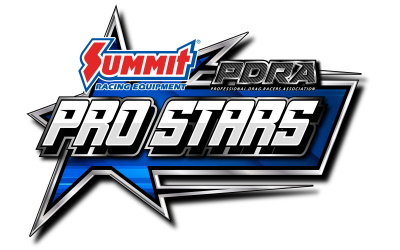 The PDRA’s rising stars in the Jr. Dragster classes also participated in the ProStars event. Ashley Franklin, daughter of two-time Pro Nitrous world champion Tommy Franklin, scored her first win in Coolshirt Systems Pro Jr. Dragster. In a double-breakout final round, Franklin drove her new Halfscale dragster to a 7.885 to beat Will Creasman’s 7.872. Rowan Parlett secured the $2,000 event win in Classic Graphix Top Jr. Dragster, using a holeshot advantage and a 9.036 on an 8.95 dial-in to defeat Donald O’Meara II and his 8.958 on an 8.92 dial-in.

Eric Jasper won the Super 64 Shootout, defeating Bruce Sisk in the final round. 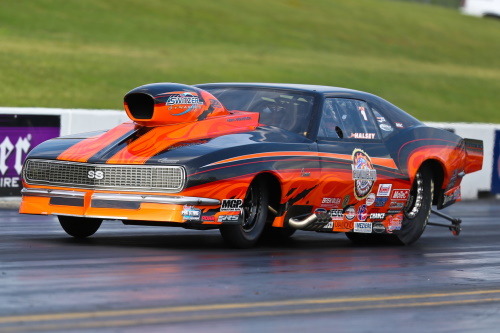 All but one pairing in the first two rounds of the $20,000-to-win Pro Nitrous vs. Pro Boost race featured bottles vs. boost matchups, but Jim Halsey’s “Daddy Shark” ’68 Camaro was the last nitrous car standing after the second round of eliminations in the 16-car shootout. With a brand-new Fulton 959ci engine between the framerails, Halsey kept the momentum rolling into the final round. He delivered his fourth consecutive PDRA victory, as Johnny Camp went red next to Halsey’s 3.657 at 207.02. Camp ran a 3.67 at 206.07.

“Considering the circumstances, this is pretty cool,” Halsey said. “The test run this morning was the very first run on the new motor. To run a .65 five runs later, it’s kind of unbelievable to me. But with Brandon [Switzer] and Eric [Davis] and Michael [McMillan] and Cathy [Crouse] involved, nothing surprises me.”

“It was pretty nerve-racking, really,” Halsey said of racing all boosted entries. “Rivenbark is fast and he’s good on the tree. Camp, he’s the baddest guy in Pro Boost right now. It was pretty exciting.” 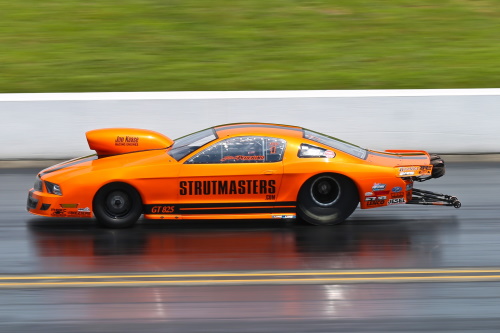 With runner-up finishes at the last two races, Johnny Pluchino was more than ready to bag the $10,000 Extreme Pro Stock win in his Kaase-powered Strutmasters ’13 Mustang. The second-generation world champion pulled it off with a 4.104 – which stood for low E.T. of eliminations – to defeat 2018 world champion Steven Boone and his 4.248 at 169.68 in the final round.

“It’s cool to win the first ProStars race,” Pluchino said. “There will only be one first. I’m just happy about the momentum we’re starting to grab right now. We’ve had a good car, not a great car. I feel like I’ve been driving pretty good. I really want to defend this championship. I want to win every race I come to. If I’m coming to the racetrack, we’re coming to win. Just real proud of our group right now. Thanks to all of our partners like Strutmasters, Jon Kaase Racing Engines and Ram Clutches for sticking with us.” 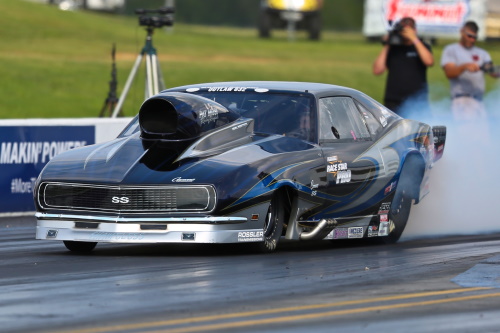 After losing on a holeshot in the PDRA Summer Shootout final round at VMP a couple weeks ago, Wes Distefano was eager to redeem himself at the ProStars race. He accomplished that goal, setting low E.T. of the first two rounds before defeating two-time world champion Dillon Voss in the final round. Voss went .001 red and ran a 4.198 at 170.43, while Distefano recorded a 4.227 at 168.83 in his Musi-powered $hameless Racing ’68 Camaro.

“It was a great event,” said Distefano, who won $7,500. “It was nice to have a little bit of a different format, not knowing who you were going to run. It just added another layer of excitement to the event. We struggled today. We didn’t win in the fashion we’d like to. Dillon outran us and was .001 red. You can’t get too much closer to being beat than that. It was a good win, but we’re fighting some problems.”

Distefano won the opening round of eliminations over Chris Holdorf when Holdorf went red by .008. Distefano ran a 4.201 at 170.99 to earn lane choice over Brian Clauss in the semifinals. Clauss grabbed a holeshot advantage and posted a 4.28, but it wasn’t enough to stay out in front of Distefano’s 4.223 at 168.26.

ELITE TOP SPORTSMAN VS. ELITE TOP DRAGSTER
The Elite Top Sportsman vs. Elite Top Dragster paired up door cars against dragsters, but only dragsters remained after the second round. Past world champion Kellan Farmer and Larry Roberts won their semifinal pairings to meet up in an all-RaceTech dragster final round. Farmer went red with a -.017 light and ran it out to a 3.907 on a 3.91 dial. Meanwhile, Roberts posted a 3.873 on a 3.87 dial-in to collect the $7,500 victory.

TOP SPORTSMAN VS. TOP DRAGSTER
The 16-car Top Sportsman vs. Top Dragster race ended with two Top Sportsman standouts in the final round, though one of them was in a dragster. Defending Top Sportsman world champion Stacy Hall took his Top Dragster entry to the final round to meet up with Ronnie Proctor in his nitrous-fed ’09 Mustang. Hall and Proctor left with nearly identical reaction times, but it was Hall’s 4.371 on a 4.37 dial-in that gave him the win. Proctor posted a 4.291 on a 4.28 dial-in in the runner-up effort.

The PDRA will return to its regular schedule August 15-17 for the P2 Contracting Northern Nationals presented by P2 Racing at Maple Grove Raceway near Reading, Pennsylvania.