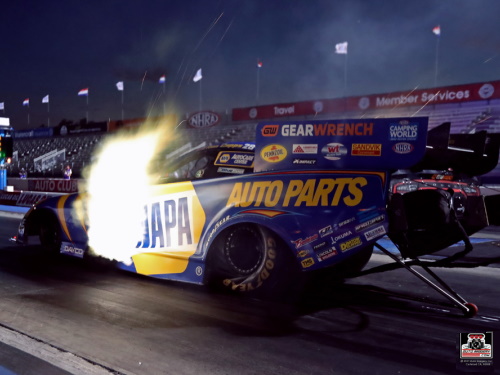 POMONA, Calif. (August 1, 2021) – For the second week in a row and fourth time this season, NAPA AUTO PARTS Dodge Charger SRT Hellcat Funny Car pilot Ron Capps will start race day from the No. 1 seed. Capps earned the pole during the third and final round of qualifying for the NHRA Winternationals by powering his 11,000-horsepower machine to a stout 3.941-second pass under the Auto Club Raceway at Pomona lights to earn his 29th No. 1 qualifier award.

Capps, who owns the class-best qualifying average, has been racking up yellow No. 1 qualifier hats left and right as of late, and has advanced to the semifinals or beyond four times in the last five events. While they’ve come close, finishing as the runner-up at Houston, Team NAPA is still chasing their first 2021 triumph. The Carlsbad, Calif. resident, who refers to the Dean Antonelli/John Medlen-led NAPA team as ‘a win waiting to happen,’ knows the hot and tricky track conditions that plagued teams during Q2 – the only qualifying session contested during the heat of the day – will once again provide its own unique set of challenges on race day.

“Tomorrow is going to be new territory for a lot of crew chiefs and drivers,” said Capps referring to the uber-hot weather conditions that teams will have to battle through on Sunday. “We only got one run in the heat this weekend, and no one made it down. It’s such a different track being here in July versus February or November, and it’s kind of fun. That 10 a.m. round-one session could have the best conditions we’ll see all weekend. The track has just been so difficult to get down, so you’ve really got to be on your game, especially with a car like ours that makes a lot of power. You really have to make sure you race the race track and that’s why I’m so glad I’m with the team I’m with, because they’re able to do that.

“There’s going to be a lot of upsets,” added the 27-year nitro veteran whose pedaling expertise is likely to come in handy on Sunday. “There’s a lot of good teams qualified at the bottom of the field so it’ll be a really exciting show for the fans tomorrow, but stressful for the drivers and crew chiefs.”

Capps will open eliminations with a round-one matchup versus No. 16 qualifier Bobby Bode. He is a three-time NHRA Winternationals champion, but says a trophy at this year’s rescheduled event would be extra special given the unique circumstances of running the historic race in the summer.

“It’s really felt like a ‘throwback’ race all weekend. It would be fitting to get our first win together here with this team. I love the history of this track, and this race, and whoever wins tomorrow should really be extra proud. These are the trophies you really, really want.”

The Competition: No. 16 Bobby Bode 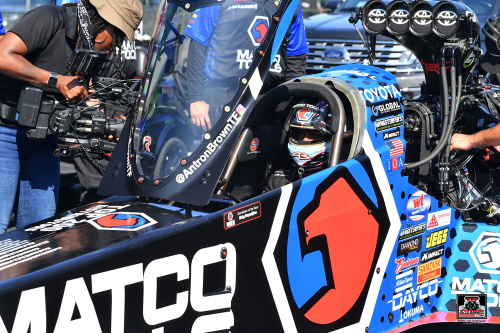 The Competition: No. 4 Steve Torrence

Quotable:
“Pomona sure hasn’t been good to us during qualifying. We’ve been fighting some issues here and we need to find out what it is. We have some electrical problems to work through. We brought our backup car out of the trailer for this weekend and it’s been fighting us. We had something just shut off when we were backing up on the burnout for the Q3 lap. We were really looking forward to that run to try and step up and get a much better qualifying position. Those things happen and it’s best it didn’t happen on race day. I trust these Matco boys. We’ll be here tonight working hard and late and we’ll get this thing ready for race day and go up against Steve Torrence. That’s a super tough first round, but we’ll go after it.” 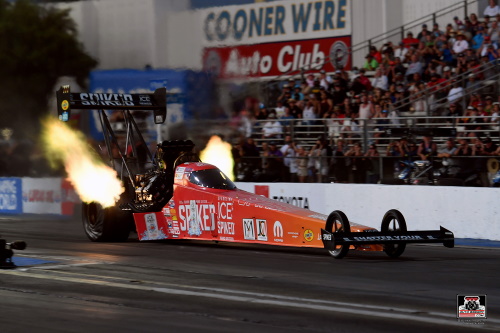 The Competition: No. 13 Steve Chrisman

Quotable:
“We wrapped qualifying of the Winternationals and we’d like to call it the Summernationals with the high temperatures outside and on the race track. We haven’t run here in 18 months and we were very impressed that we were able to put together three strong runs and carry the provisional No. 1 spot until the end and ending up at No. 2. Our goal is to continue to run the way we did during race day at Sonoma last weekend; very competitive and consistent. We have a very consistent car right now and the team is on point. I feel like I’m on point. This is a hometown track for me having grown up not far away in Redlands (Calif.) and the fans don’t let you forget that. It’s very uplifting. We want to get our first win of the season here in SoCal in front of these great fans and our crew definitely earned their Sparkling Ice Spiked today.” 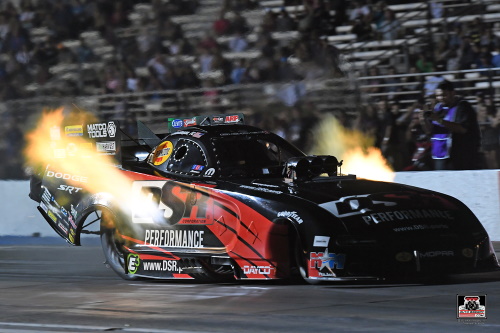 The Competition: No. 12 John Force

Quotable:
“Pomona has turned out to be a tricky race track for everyone out here right now. Coming into tomorrow, and this entire weekend, it’s been very hot and we have data from February and November when it’s normally much cooler here. We’re just trying to figure out this race track and what it wants and will hold. If anyone can figure it out, Dickie Venables can. I have so much confidence in Dickie and this team on race day. It could turn into a driver’s race and we may have to pedal these things a few times and do whatever it takes to get to the finish line and turn the win light on. I know Dickie has confidence in me and I feel we can get this DSR Performance Dodge into the winner’s circle tomorrow. We need to have a bit of luck, make some good tuning calls and I need to be on my game and drive this race car. We’ll get some rest and get after it.”

ABOUT DON SCHUMACHER RACING
Established in 1998 as a single-car Top Fuel team, Don Schumacher Racing (DSR) has grown to become the winningest organization in NHRA Drag Racing history, and further cemented its position as one of motorsports’ elite teams when it surpassed the ‘350 wins’ milestone during the 2020 season. DSR owns 18 world championships in three different NHRA categories, and including hall-of-fame team owner Don Schumacher’s five NHRA Funny Car triumphs from the 1970s, DSR has been successful in capturing 360 national event victories overall.