POMONA, CA (August 3, 2021) – Running the NHRA Winternationals in July proved to be a tough task for Funny Car driver Tim Wilkerson and the rest of the NHRA Camping World Drag Racing Series competitors. After two days of qualifying, race day began with teams getting their first runs on a track that started out twenty degrees cooler than anything they had seen at the event. The Levi, Ray & Shoup Summit Racing Ford Funny Car team was dealt another setback when a number of Top Fuel dragsters and nitro Funny Cars suffered motor failures that led to lengthy oildown delays. By the time Wilkerson was strapped into his cockpit, the majority of the tuning decisions were made and the track temperatures continued to rise. 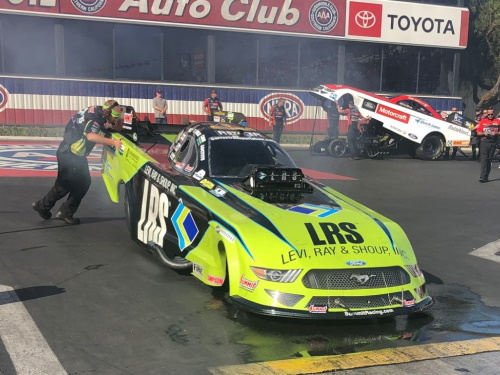 Coming into the Winternationals Wilkerson had only one first round loss in traditional side by side competition this season. The wildly inconsistent track conditions forced the crew chief and driver to get creative with his tune-up adjusting the clutch package every run of qualifying trying to find a stable combination for the Auto Club Raceway at Pomona racing surface. In the final session of qualifying Wilkerson made a representative run and went into race day as the No. 13 qualifier and a first round race against two-time world champion Cruz Pedregon.

Earlier this season Pedregon ended Wilkerson’s day early at the Norwalk Nationals. Today after the delays Wilkerson knew before he hit the throttle he would need some help from his competitor if he was going to advance to the quarterfinals. The veteran driver and crew chief felt like he made adequate adjustments to his clutch package and tune-up but with every passing minute and increase in temperature he knew his chances of success were dwindling.

Both Funny Cars took off and as Wilkerson and the Levi, Ray & Shoup Summit Racing Mustang advanced across the shake zone his Goodyear tires lost traction and he was forced to lift as there was no hope of regaining momentum on the run. Wilkerson crossed the finish line second with a time of 5.224 seconds which was quicker than the comparable run in the second qualifying session but it was not enough to stay in the win column.

“The delays definitely hurt us today,” said Wilkerson, a 20-time Funny Car national event winner. “This event was a challenge with the heat and the green race track. Everyone had to deal with the same issues and we just got bit in that first round. I thought I had taken enough clutch out of it but after the run I could see how fast it still was because the tires were spinning too fast on the hot track. You can only try your best and we gave it our best. I can’t thank all my guys enough for working late last night and then getting out here early this morning. We will look at everything and be ready for Topeka.”

Wilkerson will be back in action for the NHRA Topeka Nationals in two weeks. He is currently eighth in points with three races in the NHRA regular season.