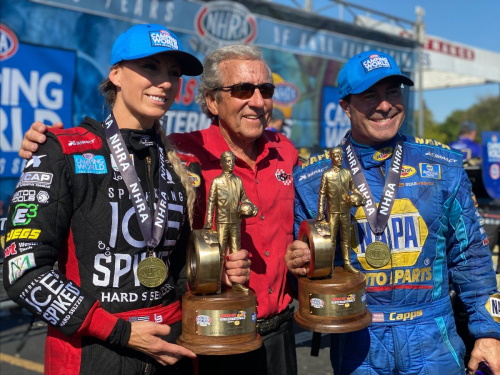 POMONA, Calif. (August 3, 2021) – Drag racing’s winningest organization ‘doubled-up,’ sweeping the Top Fuel and Funny Car categories for the 68th time during the rescheduled NHRA Winternationals on Sunday when SoCal racers Leah Pruett and Ron Capps broke through to drive their 11,000-horsepower machines to victory for the first time in 2021.

Aboard the Sparkling Ice Spiked Top Fuel dragster, Pruett clocked a 4.021-second at 247.61 mph run in the final round to earn her ninth Top Fuel victory, while Capps posted a 4.151-second at 297.75 mph pass behind the wheel of the NAPA AUTO PARTS Dodge Charger SRT Hellcat to earn his 66th Funny Car trophy, and 67th overall.

One week after advancing to the final round in Sonoma, Pruett followed up her strong NorCal performance by securing the second seed at the venue where she first got her NHRA start while competing in Jr. Dragsters 25 years prior. The Redlands, Calif. native opened eliminations with a round-one triumph over Steve Chrisman to earn the coveted quarterfinal Bye run. Against Mike Salinas in the semis, Pruett took the Sparkling Ice Spiked machine on a winning 3.927-second ride to secure a bid to the finals for the 18th time in her career.

Pruett was lined up and ready for battle against No. 7 qualifier Justin Ashley in the final showdown when her opponent chose to err on the side of caution after experiencing symptoms of heat exhaustion, and opt-out of the run. That provided Pruett with her second solo opportunity of the day, and an uncontested win to officially earn her second Pomona Wally trophy (2017).

“First and foremost, I hope Justin (Ashley) is doing well. He is an incredible competitor and I wanted nothing but to race against him,” said Pruett of her final round Bye.

“This win is about the perseverance of this Sparkling Ice Spiked team, our dedication to do this on a home track is phenomenal,” added Pruett, who moved into fourth in the Top Fuel rankings after a frustrating dry spell that found her winless since Brainerd 2019. “Thank you so much to everybody that stuck with us. I mean, we dug deep. It’s been a long time since I’ve seen a Wally (trophy). The most impressive part for me today was how our team has continued to persist and persevere and grow into the success region that we have right now.

“For (crew chief) Todd Okuhara to have an aggressive tuning persona and an application while being in the mud, and (assistant crew chief) Neal Strausbaugh, having leadership ability and bringing us all together. It’s about the fundamentals of what’s happening in the trailer and having each other’s back and pulling the rope in the same direction. We had been doing that, but we really got in sync together and that’s what makes me the most proud. This win is because of the progression over the last couple of weeks and what it has taken. The Sparkling Ice Spiked team definitely deserves every bit of this one no matter how it came. I’m very proud of them.”

Prior to Sunday, Capps had come close to tasting victory with his new Dean Antonelli/John Medlen-guided NAPA team, including a runner-up finish in Houston and consecutive semifinal appearances at the three most recent events. He had spent the past several weeks describing his team as ‘a win waiting to happen,’ and after battling through the 18-entry Pomona Funny Car field to nab the pole for the second week in a row, he drove his No. 1 qualified NAPA Dodge past Bobby Bode, Bob Tasca III, and John Force to meet fellow former world champion J.R. Todd in the final round. Against Todd, Capps set off the win light with a 4.151 E.T. to defeat his opponent’s 4.289-second effort in a nail-biter of a race that forced both drivers to maneuver through dropped cylinders. Capps’ triumph marked his fourth Winternationals victory, and propelled him into the Funny Car point lead.

“I was thinking this week I should stop saying ‘a win’s coming,’ because I felt like maybe I was jinxing it but I truly felt like our team was like Pac-Man,” said Capps who jumped four spots up to first in the Funny Car standings. “You know, we were just chomping through these Camping World series points – semifinal after semifinal, a final in Houston. We’ve been consistent, and I really think we can have the regular-season point lead going into the Countdown, we just need to keep doing what we’re doing.”

Sunday’s win was not only significant for the lifelong Calif. resident because it was achieved in front of friends and family at his home track, but it was also the first time he won with his new team, and in what may likely be one of the most challenging settings NHRA teams will experience all year.

“Today was probably some of the most extreme conditions I’ve driven a Funny Car in, and maybe even the most fun car to drive,” added Capps of the hot weather that confronted teams on race day. “Everyone’s been tearing their hair out trying to get down the track and we had things happen, and cylinders going out and Guido and Medlen were just leaving it be because my NAPA Dodge was running like a bracket car. They’ve got such a nice tune-up that you can put a cylinder out and get through that rough spot and still make it down the track. We were quietly going about it every run.

“I’ve been longtime friends with Guido but we had never worked together. I had already worked with John Medlen, I knew how he operates, and he’s light years ahead of a lot of people with these great ideas. It’s great to have them both in our lounge.” 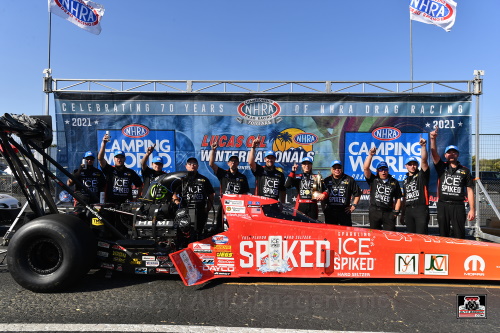 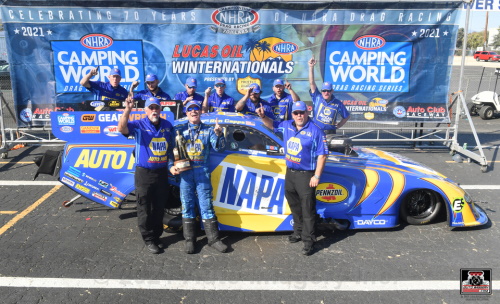 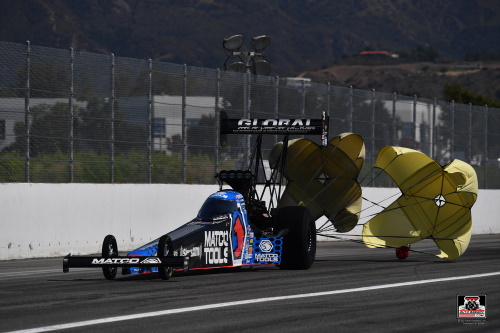 Race Recap:
Antron Brown overcame an 11th seeded starting position and tough first-round match-up on Sunday at the NHRA Winternationals to advance to the semifinals for the third time in four events. The three-time world champion drew point leader and defending world champion Steve Torrence in round one of eliminations, a stout match-up more resembling of a final-round showdown than an E1 battle. In their 50th meeting, Brown was first out of the gate and drove the Matco Tools/Toyota/Global Electronic Technology/Hangsterfer’s/SiriusXM machine straight down the groove in 3.834 seconds for the win, effectively putting an end to his friend’s attempt to ‘sweep the Swing’ for the first time in his career.

Against Shawn Langdon in the quarterfinals, Brown once again secured the starting line advantage. Both he and his opponent were plagued with dropped cylinders but Langdon’s occurred right at the hit while Brown’s machine started putting holes out further down track and he was able to hang on for the win.

In Brown’s seventh semifinal round appearance this year, he lined up opposite Justin Ashley who grabbed the early lead and never trailed for the win when Brown’s machine started hazing the tires and dropping cylinders. Brown closes out the Western Swing holding strong in the No. 2 position in the Camping World Series point standings, a ranking he’s maintained since winning Atlanta earlier in the season.

Quotable:
“All-and-all, we rebounded well on race day like I knew our Matco Tools team can. I have all the confidence in these guys. That was a big monster match-up first round with Steve-O (Torrence). We tried to slow her down second round against Shawn Langdon, but it still dropped a hole out there. That track was just evil out there. It was tough, but we were able to move on to the semis. That was a tough race against a good-running car. Justin Ashley is great on the tree and our car was about to throw down. It was trucking early until it dropped a hole and slowed us down. Hats off to Justin and (crew chief) Mike Green over there. They’ve run great all weekend in tough conditions here at Pomona. We kept going rounds and that’s important. We really want to hold down this No. 2 spot into the Countdown. We just have to keep progressing and getting better. We have the Night Under Fire at Norwalk coming up, Bill Bader’s track in Ohio. We’re looking forward to having some fun with the fans and getting some test laps in. We just want to keep growing and progressing into the playoffs.” 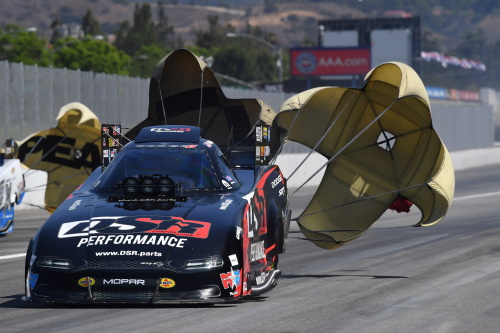 Race Recap:
After racing to victory at the Dodge//SRT Mile-High Nationals in Denver, and a runner-up finish in Sonoma, Matt Hagan was looking to bookend the Western Swing with Wally trophies by capturing the win at the rescheduled NHRA Winternationals on Sunday.

Hagan qualified the DSR Performance Dodge Charger SRT Hellcat Redeye fifth to draw fellow Funny Car heavyweight John Force in the first round. Hagan moved first, giving himself a sizeable lead, but Force steadily reeled him in and was able to edge past the reigning world champ just ahead of the finish line, ending Hagan’s day after the first round.

Quotable:
“It’s been a tricky track all weekend here at Pomona with these hot temps and Dickie (Venables) got the car to go down a very tough race track to give us a fighting chance. It just didn’t run good enough. We learned a lot racing in this heat and in conditions of which we had very little data. Now we do have some data if we face hot conditions like this in the future. We’re ready for a little break next weekend before we start again in a few weeks at Topeka (Kan.) and Brainerd (Minn.). It’ll be hot in Kansas and maybe some of what we learned here will help us there. We have a lot of racing left; this is the halfway point of the schedule. We’re going to dig in deep, work hard and win a few more of these races.”

ABOUT DON SCHUMACHER RACING
Established in 1998 as a single-car Top Fuel team, Don Schumacher Racing (DSR) has grown to become the winningest organization in NHRA Drag Racing history, and further cemented its position as one of motorsports’ elite teams when it surpassed the ‘350 wins’ milestone during the 2020 season. DSR owns 18 world championships in three different NHRA categories, and including hall-of-fame team owner Don Schumacher’s five NHRA Funny Car triumphs from the 1970s, DSR has been successful in capturing 360 national event victories overall.