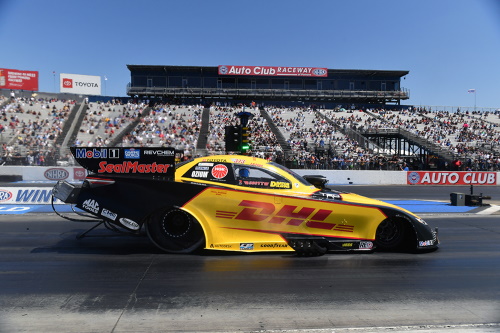 J.R. Todd was chasing history today at the NHRA Winternationals as he raced to his 19th Funny Car final round in pursuit of his first Funny Car title at the historic event. Todd had two Top Fuel victories at the traditional season-opening race which was rescheduled to July this season. Todd was looking to add his name to a list of Top Fuel and Funny Car Winternationals winners that included Don Prudhomme, Kenny Bernstein and Gary Scelzi. Todd came up just inches short as he grabbed Funny Car runner-up honors to Ron Capps today at Auto Club Raceway at Pomona.

In an epic final Todd got a starting line advantage but was unable to hold off the No. 1 qualifier for the win. The team was battling an issue with dropped cylinders all day but they were able to dispatch three opponents to reach the final.

“We didn’t run spectacular, but we ran good enough to get to the final,” said Todd. “We had a problem dropping cylinders today and that’s what cost us in the final. I’m just glad to get there. The Western Swing was a struggle until we got to Pomona and then the track was real tricky this weekend. So hats off to Todd Smith, Jon Oberhofer and all of the DHL Toyota guys who made it happen today. I just wish we could have gotten a win to finish off the Swing, but all in all, it was a good points day.”

His first round match-up with Jeff Diehl was a great opportunity for Todd and the DHL Toyota Camry Funny Car team to get a handle on the race track and build some momentum for race day. The 2018 Funny Car champion grabbed a starting line advantage and led the entire race to advance to the quarterfinals for the second race in a row. Todd’s 4.148 second pass was one of the quickest runs of the session. The first round of Funny Car saw a track temperature increase of over 15 degrees from the beginning of Top Fuel eliminations. The dramatic increase had all the crew chiefs updating their tune-ups throughout the session. Smith and the DHL crew made the right adjustments and picked up the round win and secured lane choice in the quarterfinals.

The quarterfinals saw Todd taking on the most recent event winner Robert Hight. Earlier this season Todd defeated Hight in the Gatornationals final that featured both drivers pedaling their hot rods with Todd getting to the stripe first for the season opening win. Today, it was again Todd coming out on top. He got a starting line advantage and held off Hight for his second win light of the day in a race that featured identical 4.192 second elapsed times. Todd’s starting line advantage proved to be the difference for the win.

“Running Robert, they are the class of the field,” said Todd. “They are coming off a win last week, and that was a big round win for us. We are trying to move up in points. For DHL, Mobil 1, Toyota, and all our sponsors we are going to keep getting after it.”

In the semifinals Todd and the DHL Camry Funny Car drew No. 14 qualifier Jim Campbell who is tuned by legendary crew chief Jim Dunn. It was another tough round but again Todd and his race car were up to the task. After another round win Todd explained how tricky the track was throughout the day.

“You can hear these cars on that visor cam and thanks to Rev Chem for making that possible today,” said Todd from the top end. “This DHL Toyota Camry gets down track and goes over those bumps and it starts revving up at that point I am just hanging on. Round one it dropped a hole and you can’t lift. These track conditions we haven’t seen since I don’t know when. The crew chiefs don’t really have notes for it so as a driver you have to get low and leg it out and hope that the guy next to you doesn’t go driving by.”

At the end of the day Todd moved up in the Funny Car point standing on the strength of his runner-up finish. He is just 57 points out of the Funny Car No. 1 spot with three races left in the regular season including the U.S. Nationals which will offer drivers points and a half.

“We did ourselves some good today, so it definitely shows that we’re back in the hunt,” said Todd. “We just need to stay consistent in starts and qualifying, then go to the later rounds on race day. That’s where we’ve been lacking and today we made that up.” 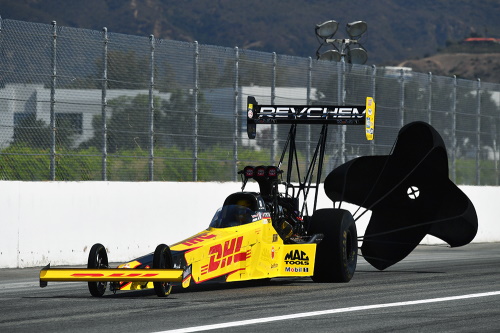 Shawn Langdon and the DHL Kalitta Air Top Fuel dragster team were the second pair of race cars to hit the track to start the Winternationals. They had to wait once eliminations began as the NHRA Safety Safari cleaned up the track following an oildown in the opening pair. With every passing moment the track temperature continued to rise and had the crew chiefs conferring on tune-up adjustments. When Langdon hit the throttle on his dragster he got the jump on Jim Maroney and never trailed in the drag race. The 2013 Top Fuel champion raced to his first win light of the day with a solid 3.923 second pass.

In the quarterfinals Langdon and the DHL team pulled up beside three-time world champion Antron Brown. In qualifying Langdon had a sizeable performance advantage but race day conditions had leveled the playing field. Both cars launched side-by-side and were racing to the finish line. As they crossed half-track Langdon could feel his race car laboring. The veteran driver stayed on the throttle as long as possible to give himself the best chance for victory but just before the finish line he knew he needed to make a tough decision. Brown who was also on a run with issues narrowly took the win at the finish line.

“It is tough obviously. On that run I felt like we left together,” said Langdon from the top end. “I saw his nose pop out and I was just watching him out there. On days like today anything can happen. I felt the car nose over pretty bad and I stayed with it as long as I could. I lifted and at that time it looked like he shut it off too. I wasn’t sure what was going on. I smelled my fire and I knew I was toast. We have been trying to run good. Connie and Kurt have been working to turn it around.”

With three regular season races left before the Countdown Langdon and the DHL Kalitta Ait Top Fuel team are solidly in the top ten sitting in fifth place. 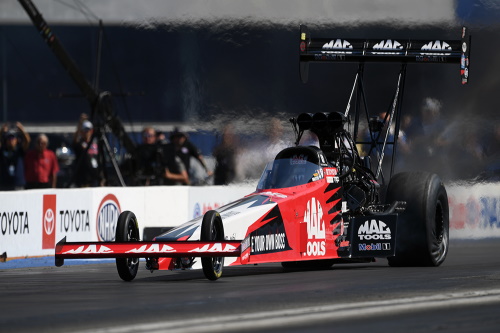 Doug Kalitta and the Mac Tools Top Fuel team had raced to five consecutive final rounds and had won the previous three Winternationals. The team was looking to extend that record-setting streak today at Auto Club Raceway at Pomona. Two days of qualifying gave the team some information coming into race day but with two night-time sessions all the teams we forced to look into their run books for information that would translate to solid performance numbers.

In the second qualifying run the Mac Tools race car made a nice clean run of 4.04 seconds in the heat of the day. In the third and final session Kalitta stepped up with 3.855 second run to move up to No. 6 qualified position and set up a race with veteran Clay Millican in the first round.

Kalitta and Millican were the first pair of Top Fuel dragsters on the track trying to take advantage of the coolest track temperatures of the day. Both race cars took off together and were side by side as they approached half-track. Kalitta’s dragster started hazing the tires but the 49-time Top Fuel national event winner gave his throttle a quick pedal to give his race car the chance to continue accelerating. He was able to get it to hook back up and while Millican was mixing up cylinders in his lane Kalitta was unable to catch-up for the win.

“Getting beat at your favorite place is tough,” said Kalitta, who has two runner-up finishes in 2021. “We are coming on it just didn’t happen today. I really am proud of the effort we have going on with this Mac Tools Toyota dragster. We are going to keep working together. The guys are plenty smart with this race car so we will just pull together as a team.”