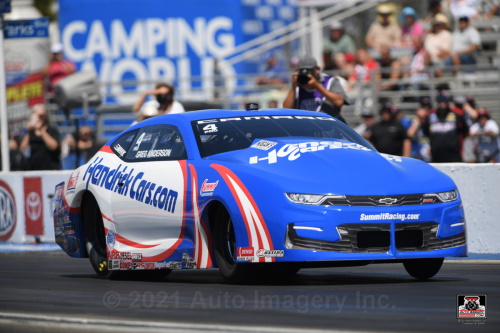 POMONA, Calif. (August 3, 2021) – There is not a faster Pro Stock car in NHRA’s 2021 Camping World Drag Racing Series than the HendrickCars.com Chevrolet Camaro, and Greg Anderson knows good and well that significant milestones are soon to be reached. The four-time world champion and 96-time national event winner’s enthusiasm is somewhat tempered with disappointment after nearly achieving a massive victory this weekend at the Lucas Oil NHRA Winternationals, but the runner-up finish he logged at Auto Club Raceway at Pomona is merely fuel for the fire.

“It’s frustrating, but any time you get this close to winning, it makes you that much hungrier the next time,” said No. 1 qualifier Anderson, who claimed the 114th pole of his career and eighth of the season before racing to his fifth final round of the year on Sunday in sunny SoCal. His performance in Pomona secured his spot in the 2021 NHRA Countdown to the Championship.

As the low qualifier, Anderson earned the bye run in the first round, and he made his way down the quarter-mile to the quickest run of the eliminations-opener, a 6.606-second pass at 206.95 mph. A second-round victory over Chris McGaha, 6.648, 207.05 to 6.704, 207.11, set him up for a head-to-head match with KB Racing teammate Kyle Koretsky in the semifinals.

There, Koretsky was quick off the starting line, but Anderson had the difference soon made up. He crossed the finish line first with a low-of-the-round 6.649, 206.54 to 6.702, 207.50 and secured lane choice over Aaron Stanfield in the final.

Anderson’s money-round meeting with second-generation Pro Stock driver Stanfield marked the 163rd final of his long and decorated career. The seasoned veteran missed the win light – and tying Warren Johnson as the most winning driver in the history of the class – by just three-hundredths of a second. Stanfield clocked a 6.652, 207.69 to 6.660, 207.08 to claim this weekend’s gold.

“[Aaron Stanfield] is a great racer, and he earned it today,” said Anderson. “But this HendrickCars.com Chevrolet Camaro is going to have its day very soon.”

The next event for the NHRA Camping World Drag Racing Series Pro Stock competitors will be the Menards NHRA Nationals presented by PetArmor at Heartland Motorsports Park in Topeka, August 13-15, 2021.