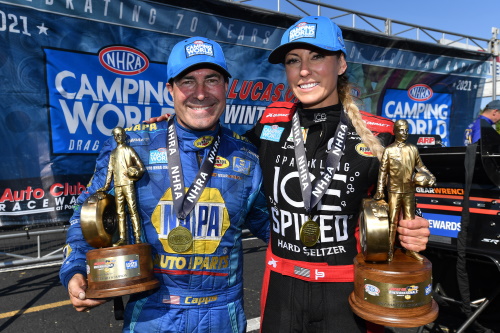 Pruett followed up a stout No. 2 qualifier performance aboard her DSR Sparkling Ice Spiked Dodge//SRT Top Fuel Dragster with her second trip to a final round showdown in consecutive weeks. She earned the second place position on the eliminations ladder, along with five important bonus points, by speeding to the provisional pole position on Friday and then posting the second quickest run of Q2 to put her on the starting line for the opening round against No. 13 seed Steve Chrisman. A 3.906-second elapsed time run by her HEMI®-powered machine at 268.01 mph gave her the round win and a quarterfinal bye run. 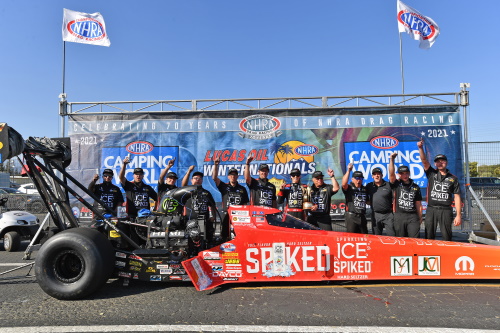 Following another solid 3.931sec./272.12 mph pass on her single run, Pruett staged next to her semifinal opponent, No. 3 seed Mike Salinas, and ran him down at half-track to turn on win lights with a 3.927 sec./273.16 mph pass to advance to her second final round appearance of the season after her runner-up performance last weekend at Sonoma Raceway.

Pruett was lined up and ready for battle against No. 7 qualifier Justin Ashley in the final Top Fuel showdown in the sweltering heat at the Pomona dragstrip when her opponent opted to err on the side of caution after experiencing symptoms of extreme heat exhaustion and not take the run. That provided Pruett with her second solo run opportunity of the day, a 4.021 sec./271.52 mph pass, and an uncontested win to officially earn a Wally trophy for the ninth time in her Top Fuel career, the second time at Auto Club Raceway at Pomona (2017), and her first victory of the 2021 NHRA season. 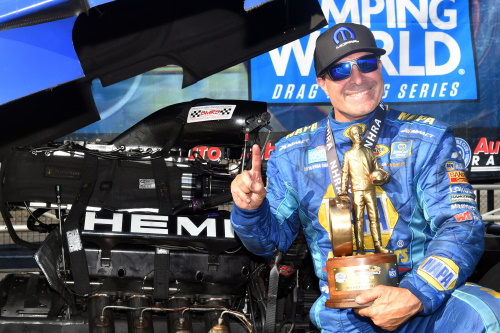 In Funny Car action, after earning his fourth No.1 qualifier position of the first ten NHRA Camping World Series season events this season, Capps powered his DSR Dodge Charger SRT Hellcat through the elimination rounds with consistent 4.1-second runs and wins over Bob Bode, Bob Tasca and longtime rival John Force to advance to his second final round appearance of the season after his runner-up finish at the Mopar Express Lane SpringNationals Presented by Pennzoil in Houston.

The third and final event of the NHRA’s “Western Swing” didn’t quite end the way No. 5 qualifier Matt Hagan had hoped after earning a coveted win at the Dodge//SRT Mile-High Nationals in Denver, Colorado, and his runner-up performance at the Sonoma Nationals in Sonoma, California.

The reigning Funny Car world champion began the day by staging his DSR Performance Dodge Charger SRT Hellcat Redeye next to Force in the opening round. After Force double-bulbed, Hagan hit the throttle first to take the early lead but soon saw his opponent close the gap and edge past him right before the finish to shorten his day and close out three consecutive weeks of racing.

The Cruz Pedregon Racing team had another promising weekend as team owner and Funny Car driver Cruz Pedregon qualified his Snap-on Tools Dodge Charger SRT Hellcat fourth on the Funny Car eliminations ladder. He faced off against Tim Wilkerson in the opening round and took the win with a 4.103 seconds E.T. at 263.46 mph to advance. The three-time Pomona winner saw Force next in the quarterfinals and had a good run going until tire haze at mid-track saw Pedregon hesitate just enough to make it a close finish posting a 4.361 sec losing effort to his opponents 4.353 second round win.

Competition will resume in two weeks with the Menards NHRA Nationals Presented By PetArmor at Heartland Motorsports Park near Topeka, Kansas, for the first of just three remaining national events before the NHRA’s seven-race “Countdown to the Championship” playoff series begins September 9 at the Mopar Express Lane NHRA Nationals Presented By Pennzoil in Reading, Pennsylvania, and concludes with the NHRA finals in November in Pomona, California. 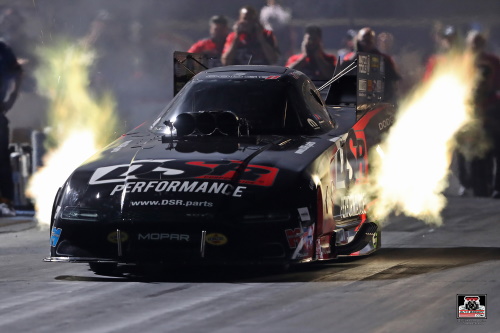 “It’s been a tricky track all weekend here at Pomona with these hot temps and (Crew Chief) Dickie (Venables) got the car to go down a very tough race track to give us a fighting chance. It just didn’t run good enough. We learned a lot racing in this heat and in conditions of which we had very little data. Now we do have some data if we face hot conditions like this in the future. We’re ready for a little break next weekend before we start again in a few weeks at Topeka (Kan.) and Brainerd (Minn.). It’ll be hot in Kansas and maybe some of what we learned here will help us there. We have a lot of racing left; this is the halfway point of the schedule. We’re going to dig in deep, work hard and win a few more of these races.” 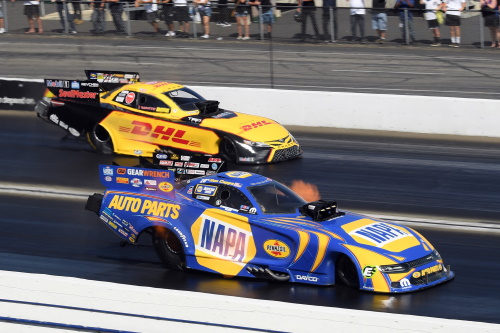 “I was hoping a win was coming. This team, time and time again, they’ve given me one of the coolest cars to drive and this (weekend) was one of the most extreme conditions we’ve ever had. To do it at Pomona in the summer, with all my friends and family here, I can’t even tell you how amazing it is. We’re going to have a blast (celebrating).”

“I was thinking this week maybe I should stop saying ‘a win’s coming,’ because I felt like I was jinxing it but I truly felt like PacMan. You know, we were just chomping through these Camping World series points – semifinal after semifinal, a final in Houston. We’ve been consistent and just chomping these points up week after week. I really think we can have the regular season point lead going into the Countdown, we just need to keep doing what we’re doing.

“These were probably some of the most extreme conditions I’ve driven a Funny Car in, and maybe even the most fun car to drive. Everyone’s been tearing their hair out trying to get down the track and we had things happen and cylinders going out and (Crew Chiefs) Guido (Dean Antonelli) and (John) Medlen were just leaving it be because my NAPA Dodge was running like a bracket car. They’ve got such a nice tune-up that you can put a cylinder out and get through that rough spot and still make it down the track. We were quietly going about it every run.” 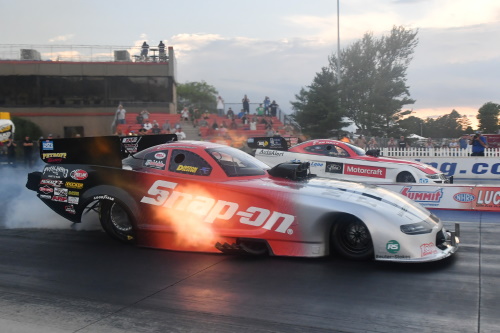 “We had a good solid event. We qualified fourth, which is great, with a 3.96-second run at 317 mph on Friday. We stumbled a little bit on Saturday trying to get the track figured out. Sunday we were strong starting out with a 4.10 second pass to dispose of Tim Wilkerson. In the second round we faced John Force and it was a great close race with a 4.35 to 4.36 but came up short. I clicked it off just a little bit early after I spun the tires at half-track and I just went on auto pilot and shut the engine off when I got concerned about the engine revving up, but I probably could’ve kept going for a few more feet and won that round that would have put us in the semis.

“Overall it was a good event for us. It was challenging with the track at more than 140 degrees track temperature, which is hotter than we’ve been on and in years. In fact, (Crew Chief) JC (John Collins), even with all the data he had accumulated through the years, had never been in this hot of a condition so overall when you get a quarter final result, it’s a good day for the Snap-on Tools Dodge Charger SRT Hellcat. We’ll look forward to a match race in Norwalk on Saturday night, the traditional “Night Under Fire” exhibition event before we focus on Topeka (Kansas). Topeka is a great event for me. I’ve won quite a few races there. With Larry Miner and Joe Gibbs. I love the atmosphere there and the track is strong with really good grip and maybe one of the best surfaces on the circuit so I’ll looking forward to that. We’re still figuring things out, working out some kinks to make our race car better and I’m trying to do a better job as a driver but overall the needle is pointing up.” 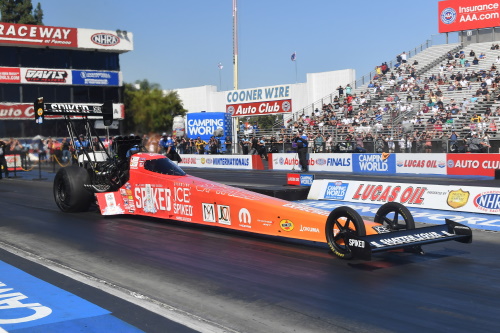 “Justin (Ashley) is an incredible competitor and I wanted nothing but to race against him. This is about the perseverance of this Sparkling Ice Dodge//SRT Mopar team, our dedication to do this on a home track is phenomenal. Thank you so much to everybody that stuck with us. I mean, we dug deep. It’s been a long time since I’ve seen Wally (trophy). The most impressive part for me today was how our team has continued to persist and persevere and grow into the success region that we have right now.

“For (Crew Chief) Todd Okuhara to have an aggressive tuning persona and an application while being in the mud and Neal Strausbaugh, having leadership ability and bringing us all together. It’s about the fundamentals of what’s happening in the trailer and having each other’s back and pulling the rope in the same direction. We had been doing that, but we really got in sync together and that’s what makes me the most proud. This win is because of the progression over the last couple of weeks and what it has taken. The Dodge SRT Sparkling Ice team definitely deserves every bit of this one no matter how it came. I’m very proud of them.”