NEW RICHMOND, WI (August 7, 2021) – A Louisiana driver will lead some of the best Late Model drivers in the country to the green flag for the 34th annual USA Nationals. Cade Dillard led all eight laps of Friday’s pole dash at Cedar Lake Speedway to earn the first starting position for the 100-lap finale.

The Robeline, LA driver survived double Drydene Heat races under a passing points format to lock himself into one of the top eight spots for the $50,000-to-win event. It also earned him the chance to race his way onto the front row. 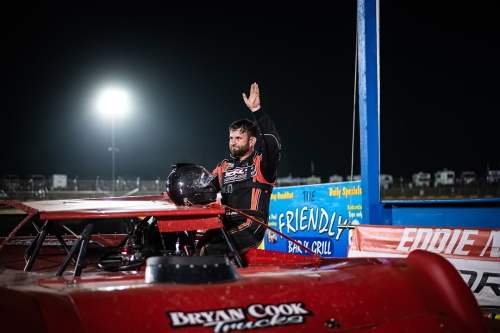 The “Thriller” drew the pole for the dash and never looked back, thundering ahead of Ashton Winger en route to the victory.

Even though he’s thrilled with Friday’s performance, he knows there’s a lot of racing left.

“It’s pretty cool to be locked in and get on the pole of an event as big as this,” Dillard said. “There’s a long way to go, so hopefully, I can make the right changes on my car and hopefully be good at the end. That’s where I’ve struggled in the past with this event.”

Every driver racing at USA Nationals saw a different format on Friday than what they’re used to with the World of Outlaws. Drivers earned passing points in their two Heat Races, locking the top 16 into the show.

It’s a format that didn’t faze Dillard one bit because he’s familiar with it.

“I come from Modified racing,” Dillard said. “The USMTS; that’s what we do every night so passing points that didn’t really bother me. We just had a couple of lucky breaks in that second [Heat Race] and just had a really good car.”

Joining Dillard on the front row of the $50,000-to-win Feature is 2020 World of Outlaws Rookie of the Year Ashton Winger.

After cashing in on $6,000 by winning Thursday’s held over Morton Buildings Feature, his second-place finish in the dash only added to Friday’s accolades.

The USA Nationals has been on the Senoia, GA driver’s bucket list for a while. But Winger knows there’s still work to do if he wants to find Victory Lane again this weekend. 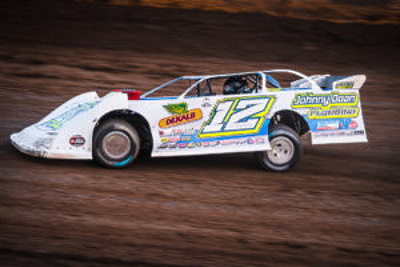 “We’ve got to be better, and we’re a little bit off whenever the racetrack progresses to the bottom,” Winger said. “At some point, we’re going to need to move to the bottom tomorrow, and we have to make sure we’re not 15th.”

Despite having a fast car all night, Winger stated he needed some luck to be in a good position for Saturday.

“I got pretty lucky in my first heat because the guy who was running second, I think something broke on his car, and I went from sixth to fourth and got points without passing anybody,” Winger said. “Racing is so much about being at the right place at the right time. I definitely think we had some stuff go our way today.”

Kyle Bronson, Jimmy Owens, and Brandon Sheppard rounded out the top five in the pole dash. Max Blair, Brandon Overton, and A.J Diemel made up the rest of the field.

After the pole dash, 11 drivers battled for a $2,500 prize in the Kyle Koch Memorial F.A.N.S. Fund dash. Mark Whitener of Middleburg, FL, took the lead on the outside of Garrett Alberson and held on to win the event. 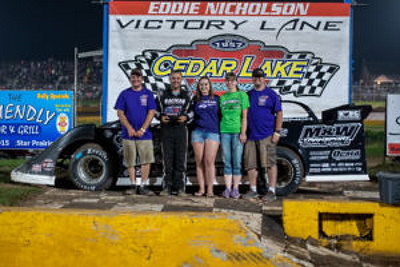 The dash is one of the reasons the Big Frog Motorsports is racing this weekend at Cedar Lake.

“Ultimately, that’s why we’re here; them guys stepped up and helped us get here financially,” Whitener said. “The Big Frog team pulled this car up here and got me here, and my fans put me on the front row [of the dash], so I have to thank them guys.”

UP NEXT: The Most Powerful Late Models on the Planet return to Cedar Lake Speedway on Saturday, August 7, for day three of the USA Nationals. A pair of Last Chance Showdowns will help set the field for the 100-Lap, $50,000-to-win finale. 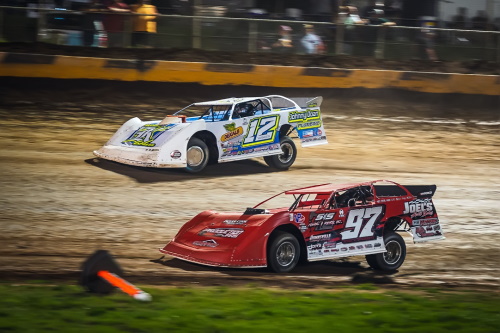