In the Jr. Dragster classes, Zach Shirkey scored the Coolshirt Systems Pro Jr. Dragster victory by running 7.932 to Keaton Peterson’s 7.92, both on a 7.90 index. It was Shirkey’s holeshot advantage that secured the win. Donald O’Meara III earned his first win in Classic Graphix Top Jr. Dragster in a double red-light final round, with O’Meara going .005 red and running 8.992 on an 8.93 dial-in in his “Lucky Duck” ’21 Mike Bos dragster, while Zack Gale went .061 red and ran 9.132 on a 9.05 dial-in. 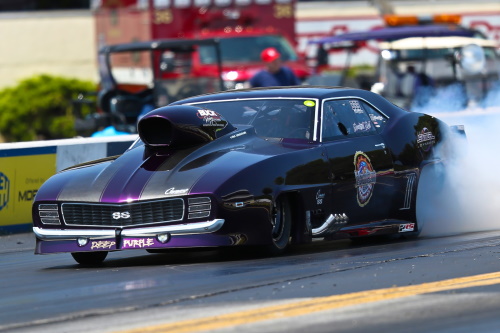 “Mountain Man” Mike Achenbach and his team faced more than their fair share of adversity over the weekend, but their hard work and dedication were rewarded in the form of the Nazareth, Pennsylvania-based team’s first-ever Pro Nitrous victory. Achenbach used a starting line advantage and a 3.788 at 198.90 in his Brandon Switzer-tuned, Buck-powered “Deep Purple” ’69 Camaro to defeat Ed “Ironman” Burnley’s 3.765 at 199.26 in the final round.

“We struggled, we worked our asses off, we had a lot of problems, and it’s just our time,” Achenbach said. “We had to weld a new front clip on it because I hit the wall after getting some water under the tires in testing, then we had engine issues. Had to change an engine out, had to redo some wiring and air lines on it. The second round we blew the transmission and had some more valvetrain issues. We got those fixed and here we are.”

“It’s very rewarding because we’re only maybe two years into this,” Achenbach said. “This is one of the top-of-the-line classes to run. I owe a lot to my teammate, all my team, and Brandon Switzer and Melissa Switzer. Eric Davis also does a lot and helps me out. It’s just a big family.”

After struggling in rain-shortened qualifying, Achenbach went into eliminations as the No. 10 qualifier. He scored a big win over No. 1 qualifier and two-time world champion Tommy Franklin in the opening round when he ran a 3.757 at 193.90 next to Franklin’s 4.447. That win gave him a bye run in the second round, which he used to run a smooth 3.814 at 185.84. He moved on to the final round when Rob Hunnicutt left the starting line .269 too soon on a 3.794 pass, while Achenbach posted a 4.043 at 189.15 in their semifinal pairing.

Two-time Pro Boost world champion Kevin Rivenbark rolled into the Northern Nationals with a sizable points lead in his ProCharger-boosted GALOT Motorsports ’69 Camaro after winning the last race on tour, the Summer Shootout. The North Carolinian extended that lead yet again with his final-round win over former teammate Todd Tutterow in a rematch of the Summer Shootout final. Rivenbark was second off the line, but powered on to a 3.691 at 204.14 to defeat Tutterow’s 3.707 at 205.91.

“This win feels good, actually better than the last one because they put 50 pounds on us after the last race,” Rivenbark said. “We made some changes, pulled the lockup [torque converter] out and went back to a non-lockup configuration. Went out and tested and felt good about it, that we would still be strong. It just shows that GALOT Motorsports and Proline Racing and ProCharger and everybody involved just doesn’t give up. They keep going at it. That’s what it takes. We’ll keep doing good and we’ll keep getting rules put on us.”

Tutterow in his screw-blown P2 Contracting ’20 Camaro struggled in the two Friday qualifying sessions and went into eliminations in the No. 14 spot. He left any gremlins behind in qualifying, though, as he fired off a 3.72 at 205.82 to beat No. 1 qualifier Melanie Salemi in the first round. The Pro Mod veteran ran a 3.738 on a second-round bye run, then a consistent 3.731 to get the win over a red-lighting Daniel Pharris in the semis. 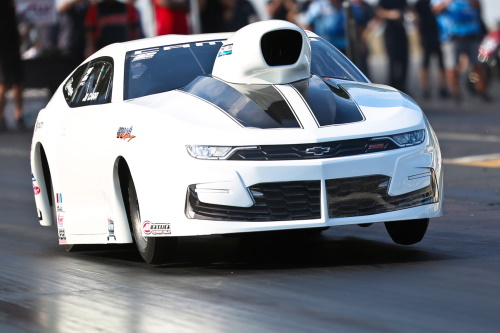 Last year’s Extreme Pro Stock championship runner-up, JR Carr, was admittedly in a bit of a first-round funk for the first few races of the 2021 season. But he won the Sonny Leonard Memorial Race at the PDRA Summer Shootout, then followed that up with a second consecutive victory at the Northern Nationals. In the final round, Carr ran a 4.097 at 177.23 to Chris Powers’ 4.095 at 175.66, but the race was over at the starting line when Powers went .006 red. Carr followed with a .218 light.

“It’s very much needed,” Carr said of the second win. “I’ve been working on my lights. I had good lights in testing, I had good lights through qualifying. That one [in the final] was not good, but there was a major distraction. That’s not a normal deal. It is what it is. We’re really happy. It was a good race – two 4.09s. And that’s the way it’s supposed to be. I can’t say enough about everyone on this team. I say it every single time, but they are the support for this to make it happen. I’m just one guy. They all deserve it so much. I’ve let them down a lot this year. It’s been rough. Maybe I can do a little more before the year’s over.”

Carr qualified No. 1 for the sixth time in as many races in his Frank Gugliotta-tuned, RJ Race Cars-built CP Carrillo/Maxima Racing Oils ’20 Camaro. The Washington native posted a 4.092 at 178.10 to defeat Dave Hughes in the first round before running a 4.097 at 176.95 to beat a red-lighting Elijah Morton and secure his spot in the final round.

Powers, from nearby Carlisle, qualified No. 2 in his Chuck Samuel-tuned Sonny’s Racing Engines ’14 Camaro. He moved on past 2018 world champion Steven Boone in the opening round with a 4.108 to Boone’s 4.169. He won his second-round pairing with defending world champion Johnny Pluchino when Pluchino went red by .001 on a 4.129, while Powers ran a 4.152. 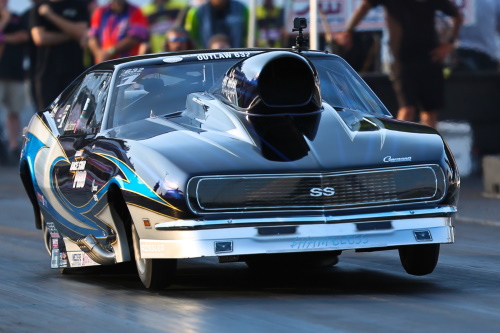 Pro Outlaw 632 points leader and defending world champion Wes Distefano continued to show why his Musi-powered $hameless Racing ’68 Camaro has been a frontrunner since he joined the class a couple seasons ago. He defeated two-time world champion Dillon Voss in the final round, running a 4.222 at 169.76 to Voss’ 7.096 at 64.94 to get his third PDRA victory of the season.

“The whole crew did a great job,” said Distefano, who also won the $10,000-to-win Summit Racing Equipment PDRA ProStars race on July 31. “We did our job staying hydrated, trying to be smart. In this type of weather, your body is probably the biggest thing that’s going to give out on you. We wanted to make sure everyone was safe and healthy staying hydrated. As for the car, we actually put together some stellar runs, we thought, for the conditions. We knew we had a good hot rod going in [to the final]. We were battling some adversity like normal. These things always fight you back. This being our third win, for the points, this is great. This is our best PDRA season ever, and I just couldn’t be happier.”

Voss in his Voss-powered Vigilante Associates ’17 Corvette qualified second behind Distefano. The Florida driver was consistent, running a 4.287 to beat James Beil, a 4.296 to defeat Brian Werner, and a 4.298 to win over Daryl Stewart, who went .004 red with a 4.249. 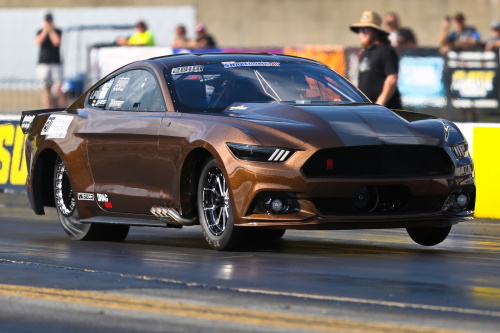 Points leader Tim Essick qualified No. 2, but he had the car to beat in Pro Street eliminations. He had to battle first-time No. 1 qualifier Nick Schroeder in the final round, where Schroeder left first with a .003 reaction time to Essick’s .005. Essick in his ProCharger-boosted “Brown Sugar” ’18 Mustang quickly took the lead and carried it out to a 4.001 at 185.92 to finish ahead of Schroeder and his 4.074 at 190.32.

“Today was about monitoring track temperatures and just following the program,” Essick said. “Not trying to beat the person in the other lane or anything like that, just race the racetrack. I’ve tried to teach a couple guys that just to try to help get them along, and it’s working. Everybody’s learning and making good laps. Anybody can win on race day. We’ve got a good group of people [in Pro Street] and everybody likes helping one another out. It’s a nice bunch to race with. I’m proud to be here.”

TOP SPORTSMAN
A pair of Ohioans met up in the Elite Top Sportsman final round, as Steve Drongowksi and Tim Molnar paired up their nitrous-fed hot rods. Drongowski got the starting line advantage in his Chris Rini-tuned, Buck-powered ’55 Chevy and ran a 3.975 on a 3.96 dial-in to take the win. Molnar in his ’68 Camaro broke out with a 3.872 on a 3.88 dial.

Points leader Nick Meloni added a second victory to his points total with his consistent TT Motorsports ’69 Camaro. He ran a 4.319 on a 4.29 dial-in in the final round, but he got the win light when Gino Fagnilli went red by .004 in his ’67 Mustang.

TOP DRAGSTER
Top Alcohol Funny Car star DJ Cox raced to victory in Elite Top Dragster, adding to his two recent NHRA Top Alcohol Funny Car wins. Cox posted a 4.226 on a 4.19 dial-in in his ProCharger-fed DXI Construction ’20 American dragster in the final round, while opponent CJ Morley went red by .001, negating a 4.044 on a 4.04 dial in his ’19 Diamond dragster.

Defending Top Sportsman world champion Stacy Hall, who pulls double duty in Top Sportsman and Top Dragster, collected his first Top Dragster 32 win of the season. Hall used a 4.397 on a 4.39 dial-in in his Fulton-powered ’21 American dragster to win in the final round by .004. He defeated Blake Denton, who ran a 4.312 on a 4.30 dial in Tommy Franklin’s Musi-powered American dragster.

The PDRA will have the rest of August and September off before resuming at the penultimate race of the 2021 season, DragWars presented by Proline Racing, Sept. 30-Oct. 2 at GALOT Motorsports Park in Benson, North Carolina.