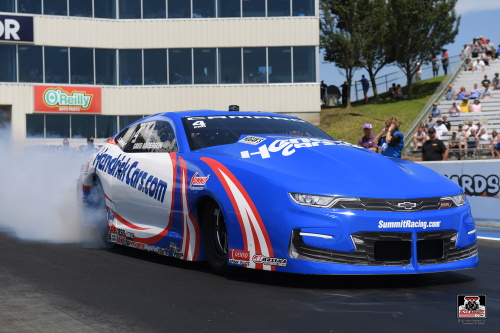 TOPEKA, Kan. (August 16, 2021) – KB Racing enjoyed an exceptional weekend in Topeka at the 32nd annual Menards NHRA Heartland Nationals presented by PetArmor. Greg Anderson accumulated positive marks in his HendrickCars.com Chevrolet Camaro and will leave with the points lead intact, and KB Racing teammate Dallas Glenn won the event in the second all-KB Racing final of the year and 49th in the history of the team.

“We couldn’t be more proud of Dallas and Kyle [Koretsky, runner-up] for their performances today,” said Anderson. “Getting one car to the final is not easy in Pro Stock, so to have two of the KB Racing horses going to battle for the trophy is really cool. This whole KB Racing team is pulling their weight and doing a great, great job, and it’s just a lot of fun to see the next generation of Pro Stock developing.”

Anderson, the No. 2 qualifier, once again had one of the quickest cars in the field with his HendrickCars.com Camaro. His day came to an end, though, in the quarterfinals, when Koretsky utilized a starting-line advantage to defeat the boss. Second-generation Pro Stock driver Koretsky launched with a .022-second reaction time and followed through with a 6.671, 205.60 to Anderson’s .039 and 6.655, 205.66. The margin of victory was just .0012-second.

“It was a tough day for me and my HendrickCars.com Chevy Camaro, but seeing those two young guns race in the final helped put a smile back on my face,” said Anderson.

In the first round of eliminations, KB Racing-powered Matt Hartford knocked out Aaron Stanfield on a holeshot, a move which benefitted Anderson greatly. Stanfield had won each of the previous two events and was just behind Anderson in the No. 2 position in the Pro Stock standings heading into the event.

“It’s great to still have the points lead – we’ve had it all season – and the ball is in our court,” Anderson continued. “We’ve got one race left to get as many points as possible before the Countdown to the Championship begins, and the best way to do that is to go out there and run the table. We’ll have our work cut out for us, but we know what this KB Racing team can do.”

The next event for the Pro Stock competitors in the NHRA Camping World Drag Racing Series will be the Dodge // SRT NHRA U.S. Nationals at Lucas Oil Raceway at Indianapolis, September 1-5, 2021. 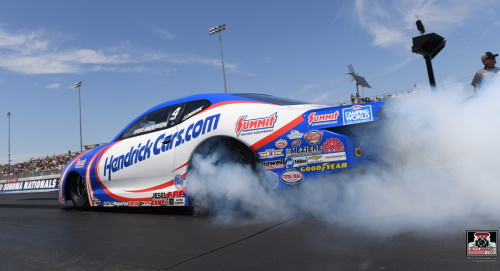