MECHANICSBURG, PA (August 2, 2021) – As Gregg Satterlee anticipated the green flag, he knew the importance of a good start. He knew whoever reached Turn 1 between himself and Max Blair was on the right track to cash in on $10,000.

The Rochester Mills, PA driver aced the start, beat Blair to the corner, and held on for his first World of Outlaws win of the season Friday night at Williams Grove Speedway. 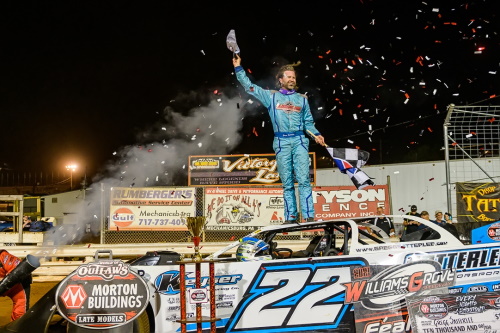 Satterlee’s ability to grab the lead early helped him set his own pace throughout the 40-lap Feature, allowing him to save his tires as long as possible.

“Chasing cars here [Friday] was not the thing to do because we had soft left rear tires on, and we were trying to stretch these tires as far as we could,” Satterlee said. “I really felt like I struggled there the last 10 laps, but I think probably everyone had to have a similar deal going on with their tires. My left rear is totally shot.”

The start wasn’t the only battle Satterlee faced during the race. “The Truth” fought through lap traffic while holding off NASCAR Cup Series star Kyle Larson, who’s won just about every race he’s entered in the past few weeks. 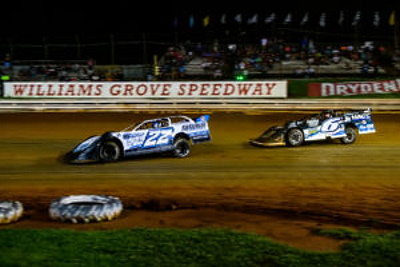 The Elk Grove, CA driver, peeked around the outside of Satterlee but couldn’t get by him despite the heavy traffic.

Satterlee stayed patient, hitting his marks until he could adjust.

“It was tricky; I could certainly see [Larson] had got on the outside of me at least once,” Satterlee said. “Eventually, I was able to move my line around a little bit and use as much of the race track up that I could.”

The win is Satterlee’s fourth career World of Outlaws triumph and first since 2014.

Mechanical trouble ended Larson’s night in the final 10 laps, relegating him to a 22nd place finish.

Four-time winner Chris Madden finished second, his first podium finish in four races. The Gray Court, SC driver was content with his runner-up finish but felt his car wasn’t as good as it needed to be. 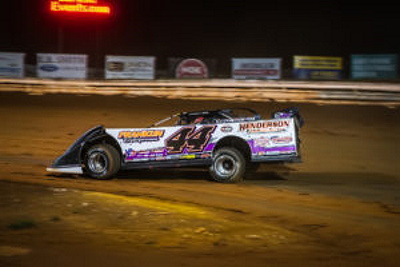 “We made some adjustments before the Feature, and I guess I went the wrong way,” Madden said. “We’ll take second, and maybe it’ll get us back going in the right direction. We’ve had a great race car; we just haven’t had any luck. Hopefully, we can get back on a tear and get us a win before the weekend’s out.”

From Stephens City, VA, Kyle Hardy grabbed the last spot on the podium—tying his best career finish with the World of Outlaws.

Hardy had to work his way back to the top-three after dropping to eighth early in the race. It’s a mountain he expected to climb based on his car’s setup.

“The way our package is, we tend to fire off late,” Hardy said. “It takes a little bit for us to get going, so we have to wait for it to get going before we tear the tires up.

“But to work back up to third, holy cow we’re happy about it.”

Gregg Satterlee’s anticipation of what to do before the race started showed off his experience 1/2-mile tracks. It’s a style of racing he’s comfortable with, as everything seems to come together.

“These big tracks where you drive the car straight and use a lot of momentum and stuff, it just seems to click,” Satterlee said.

UP NEXT: The Most Powerful Late Models on the Planet head to Ohio on Saturday Aug. 21 for a stop at Sharon Speedway in Hartford, OH. 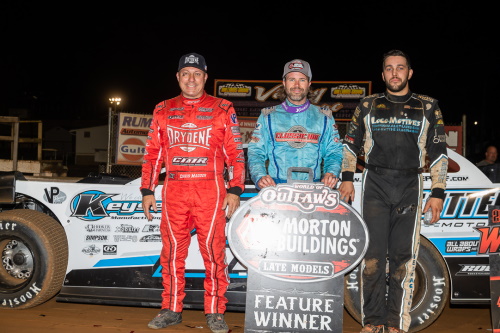