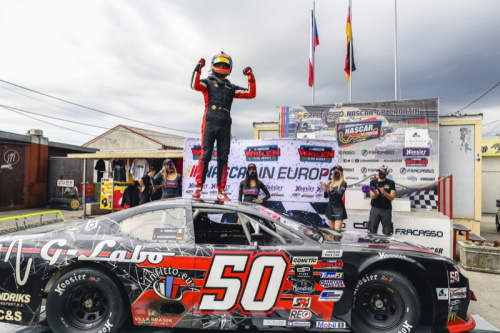 (September 19, 2021) – The EuroNASCAR 2 championship leader is back in Victory Lane. With another dominant performance, Tobias Dauenhauer led all 14 laps of the Sunday’s race at Automotodrom Grobnik in Croatia. The German pulled away right after the start and sped to victory at the wheel of his #50 Hendriks Motorsport Ford Mustang. By collecting his fourth win of the season, Dauenhauer struck back after finishing sixth on Saturday due to a penalty.

Dauenhauer will therefore bring his points lead back to 32 points ahead of NASCAR GP Belgium at Circuit Zolder on October 9-10. What looked like an easy win for Dauenhauer, was a ton of work for the 2020 EuroNASCAR 2 runner-up. Due to the challenging characteristics of the 4.2 kilometer long track on the Croatian Riviera, the German had to give all his best to keep his Mustang at the top of the standings. 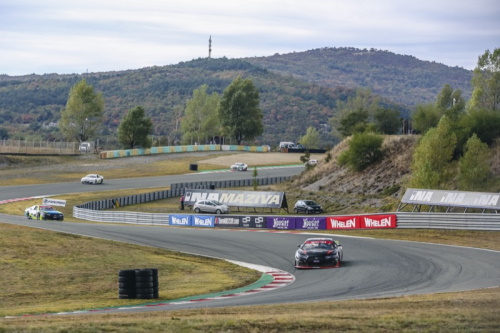 “After the penalty yesterday, it’s a real relief”, said the 23-year-old Heppenheim native after the race. “Today was a good day for us as everything went just perfect. The car was great and I was leading the whole race, so there was nothing more to wish for. Thanks to the whole team that kept the focus and provided me with a fantastic car. Now I look forward to the race at Circuit Zolder, a completely different track than Grobnik. It’s the team’s home track so we are ready to attack at the front again.”

Yesterday’s race winner Martin Doubek was second under the checkered flag and made the Hendriks Motorsport 1-2 perfect. He was followed by Simon Pilate who drove his Chevrolet Camaro by DF1 Racing to the third place. After a contact that caused a puncture on Saturday, the Belgian missed out the podium but on Sunday Pilate bounced back with a strong performance that was rewarded with his fourth top-5 result of the season.

Vladimiros Tziortzis put a lot of pressure on Pilate during the 14-lap race but never found a space to overtake the 19-year-old Belgian. As on Saturday, the Academy Motorsport / Alex Caffi Motorsport driver never took the big risk and focused on scoring important points for the 2021 championship battle. The Cypriot already scored his sixth top-5 finish in this season so far. After finishing on the podium on Saturday, Justin Kunz confirmed his strong pace at the wheel of the #22 Chevrolet and closed the top-5.

After an exciting battle for sixth, Leevi Lintukanto grabbed the win in the Rookie Trophy classification for newcomers in the EuroNASCAR 2 Championship. The Finn made the decisive move on lap 6 against Melvin de Groot, who was then put under pressure by Naveh Talor and Gil Linster. In the end, Talor also got past de Groot on lap 8 to take over seventh, while the Dutchman finished eighth to win the race in the Legend Trophy and take second in the Rookie Trophy standings. 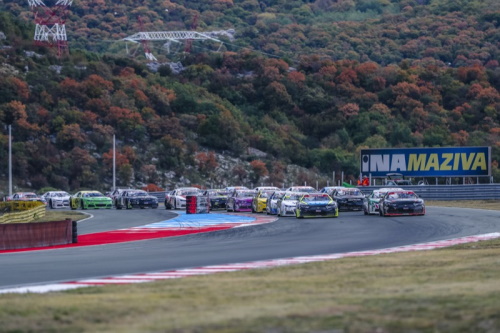 Linster was looking for an opportunity to pass de Groot as well but had to settle for ninth place. The Luxembourgish signed a new contract with DF1 Racing at Autodrom Most and will compete in all remaining races of the 2021 NWES season. 42 Racing’s Francesco Garisto from Italy followed in tenth ahead of Alberto Panebianco, who rounded out the Rookie Trophy podium.

De Groot was joined by Yevgen Sokolovskiy and Max Lanza on the Legend Trophy podium for drivers aged 40 and over. While Sokolovskiy from Ukraine finished 15th, Lanza was 17th under the checkered flag. When the NASCAR Whelen Euro Series heads to Zolder, the battle for the Legend Trophy will heat up even more due to the tight standings in the special classification. Alina Loibnegger topped the standings in the Lady Trophy in 20th.

While the EuroNASCAR 2 Championship will be back in action on October 9-10 at Circuit Zolder, EuroNASCAR PRO Round 8 will begin at 2:20 pm CEST at Automotodrom Grobnik. The last race of the NASCAR GP Croatia will be broadcasted live on EuroNASCAR’s platforms – YouTube channel, Facebook page, Twitch profile as well as on the NWES app and on Motorsport.tv. 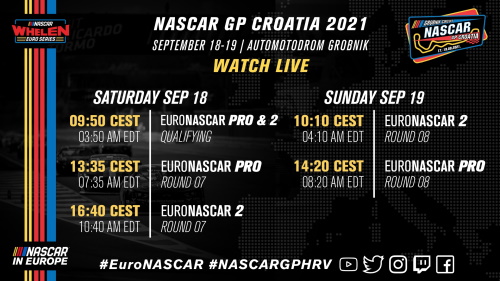 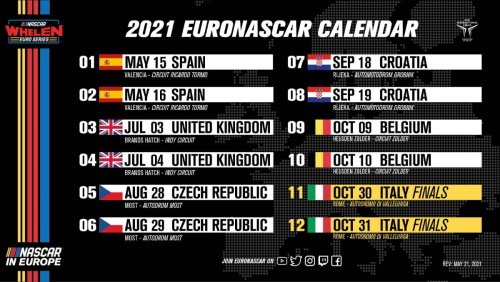