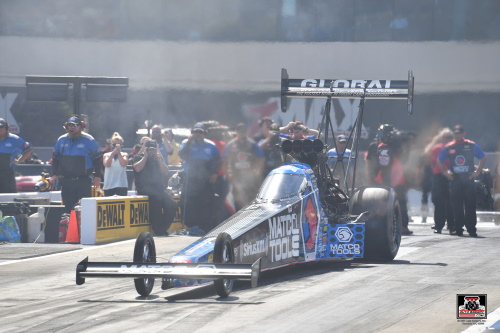 Race Recap:
Antron Brown led the DSR Top Fuel tandem in qualifying at the NHRA Carolina Nationals, securing a position in the top half of the field to start race day from eighth and with the advantage of lane choice over Spencer Massey, his round one opponent. Brown clocked a solid .051-second reaction time, but Massey’s .029-second light gave him enough of a starting line advantage to get the win with his 3.807 E.T. over Brown’s quicker 3.785-second pass, resulting in an uber-close side-by-side race with a mere three-inch margin of victory.

Quotable:
“That’s certainly not what we wanted here at Charlotte today. This Matco Tools team with Toyota and all of our great partners is going to regroup and keep fighting. We won’t let this get us down. The car wore a lot of clutch that run and that’s the first time it wore a bunch of clutch all weekend long. We planned on going out there and running a 3.73 or .74. Hey, Pat Dakin, Spencer Massey, those guys are no joke. That Massey team, that’s a good car. They did a great job. Spencer was on the tree like his old self. We were right where we needed to be with a .51 light. Sometimes that’s how the cookie crumbles, but we’ll regroup and get ready for St. Louis next weekend, a track we’ve done well at in the past. We need to focus on St. Louis and come out swinging. We need to keep focused and positive and not get down. We will use this as fuel to drive us to be better.” 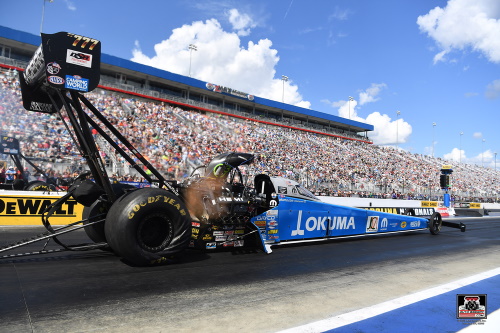 Race Recap:
Aboard the Okuma Top Fuel dragster, Leah Pruett and her opponent Justin Ashley were the first pair of drivers to hit the track on Sunday morning at the NHRA Carolina Nationals. Pruett and Ashley clocked identical reaction times, and both were on good runs until Pruett’s machine dropped a cylinder as it neared the top end and she slowed to a 3.890 E.T. while her challenger clocked his quickest pass of the weekend for the win.

Quotable:
“As the Countdown to the Championship continues, we’re leaving the second playoff race with a disheartening finish with that first-round exit, but it hasn’t demoralized the team. We’re definitely down on power and trying to find out where we’re missing about 500-horsepower in our combination. We’re gaining clarity on that right now and feel confident we’ll get that sorted out before St. Louis. Our Okuma team had a runner-up finish in Sonoma, and that first-round exit here in Charlotte at their headquarters is not ideal. I hate that for all of their wonderful customers and employees that came out here to root our Okuma team on. This team has so much potential, and there is enough time left in the season for us to live up to it, and execute, and that’s exactly what we plan to do. But, to say that this was one of our favorite days, it definitely was not. As a driver, running up against Justin Ashley, I think I’ve raced against him more than anyone else this year. I’m impressed with myself for being able to leave the line with him. Our team has been doing a phenomenal job but unfortunately, we have a current missing link, and we’re doing everything we can to fix that. There’s still a lot of racing left, and we’re focused on gaining wins before the season ends.” 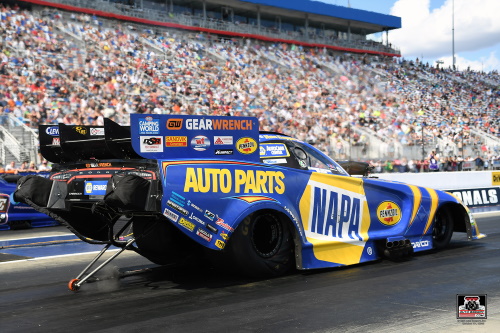 Race Recap:
NAPA AUTO PARTS Funny Car pilot Ron Capps began his race weekend at zMAX Dragway occupying the No. 3 spot in the Countdown to the Championship standings, and after rocketing to the second-quickest run of Q3 and advancing into the semifinals on race day, Capps and the NAPA team jumped to the top of the leaderboard, reclaiming the points lead they held to start the Countdown.

Starting from the fifth qualifying position, Capps’ march to the No. 1 seed began with a first-round win when he clocked low E.T. of the session to defeat Jim Campbell. In the quarterfinals, it was Capps’ right foot that helped propel him to victory over teammate and fellow championship-contender Matt Hagan. Capps was out of the gate first and made a clean, straight pass right down the groove, posting a 3.949 E.T. for the holeshot triumph over his teammate’s 3.938. The semifinals featured a rematch of the Indianapolis final round, with Capps lining up opposite U.S. Nationals winner Tim Wilkerson. Capps and Wilkerson’s machines kept pace down the 1,000-foot stretch with Wilkerson carrying a slight lead from the 60-foot mark on which he used to carry him across the finish line first, ending Capps’ day in the semifinals.

The NAPA team will look to maintain their point lead in St. Louis where Capps is the winningest Funny Car racer in World Wide Technology Raceway history with four event triumphs.

Quotable:
“Here in a couple of hours we’ll sit back and realize we had a great weekend. It’s heartbreaking to have a chance at winning another race and extending the points lead. I really love the journey every weekend with these NAPA guys. Anytime you go somewhere and you have a great time on a trip, it is the journey you remember, and we have that almost every weekend. I love it when things are thrown at the team and the way the NAPA guys diagnosis it, attack it, and fix it. The next thing you know, we’re back in the points lead and when you wake up Sunday morning you hope to have a great day, but you just don’t know. It’s that feeling like ‘do we have what it takes’ and the next thing you know, you’re having a great weekend with a chance to win and we were close today. Another great weekend by the NAPA AutoCare team. Just great calls with taking first pair of the first round. (Crew chiefs) ‘Guido’ (Dean Antonelli) and (John) Medlen, they made great calls all day.

“It’s going to be fun from here on out. We keep saying that, and there’s a great article in National DRAGSTER that editor Phil Burgess did on how many times the points have changed hands this year, which tells you how great this category is right now and it really shows what these teams are going through. We can’t wait to get to World Wide Technology Raceway at Gateway. We’ve had a lot of success in the past there and we’ll need every bit of that mojo to hang on to the points lead.” 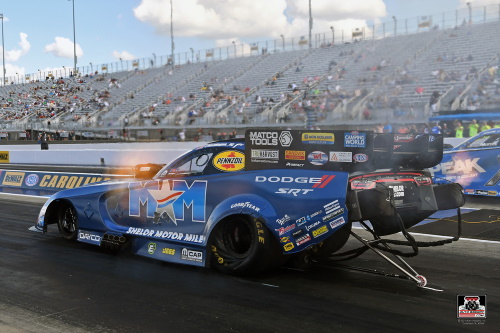 Race Recap:
Defending Funny Car world champion Matt Hagan didn’t miss a beat at his first race back after a two-event absence due to COVID-19. Hagan powered the Shelor Motor Mile Dodge Charger SRT Hellcat to the quickest E.T. of Saturday’s two qualifying sessions to earn the No. 4 starting position and add six bonus points to his team’s total.

The quick and consistent Shelor team carried a seven-round streak of sub-four second runs into Sunday morning at zMAX Dragway. The run streak extends back to Q3 in Reading, Penn. where the Dickie Venables-led team raced to victory with substitute driver Tommy Johnson Jr. filling in during Hagan’s absence. Hagan, who raised the Wally trophy at his last race before being sidelined (Brainerd, Minn.), squared off against Tony Jurado in round one where he clocked a 3.929 E.T. for the definitive win over Jurado, who lost traction early into the run. In round two, Hagan lined up opposite teammate Ron Capps and drove the Shelor Dodge to its ninth consecutive three-second pass but his teammate’s holeshot start enabled him to capture the round win, ending Hagan’s day after the quarterfinals.

Quotable:
“I’m glad to be back, but I got beat on a holeshot in E2, and that’s not ideal or what we were looking for. Dickie Venables and this entire Shelor/Mopar team are doing a great job. We have a great race car. We were low E.T. of that round and both qualifying sessions on Saturday, and we picked up six bonus points in qualifying. I just need to do my job on the starting line. That’s uncharacteristic. I’ve been through a lot the past few weeks and need to bounce back next weekend at St. Louis. But, I feel really good about things. I’ve never won in St. Louis, so why not this year? Capps is a great driver and that’s a great time, and we came up a little short. It happens. It’s just not ideal during the Countdown. I have five races to redeem myself.”