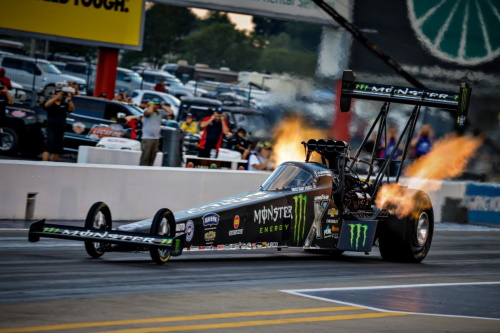 CONCORD, N.C. (September 19, 2021) – Ending the DeWalt NHRA Carolina Nationals weekend with her eighth consecutive No. 1 qualifier and a runner-up finish, Brittany Force and the Monster Energy / Flav-R-Pac team have moved into the NHRA Camping World Drag Racing Series Top Fuel points lead. John Force and the PEAK Antifreeze and Coolant Chevrolet Camaro team had a semifinal finish and Robert Hight and the Automobile Club of Southern California Chevy made a first round exit.

On a role already leading the points by one thanks to three quality qualifying sessions, Brittany Force and the Monster Energy team kept up their high-performance consistency. In the first round of eliminations Force had an impressive 3.689-second pass at an event best 332.67 mph to defeat Arthur Allen’s 5.705 at 116.68. The win matched Force with veteran racer Spencer Massey in the second round. Force would go 3.734-seconds and 325.85 mph despite putting a hole out down track, bettering Massey’s 3.815 at 323.19. 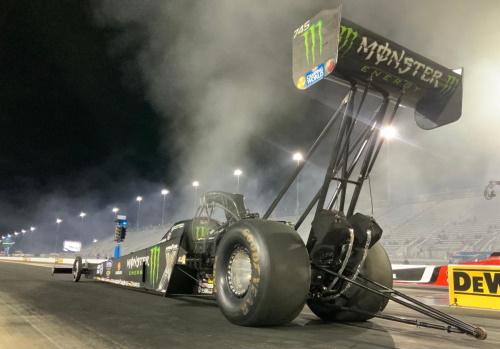 It would be a critical semi-final match-up for the 2017 world champion. Force would face reigning and three-time world champion Steve Torrence. Torrence, sitting just behind Force in the points standings, would handle his dragster to a 3.751 run at 322.81 and come up short to another stout 3.721-second pass at 3331.36 mph from Force and her David Grubnic and Mac Savage led Monster Energy team.

In the 28th final round appearance of her career, fifth of the season, Force would face rookie of the year contender Josh Hart. Force would pilot the Monster Energy dragster to a 3.751-second run at 320.05 mph with an .072-second reaction time falling short to Hart’s 3.770 at 324.12 with a .044 reaction time.

“Tough for a driver to lose in the final round that way. Fortunately, I have a great group of guys around me in this Monster Energy / Flav-R-Pac team and we’re staying positive,” Force said. “We’re still out in front and, overall, we had a great weekend: going to the finals, getting that eighth No. 1 in a row and picking up a lot of bonus points. I’m going to put this weekend behind me, build from it, move on and plan to win the next one.” 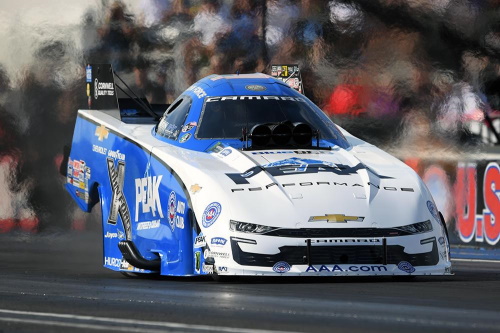 As the No. 1 qualifiers, John Force and the PEAK Antifreeze and Coolant Chevrolet Camaro team had a bye run in the first round of eliminations. Crew chiefs Danny Hood, Tim Fabrisi and Joe Barlam tuned the PEAK Camaro to a 3.983-second run at 332.18 mph. Despite the clean run, Force would concede lane choice to Tim Wilkerson in the second round.

It was a solid side-by-side race with Force leaving first. On paper, Force won the second round on a hole shot with his 3. 975-second pass at 301.40 mph and reaction time of .078 but the 16-time champion had a centerline infraction and hit a cone, disqualifying the run and docking Force 15 points allowing Wilkerson and his 3.953 at 326.79 to win the race

“My guys, Danny Hood, Tim Fabrisi, Joe Barlam, all those young kids over there, they’ve given me a great race car. This PEAK Chevy is really running,” said Force, now sitting third in points. “We’re still in the hunt, just got a little loose, put a couple holes out. We’ll get it fixed, I’ll get back at it and we’ll be good to go.” 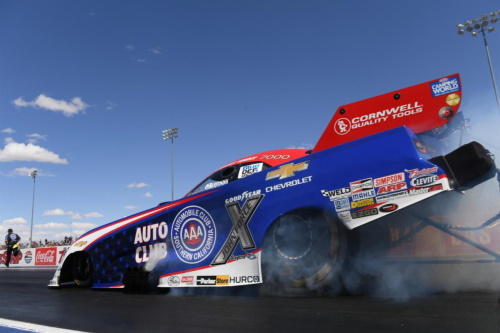 Robert Hight and the Auto Club Chevy team ran into trouble early during their first-round match-up with Terry Haddock. They coasted down the line as Haddock pedaled to the win. For the record, Hight went 11.737-seconds at 83.53 mph to Haddock’s 5.991 at 253.37.

“Wasn’t our race today. We stumbled in the first round. Just making it harder on ourselves going forward but it’s nothing we can’t handle,” said Hight who is now tied for sixth in points. “There are five races left. I said from the beginning I thought you’d have to win three to get this championship, this Auto Club team can still do that.”