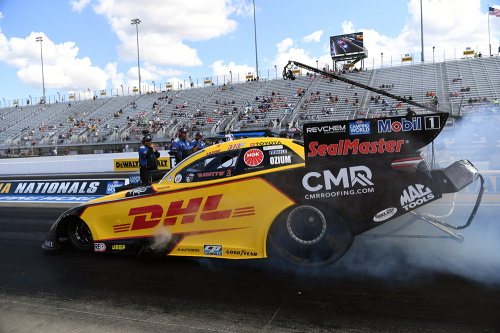 The DHL Toyota Camry Funny Car and J.R. Todd qualified No. 6 at the DeWalt NHRA Carolina Nationals after two days of qualifying. On Friday and Saturday Todd and his team worked to get a solid tune-up for race day. Their best run of 3.899 seconds at 326.08 mph set them up to race journeyman Mike McIntire in the first round.

Todd and his team took full advantage of the information they gathered during qualifying and posted a strong first round winning time versus McIntire. The 10-time Funny Car winner was first off the line and never trailed in the race. His winning time of 3.913 seconds was one of the quickest runs of the opening round.

Heading into the quarterfinals Todd would race Cruz Pedregon for the third race in a row. The DHL Toyota Camry was giving up lane choice, but Todd was confident heading to the starting line. When the Christmas Tree flashed amber Todd took a sizable starting line advantage with a .043 reaction time to Pedregon’s .081, but just before the 60-foot timer Todd’s Funny Car hopped up on the tires and he was forced to try and pedal his race car to regain momentum. Despite his best effort, he was unable to chase down Pedregon and his day ended in the quarterfinals.

“We got a good win in the first round and I felt good about how this DHL Toyota Funny Car was running,” said Todd. “I got a good jump on Cruz in the second round but we smoked the tires pretty early. I tried to get back on it but he was pretty far out there. We held onto fourth place and we have five races left but we definitely need to go more rounds on race day. I am ready to get to St. Louis.”

He will leave zMax Dragway in fourth place in the Camping World Funny Car point standings with five races remaining. 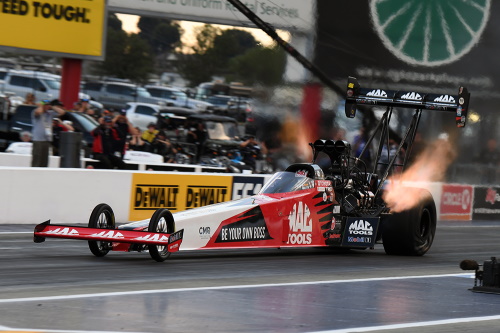 Two races into the NHRA Countdown have Doug Kalitta and the Mac Tools Top Fuel team battling to find race day consistency. They will be heading to St. Louis for the Midwest Nationals next weekend looking to move up in the point standings. Kalitta sits No 10 but with the reset point standings dramatic jumps up the standings are possible at every race. Heading into eliminations at the DeWalt NHRA Carolina Nationals today as the No. 12 qualifier Kalitta was facing the point leader Steve Torrence. For the past several years it has been Kalitta and Torrence battling for the Top Fuel world championship.

Warmer temperatures today changed the conditions for the teams tuning these 11,000 horsepower racecars. Crew chief Rob Flynn knew he would need to find a balance between an aggressive tune up that was also conservative enough to hold traction as Kalitta accelerated down track. As soon as the race began Kalitta grabbed a starting line advantage with a quicker reaction time, .054 to .066, and both cars immediately launched down their respective lanes. As the Mac Tools Top Fuel dragster began to close in on the finish line it began to mix up cylinders and slow. Just before the stripe Kalitta’s motor let go and Torrence took the first round win.

As the racecars crossed the finish line Kalitta’s scoreboard lit up 3.817 seconds at 288.83 mph which was his quickest elapsed time to the race but one of his slower speeds reflecting the damage that was suffered at the end of the run. With every run Kalitta’s team improved throughout the weekend but it was not enough to advance to the quarterfinals. The two-time national event runner-up finisher this season will be turning his focus to the next race.

“We are just going to keep working hard,” said Kalitta, from the top end, “We have a lot of support from Mac Tools and Toyota. This whole team has really pulled together. We just need to get by first round which has been a little bit of a problem lately. We are going to keep digging. These Mac Tools guys have a great attitude and are working hard every race. We are three teams at Kalitta Motorsports that all work together.”

Kalitta will head to the Midwest Nationals in the top ten with five races remaining in the NHRA Countdown. 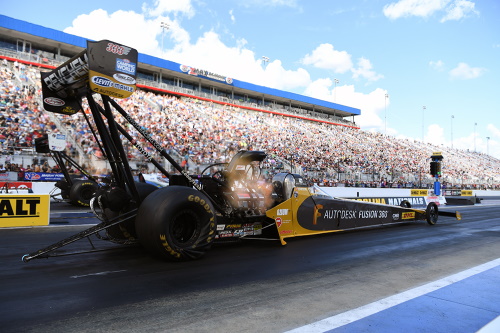 Racing the Autodesk Top Fuel dragster Shawn Langdon was looking to pick up his second Top Fuel win at the DeWalt NHRA Carolina Nationals today from zMax Dragway. Through two days of qualifying Langdon worked with his team to post the quickest runs possible. At the end of the day on Saturday the team was No. 14 in the field. In the first round the 2013 Top Fuel champion was paired with Clay Millican, another Countdown competitor, who was also battling to move up in the standings.

In the first round Langdon and the Autodesk Top Fuel dragster took a starting line advantage with a stellar .024 reaction time but his 11,000-horsepower dragster immediately smoked the tires. Langdon quickly got off the throttle working to regain momentum and attempt to track down Millican who was racing in the left lane. As Langdon was beginning to accelerate Millican ran into issues of his own pedaling his race car numerous times. He was able to narrowly get the win just as Langdon was closing in on him. At the finish line Millican was only running 190 mph while Langdon was right beside him at 248.39 mph.

“I could see him having problems and I was working to get back on the throttle,” said Langdon. “I just ran out of racetrack. I got off the throttle as quickly as I could and then I saw him have problems. I could tell I was gaining on him, but it just wasn’t enough. We will head to St. Louis and get ready for the next one.”