ST. LOUIS, MO (September 22, 2021) — With two NHRA Countdown races under his belt second year driver Justin Ashley is showing he belongs in the Camping World Drag Racing Series championship conversation. A runner-up at the NHRA Reading Nationals two weeks ago was followed up by a semifinal finish at the DeWalt NHRA Carolina Nationals last weekend. He was ousted in Charlotte by eventual winner rookie Josh Hart and the Smart Sanitizer Top Fuel dragster powered by Vita C Shot still moved up to third place in the point standings. The momentum is building for the driver from Plainview, New York, heading to the NHRA Midwest Nationals at World Wide Technology Raceway.

“We have had a great start to my first Countdown,” said Ashley, the 2020 NHRA Rookie of the Year. “Mike Green and Dustin Davis have done an amazing job all season, but of course there is an added level of intensity and focus now that the Countdown has started. This Smart Sanitizer Vita C-Shot team and I love racing for a championship.”

The addition of veteran and world championship winner crew chief Mike Green at the beginning of the season immediately paid dividends with strong finishes and consistent performance. The team began gelling over the summer and the runner-up finish at the historic Winternationals in Pomona was a definite turning point that moved the needle for the second-year driver. 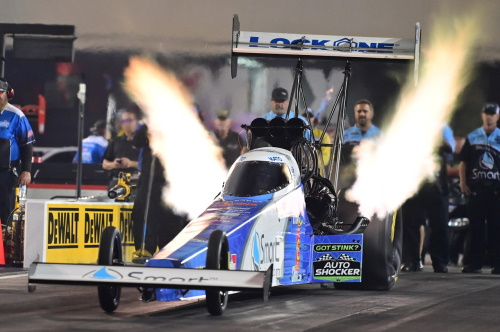 “Since Pomona we’ve been seeing more of the results that we expect. We went to another final and have stacked up several round wins across numerous races. We have also qualified well and picked up a few bonus points along the way,” said Ashley, who also receives significant support from Auto Shocker and KATO Fastening Systems. “ We have been matched up with a lot of Countdown contending teams throughout the first two races and taking advantage of that has helped us make a move in the point standings.”

Ashley started the Countdown in seventh place but the runner-up in Reading jumped him to fourth. Last weekend key wins over Leah Pruett and Clay Millican advanced him into third place and he is just 74 points behind point leader Brittany Force. Three-time world champion Steve Torrence is barely over one round ahead of Ashley (-21) and with five races remaining there is plenty of time for movement both up and down in the standings.

“We just have to take each race one at a time. This is a marathon not a sprint,” said Ashley. “The key is to qualify well and then race what the track gives us. Mike is an expert crew chief and my Smart Sanitizer team does a great job putting a quick and fast Top Fuel dragster together. I can’t thank Dustin and my crew guys enough for all the work they put into this team. It has been a grueling four weeks of back-to-back races.”

This weekend’s NHRA Midwest Nationals will be Ashley’s fourteenth race this season outpacing his eleven-race rookie season for the longest stretch of continuous racing. With five more races to go in the playoffs the young driver is mindful of maintaining his edge and how this season is affecting his team.

“This is the most races I have run in a season,” said Ashley. “Last season we ran two races and then had a big break before finishing off with nine. This year has felt more like what I assume a traditional season feels like. The last four races have been great to get our team in a groove, but I also know we can all use a quick break to reset our minds and bodies before we make the final run for the championship. St. Louis this weekend will be a good test for us and I am excited to get back to World Wide Technology Raceway.”

In Charlotte Ashley announced a new partnership with Vita C Shot for the rest of this season and throughout 2022. The addition of the health-conscious immune system boosting energy drink to the list of corporate partners supporting Ashley highlights the direction of his brand. Ashley has added several companies including The Daily Crave and RISE Brewing Company that are healthy alternatives and also non-traditional motorsport sponsors. Their involvement with Justin Ashley Racing from a branding and awareness standpoint have continued to enhance their bottom line throughout the season.

“Our goal with every sponsor is to put them in a position to achieve and exceed their business objectives,” said Ashley. “Being a part of this team and the NHRA is an amazing opportunity that is economical and has a huge impact. Our Fox TV ratings from the Reading Nationals showed we reached over one and a half million households. That is the kind of exposure any company would be thrilled to be a part of.”