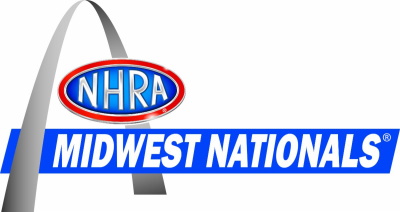 MADISON, Ill. (September 23, 2021) – September has already been a great month for Tim Wilkerson and now the Funny Car veteran has a chance to cap it off in style at his home track during this weekend’s NHRA Midwest Nationals at World Wide Technology Raceway in St. Louis. Wilkerson has picked up two victories in three weeks, including last weekend at the second race of NHRA Camping World Drag Racing Series’ Countdown to the Championship, and a third this month would put the Springfield, Ill. native in a prime position. 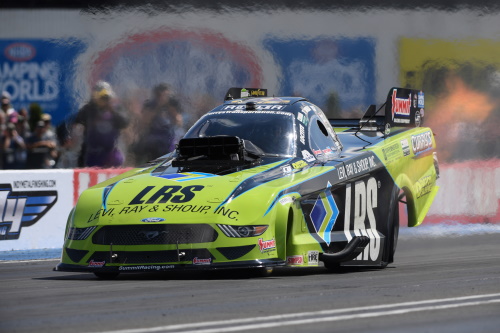 In the process of winning at Indy and Charlotte, Wilkerson has made life miserable for other teams, which is something he has long enjoyed in his 11,000-horsepower Levi, Ray & Shoup Ford Shelby Mustang. After going five years without a win, Wilkerson found the winning combination at the U.S. Nationals in Indy and he’s not slowing down. While he’s not worried about championships, Wilkerson has jumped to sixth in points and is performing just as well as anyone in Funny Car at the moment.

“Every race is a new race,” Wilkerson said. “If we get down to Pomona and we have a chance to win it then we will clap our hands. I am going to my home race next weekend in St. Louis and I’ll have a bazillion people who come there including Dick Levi, and we’re going to have our dragster there, too, so that will be fun. I really do look forward to that event. It’s going to be a great time. I’m excited about going to St. Louis and that track usually treats me pretty well.”

Doug Kalitta (Top Fuel), Tommy Johnson Jr. (Funny Car) and Erica Enders (Pro Stock) were winners of the 2020 event. This year’s race will be televised on FOX Sports 1 (FS1), including live final eliminations coverage starting at 2:00 p.m. (ET) on Sunday, Sept. 26. It is the third race of seven races in Funny Car and Top Fuel in the Countdown to the Championship, and the final race in a string of four straight race weekends. Wilkerson has made the most of this stretch and he’ll try to keep rolling in St. Louis.

Along with racing in Funny Car, he’s debuting his Top Fuel dragster this weekend that Keith Murt will drive and Wilkerson’s son, Daniel, will tune. It will keep Wilkerson busy, but that seems to bring out the best in the 22-time event winner. He’ll have his hands full going against the likes of points leader Ron Capps, defending world champion Matt Hagan, who is just five points out of first, John Force, J.R. Todd and Cruz Pedregon. But Wilkerson, who has won at St. Louis, took out Bob Tasca III, Force, Capps and Pedregon in Charlotte, proving he’s capable of taking out the big guns in the class in the playoffs.

“Everybody who was in front of me, I beat,” Wilkerson said. “I was happy as heck. We’re doing our best. It’s very exciting to run a one-car team and have all this fun. I would be selling tires and batteries at home if I wasn’t doing this. It’s pretty exciting. I think we’ve got something for anybody we race, but we’re just trying to take it one race at a time.”

In Top Fuel, Antron Brown is hoping previous success at World Wide Technology Raceway can help jumpstart his Countdown to the Championship. The three-time world champion has lost in the first round in both playoff races, putting him in a difficult position with five races remaining in the season. He’s currently 138 points behind points leader Brittany Force, which means he needs a win in St. Louis and some fortunate breaks this weekend and at upcoming events to get back in the title mix.

It puts a sense of immediacy on this weekend and Brown simply wants his team’s hard work start to translate into success in his 10,000-horsepower Matco Tools/Toyota dragster. The team has lost its winning ways since taking the victory in early May in Atlanta, and Brown will also have to contend with the likes of Force, three-time defending champ Steve Torrence, Justin Ashley, rookie Josh Hart, Clay Millican, Leah Pruett and Mike Salinas in St. Louis. But the 68-time race winner also knows his team is more than capable at getting things moving in the right direction at a moment’s notice.

“We’re going to regroup and keep fighting,” said Brown, who has five career wins at World Wide Technology Raceway, including a stretch of four straight from 2012-2015. “We won’t let this get us down and we’ll get ready for St. Louis, a track we’ve done well at in the past. We need to focus on St. Louis and come out swinging. We need to keep focused and positive and not get down. We will use this as fuel to drive us to be better.”

Greg Anderson remains in the points lead as he seeks his fifth Pro Stock world title. Should he win in St. Louis, he would also become the all-time wins leader in Pro Stock history. Trying to stop him is a host of standouts, including defending world champ Erica Enders, Kyle Koretsky, who knocked off Anderson in the final round last weekend in Charlotte for his first career win, rookie Dallas Glenn and Aaron Stanfield.

The event also includes the NHRA Lucas Oil Drag Racing Series, where the future stars of the sport earn their racing stripes, as well as the popular Constant Aviation NHRA Factory Stock Showdown category. The Mountain Motor Pro Stock class will also be in action in St. Louis. After nitro qualifying on Friday, fans can enjoy the entertaining “Walking Tall” P.T. Cruiser Wheelstander drive by “NitroMike.” Fans can also watch Outlaw Pro Mod racing and also more throughout the course of the thrilling weekend.

As always, fans are granted an exclusive pit pass to the most powerful and sensory-filled motorsports attraction on the planet. This unique opportunity gives fans a chance to see teams in action and service their hot rods between rounds.
NHRA Camping World Drag Racing Series qualifying will feature one round at 5:30 p.m. CT on Friday, Sept. 24 and the final two rounds of qualifying on Saturday, Sept. 25 at 1:15 and 3:45 p.m. Final eliminations are scheduled for 10:30 a.m. CT on Sunday, Sept. 26.

To purchase general admission or reserved seats, call 618-215-8888. Tickets also are available online at wwwtraceway.com. For more information about the NHRA visit www.NHRA.com.