Hagan and Capps Dominate Funny Car Qualifying at
NHRA Midwest Nationals
The defending champ and current point leader are
qualified No. 1 and 2 heading into race day 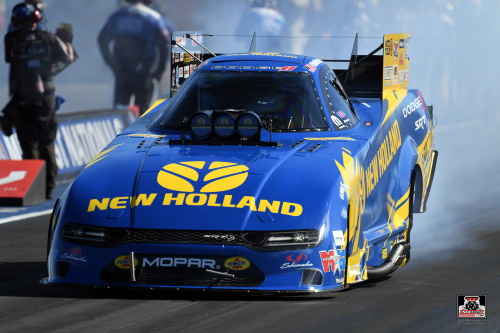 MADISON, Ill. (September 26, 2021) – Three-time and defending Funny Car world champion Matt Hagan will begin his campaign for a first NHRA Midwest Nationals trophy from the pole position on Sunday morning at World Wide Technology Raceway in suburban St. Louis. It is Hagan’s third No. 1 qualifier award of the season, and 43rd overall.

Hagan earned the No. 1 spot by driving the New Holland Dodge Charger SRT Hellcat Redeye to a stout 3.868 E.T. at 333.25 mph during the third qualifying session to move from the No. 2 qualifying position up to the top of the ladder, surpassing teammate Ron Capps who had previously held the provisional pole through the first two sessions.

Saturday’s final qualifying session was reminiscent of Funny Car Q1 with Hagan and Capps closing out the round by lining up in the final pairing. Just like on Friday night, Hagan and Capps unloaded with monster runs, rocketing to the two best passes of the session, and putting on a spectacular show for the fans by clocking side-by-side 333-mph runs with Capps posting a 3.876 E.T.

“I’m humbled and blessed to be here driving this amazing New Holland Dodge. Capps and those boys across the way with ‘Guido’ (Dean Antonelli) and John Medlen are throwing down, and so are our guys with Dickie Venables. He and Mike Knudsen and Alex Conaway and this entire New Holland/Mopar team just have this car on a string,” said Hagan, speaking of his team’s stellar performance which includes two wins in the last four races, with Hagan racing to victory in Brainerd, Minn. and stand-in driver Tommy Johnson Jr. winning in Reading, Penn. when Hagan was sidelined due to COVID-19.

“Our confidence as a team is so high,” added Hagan. “It makes me feel confident seeing what Dickie is doing and that builds my confidence as a driver. We have a car that can win this championship, without a doubt in my mind. I’ve been fortunate to win three of them and I know what it’s like to be there and when things start clicking and coming together and this team is doing that. It’s pretty darn exciting to be a part of.”

Hagan entered the race weekend ranked second in the Countdown to the Championship standings and trailing No. 1 ranked Capps by a scant five points. After posting the quickest pass of both Saturday sessions, and the second-quickest pass on Friday night, Hagan collected eight out of nine available bonus points, helping to narrow the margin between him and his teammate, who amassed five bonus points during qualifying. While Capps holds a one-point lead on Hagan heading into round one of eliminations on Sunday, Hagan knows he is virtually guaranteed to be awarded the 20 round-win points during E1 since his pole position set him up with a first-round Bye. Regardless, he knows that if he wants to continue to be a top title contender, he will have to be able to continue to go toe-to-toe with Capps who is seeking his second series title.

“Don Schumacher has put together a great team with Dickie and my group, and Ron and Guido over there. It’s absolutely throw-down each time we run each other, whether in qualifying or on race day. That NAPA team is going to be tough to go through to win a championship. Teammates are even tougher because we’re working with the same resources and data and parts and pieces. You don’t want for anything at DSR. To see (the NAPA team) run as good as they are, we know we have to face them at some point. I’ve seen Dickie coming into qualifying and race day, and we’ve been low E.T. of most rounds, and that gives me a lot of confidence in what the car can do and what we can do on the race track. I know Dickie can throw down when he needs to and hopefully I can do my job as a driver and give us a few hundredths (of-a-second) at the tree.” 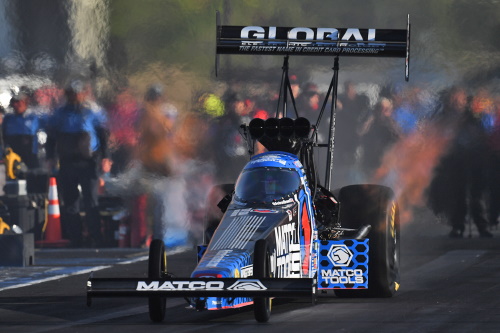 The Competition: No. 6 Spencer Massey

Quotable:
“We’re looking forward to a good race day tomorrow. I have all the confidence in this Matco Tools team here at DSR with Toyota and all of our great partners. We have to keep our heads down here at World Wide Technology Raceway. This is maybe the toughest Top Fuel field we’ve seen all year. All the match-ups are monster match-ups. We’d like to get some redemption from last weekend racing Spencer Massey again. It’s like the old days of a Matco/FRAM slugfest from like a decade ago. It’s fun and we’ll give it all we got.” 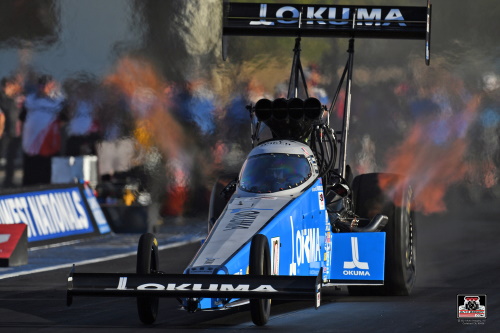 The Competition: No. 13 Clay Millican

Quotable:
“This is when the Countdown gets spicy. Coming into this race fifth in points and Clay Millican is always a massive contender. That’s a high-horsepower car that can get you anytime, but one thing I know for sure is that we are ready for race day. Our 3.71 was extremely strong. We worked on that from our Q2 run on Saturday afternoon. We did end up swapping cars after our first qualifier because it was just not acting right and we erred on the side of safety and that’s one of the things I love best about DSR and this team. We had our backup car ready to rip, and hats off to the team for getting the car out of the trailer, onto the track and into the No. 4 position. I’m very much looking forward to race day and this Okuma hot rod is still powered by Dodge//SRT with parts made in Okuma machines and I’m proud of this team and ready for race day.” 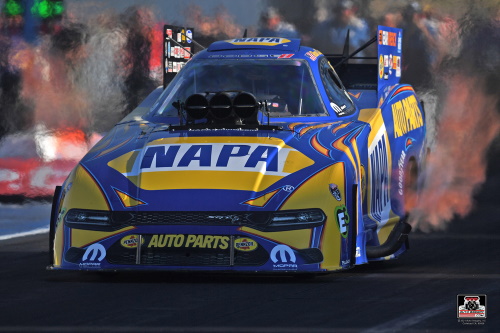 The Competition: No. 15 Chris King

Quotable:
“We’re so entrenched in this Countdown, and with so many great cars that can win at any time, you can’t take a minute to enjoy any of the accolades like points leads or past success here at St. Louis. I hope it’s another late Sunday and we’re in the winner’s circle again and we can look at how many points we gained in qualifying and on race day when we tally them all up. And we need to continue doing that to stay ahead of the competition. Our other DSR Dodge over there, with Matt Hagan, that’s just props to our DSR chassis shop, the fabricators, all the machine shop people back at DSR in Brownsburg (Ind.) and on the DSM side. To have two cars to go out and run No. 1 and 2 on Friday night, and do it again almost a day later and stay one-and-two is great for DSR and a testament to what Don Schumacher has built.” 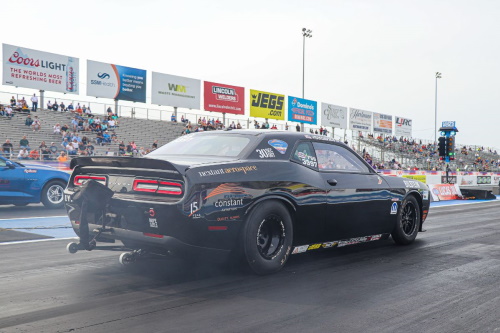 The Competition: No. 10 Joseph Welch

Quotable:
“It’s been all kinds of fun this weekend here at St. Louis and if it’s not fun, then why do it? Every time we take these Dodge Drag Paks out, whether it’s for testing or to an NHRA race, the team gets better, the cars get better and we’re moving in the right direction. A 7.82 and we qualified two-five-seven for the Constant Aviation Factory Stock Showdown Series’ St. Louis event, and we should have good weather tomorrow. We’re ready to take these DSR Dodges into the finals on Sunday.” 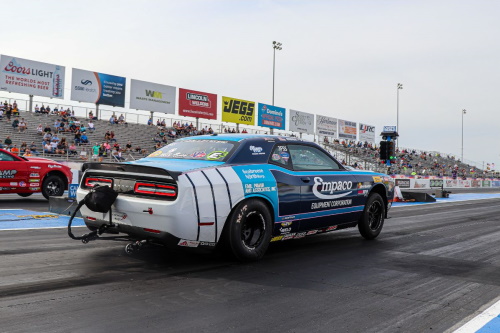 The Competition: No. 15 Lee Hartman 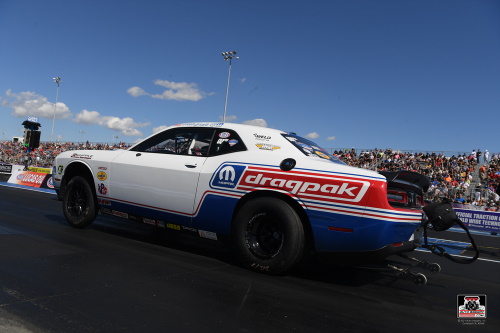 The Competition: No. 12 John Cerbone

Quotable:
“We have a Factory Stock Showdown Dodge Drag Pak bracket car. This new 2021 Dodge Drag Pak has been very impressive this weekend at St. Louis. All three of our cars have slightly different setups, tune-ups and gears, and for us, between A.J. Berge and Kevin Helms, to work together and put together some really great runs, it’s really incredible. It’s going to be a very strong Sunday. We have two runner-ups this year and a Factory Stock win is clearly on the horizon.”