KENT, Wash. (August 6, 2015) – Red-hot NHRA Top Alcohol Dragster pilot Chris Demke is back on the west coast after a dominant Midwest tour, which ended with a total of three race wins in four attempts. Demke, who leads the NHRA Lucas Oil Series national points, is set to compete in the NHRA Northwest Nationals near Seattle, with full knowledge that he’ll face competitors and conditions he hasn’t seen in months.

“No doubt the last few races have given us great momentum but you can never take it for granted. As we head back west we’re going to be facing a whole different set of players, each presenting their own challenges. We’re leaving the heat and humidity of the Midwest and heading back to the oxygen-rich Northwest. We traditionally run well at Seattle. I have high expectations for our car’s performance, and we’re going to need it because we’re going to run head-to-head with our strongest competitor, Joey Severance,” noted the Peen Rite-sponsored driver. 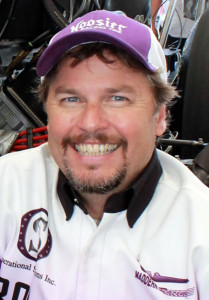 “We have that momentum,” Demke added. “Now it’s going to be important for our team to continue what we’re doing. The points and the championship chase are important, but we never want to lose sight of the fact that we go to the races to have fun.”

The Northwest Nationals is one of the most memorable and successful stops on the tour for Demke and the Peen Rite/Boost Performance Products blown alcohol dragster team. They went to the final round in half of their last six Seattle appearances, including an infamous coast-fest with a former rival in 2012. Demke’s Seattle memories aren’t all positive, though, as the Top Alcohol Dragster community lost one of its most universally respected competitors in 2010.

“The coast-fest final round with Jim Whiteley was a very exciting way to win a race, but losing Mark Niver in 2010 will always hold a higher position in my memory. That was my second win, and it taught me that winning isn’t always fun. I always go to Seattle with Mark Niver in my mind and in my heart.”

Chris Demke and the Peen Rite/Boost Performance Products Top Alcohol Dragster team will hit the Pacific Raceways quarter-mile for qualifying at the NHRA Northwest Nationals, August 7-9, beginning with sessions at 2 and 5 PM on Friday. Teams will get a third qualifying session at noon on Saturday before first round of eliminations at 3 PM. Eliminations continue on Sunday afternoon.