ENNIS, TX (October 11, 2021) – Coming into the Stampede of Speed at the historic Texas Motorplex two-time 2021 Funny Car national event winner Tim Wilkerson knew the event would be a great opportunity to throw down some quick times in his Levi, Ray & Shoup Summit Racing Ford Mustang. The Texas NHRA Fall Nationals featured four rounds of qualifying for the professional teams and Wilkerson took advantage of every round to fine tune his 11,000 horsepower Funny Car. As the only competitor on the tour who is a team owner, crew chief and driver the Springfield, Illinois based driver had his hands full over the four-day event.

“We had a really good handle on this Levi, Ray & Shop Summit Mustang this weekend,” said Wilkerson who has 22 Funny Car national event wins. “We ran pretty good on Friday night and I was happy with our last run. The conditions were pretty good this morning so we knew we could really get after it. That was a great run and we just got beat by a quicker run. That is how it goes sometimes.”

During the Friday Night Live! Session Wilkerson jumped into the top half of the 16-car field with a 3.936 second run at 327.27 mph and he stepped up in the final qualifying session yesterday with a stout 3.935 second pass at 322.51 mph. The reigning U.S. Nationals winner went into race day as the number nine qualifier and drew a tough match-up with 2018 Funny Car champion and number eight qualifier J.R. Todd. This was a rematch of last weekend’s first round which did not go Wilkerson’s way in St. Louis. 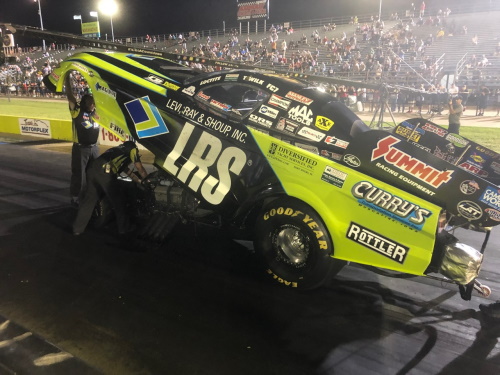 Wilkerson’s Mustang was up to the task against Todd, a fellow Countdown contender racing with Kalitta Motorsports. The veteran driver got the jump off the starting line with a reaction time advantage of .073 seconds to Todd’s .087 seconds. Both race cars were side by side the entire length of the track. At the finish line strip Wilkerson’s Levi, Ray & Shoup Mustang was running 330.31 mph and tripping the timing beams 3.886 seconds after it left the starting line. It was a dramatic improvement from his qualifying run and was one of the quickest runs of the opening session.

Unfortunately, Todd was making the quickest pass of the entire event in the lane beside Wilkerson. Todd’s winning time of 3.867 seconds at 331.36 mph advanced him to the next round and prematurely ended Wilkerson’s quest for a second Fall Nationals victory. For the second week in a row Todd ended Wilkerson’s race day, today by a mere .005 seconds.

The Levi. Ray & Shoup Summit Racing Ford Mustang will be back on the track at Bristol Dragway in just a few short days. With three more Countdown races in the playoffs the Thunder Valley Nationals will be a critical race for Wilkerson who sits in eighth place in the Camping World Funny Car point standings.