Plainview, NY (October 13, 2021) – Competing in his first NHRA Countdown second-year driver Justin Ashley is not shying away from the biggest stage in drag racing. Through four playoff races the 2020 Rookie of the Year has a runner-up finish, a semifinal and most recently a win at the historic Texas Motorplex during their epic Stampede of Speed Texas NHRA Fall Nationals. The win moved him to third in the points and on the way to victory he defeated Billy Torrence, Brittany Force and Steve Torrence, all competitors in front of him in the points at the time and all representatives of multi-car operations. Ashley, racing for Davis Motorsports, driving the Smart Sanitizer Top Fuel dragster powered by Vita C Shot, is one of the few independent teams battling for the NHRA Camping World NHRA Championship.

“In my opinion, as a relatively newly formed and independent team, this Davis Motorsports team is doing something extraordinary,” said Ashley. “When you have a crew chief like Mike Green in your corner and the leadership of Dustin Davis we have experience, passion and a desire to be successful on and off the racetrack. This Smart Sanitizer crew has been terrific and as a result put us in a position to compete for a world championship.”) 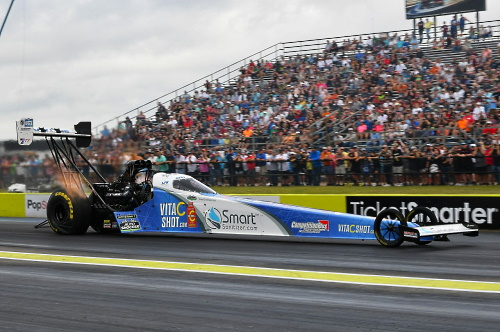 This season Ashley has been in the championship mix of Top Fuel teams since they raced to the semifinals at the season opening Gatornationals. They have been a consistently strong qualifier and Ashley’s skill on the starting line has won a number of rounds for the team. They raced to the finals at the Winternationals in late July and then the team really started to hit their stride at the perfect time when the Countdown began. Entering the playoffs in seventh place they raced to a runner-up finish in Reading, Pennsylvania, then the semifinals in Charlotte, they stumbled in St. Louis with an early exit but bounced back in Dallas with a win in dominant fashion.

“We have always had an elite team and now the results are there to provide tangible proof,” said Ashley, who picked up his first win at the 2020 Summernationals. “This is a complete team effort. You look at how we won in Dallas on Sunday. Mike Green gave me an amazing Top Fuel dragster that ran like a bracket car and the team did an amazing job servicing so everything would operate flawlessly. That was an excellent team performance all the way around, and we are going to try and improve on that for the rest of the season starting at Bristol Dragway.”

For the young team heading to the famed Thunder Valley Dragway will be a new experience but one they feel confident they can handle. Veteran crew chief Green has experience tuning drivers to victory at the Thunder Valley Nationals and the Smart Sanitizer Vita C Shot crew is experienced enough now to handle just about any challenge thrown their way.

“We are definitely still a young team, but our guys get great direction and support from Mike and Dustin,” said Ashley. “I love driving this race car with these guys. We are third in the points with only a few races remaining. We must take care of business in Bristol first. This is a great facility, and the key will be getting a good run Friday night. It sounds basic but if you can get that good first run it will set you up for success on Saturday and Sunday.”

In addition to his driving duties Ashley is constantly working to add sponsors and marketing partners to the Top Fuel operation. With season-long support from companies like KATO Fastening Systems and Auto Shocker along with a host of associate sponsors Ashley has been an incredible marketing machine. Vita C Shot came on board two races ago and is committed to the team throughout the 2022 season and Ashley continues to talk with potential businesses about the advantages of joining his operation.

“We have one of the most accessible and exciting sports on the planet,” said Ashley. “Our focus is working with our marketing partners and helping to put them in a position to grow their business, entertain their customers or employees and have a lot of fun while they are doing it. Everyone who comes to an NHRA national event wants to come back as soon as they can. We are entertaining fans and corporate guests across the country. I am always excited to talk with new companies about the benefits of being on our team.”

Qualifying for the Thunder Valley Nationals will begin at 5:30 p.m. ET on Friday, October 15 and there will be two more qualifying sessions on Saturday, October 16. Final eliminations will begin on Sunday at 11:30 a.m. ET.