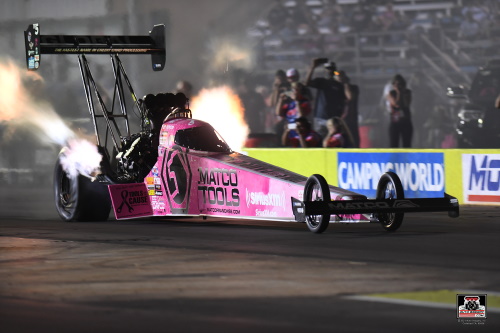 Quotable:
“Bristol has long been one of our favorite race tracks. We love going to Thunder Valley, and we want to do well there. We’ve won everywhere except Bristol, so we want to notch that win there badly. It’s the last piece that we need to complete the puzzle of winning at every event on our current schedule. It’s always been a special place for us and we’ve been close numerous times. It will be huge to be able to bring that win home and put that whole picture together for all the years I’ve been at Don Schumacher Racing. We can’t wait to get out there. We’ll go in with our heads down and we’re hungry and ready to do battle.” 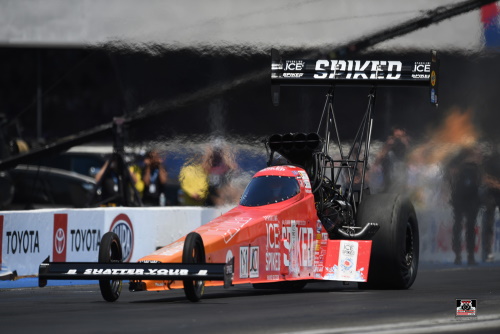 Quotable:
“Just the thought of running the Sparkling Ice Spiked car this weekend in Bristol brings a euphoric feeling of happiness, just like their drinks do. Bristol is definitely our opportunity to get back on top of our game. We’ve had a strong car there before, we’ve made it to the final round. Having the backing of Sparkling Ice and their large support system, and the energy they bring will be great. We have every intention of spiking our competition every single round, beginning with qualifying. I’m looking forward to the cool, crisp October weather that awaits us in Bristol for that power that’s been eluding us. We’ll be coming to bring our clip back empty.” 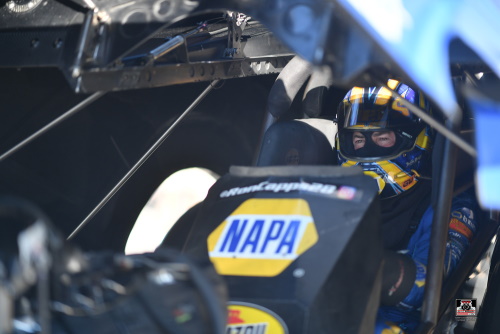 Quotable:
“There have been a lot of changes to the NHRA schedule over the last year-and-a-half, and the really nice thing about getting back to somewhat of a normal schedule this year was having certain races fall in different times of the year than we’re used to. We had the Winternationals in July, and we won it with friends and family there which was unbelievable, so having Bristol in October and during the Countdown, is a very welcome sight. I’ve been very lucky to win there several times in the past and have had great success there, and now for it to be a Countdown event in a time when I really feel like our NAPA team has hit its stride is great.

“Obviously, we’re on a very good high coming off that win from the FallNationals. Looking at weather conditions, we’re going to see a Bristol Dragway track that’s probably going to have track records fall that have been there for years. We haven’t seen conditions like what we expect to see this weekend, and when you get those cooler temperatures in Thunder Valley, you better hang on tight because it’s going to be a lot of fun. That’s why I love racing with ‘Guido’ (Dean Antonelli) and John Medlen and our NAPA AutoCare team. They excel in all conditions and that gives me great confidence as a driver. I can’t wait to see our Bristol fans this weekend. We missed them last year and I know they’re ready for us to be back in town.”

Quotable:
“Bristol is always a big weekend because it’s a home track for me, and we plan to put on a good show for all of our supporters and hometown fans. We have a great running race car and we’re still leading in the points after a runner-up finish last weekend in Dallas. (Ron) Capps is nipping at our heels, and we need to put some distance between him and everyone else. With three races to go, anything can happen and we’re hoping to widen that gap this weekend. No better place to do that than at my home track and hopefully we will finish the weekend in the winner’s circle. I’m glad that our car has been on such a tear at the right time – winning in Reading and St. Louis, and a runner-up last weekend in Dallas, and I expect that momentum to carry into Bristol. My focus right now is winning this championship for Don Schumacher Racing and hopefully holding up our fourth series championship trophy at the end of the season. Would be great to go back-to-back, but we’ve got to take it one race at a time and focus on the task at hand and that’s turning every win light on every round.”