POMONA, CA (November 11, 2021) – As the 2021 NHRA Camping World Drag Racing season comes to its conclusion this weekend at Auto Club Raceway in Pomona second year driver Justin Ashley is in position to have his best career finish. The 2020 Rookie of the Year could finish as high as second in the points with a strong effort. Throughout the Countdown Ashley and his Justin Ashley Racing Vita C Shot Top Fuel dragster has been racing at an extraordinarily high-level racing to a win, a runner-up finish and three additional semifinals over the last six races. The effort jumped the team from seventh to fourth going into the season finale.

“We have had a successful Countdown,” said Ashley, following the Las Vegas Nationals. “We are going to put our best foot forward in Pomona with the intent of finishing strong and moving up in the points standings. I have to thank Dustin Davis, Mike Green and this whole team for their effort throughout the countdown and entirety of the season.” 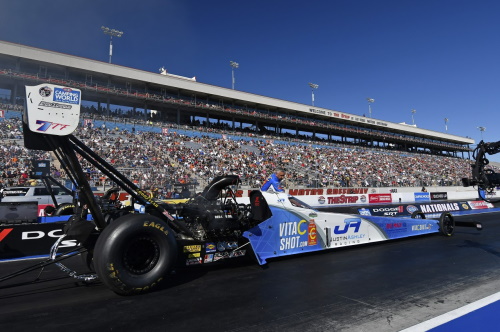 Justin Ashley, 2020 Rookie of the Year and No. 4 in Top Fuel points

Ashley’s sophomore season has been a tribute to hard work and team effort. The off-season addition of veteran crew chief Mike Green accelerated the progress of the young team. Throughout the season the overall performance improved at a steady pace with major improvements taking hold in the summer with a runner-up finish at the July Winternationals in Pomona followed by another final round to start the Countdown at the Reading Nationals.

“The Dallas win was huge for our team but the season as a whole has been great,” said Ashley. “This entire team has been working very well together and we are laying the foundation for long-term success. We have Mike Green coming back next season and a crew of extraordinary talented guys with one more year of experience. We want to finish the season on a high note with another successful race in Pomona.”

In July Ashley qualified No. 7 and raced to the final round against Leah Pruett at Auto Club Raceway. To get to the last round Ashley had to take out rookie Buddy Hull, then world champions Brittany Force and Antron Brown. Outrunning or outdriving world champions has become a regular occurrence for Ashley and his Mike Green led Top Fuel team. This season Ashley has outdueled several world champions on race day.

“We definitely feel like we belong with the top teams in the category,” said Ashley. “We have a lot to prove but this season has shown what this team is capable of, and I am very proud to be representing Vita C Shot, Auto Shocker, KATO Fastening Systems and so many of our business partners. We are continually looking for long-term sponsor relationships and one of the best things we can do is have success on the racetrack.”

In addition to Ashley’s success on the track the young driver has been a force off the track as well. Immediately after the Las Vegas Nationals Ashley’s Top Fuel dragster was on display in the NHRA booth at the international SEMA Show at Las Vegas Convention Center. Ashley and team owner Dustin Davis participated in the NHRA Breakfast event as part of a panel of emerging NHRA team owners. Ashley has enhanced his relationships with Auto Shocker, KATO Fastening Systems, Vita C Shot and many more corporate partners throughout the season and this off-season will be equally as busy.

“There are two seasons in the NHRA, the racing season and the offseason,” said Ashley. The racing season is busy, but so is the offseason. Following Pomona, we’ll continue working with our existing partners and go right into adding new partners that want to grow their business in a great marketing environment. I love everything about the NHRA, and I know there are so many companies that can benefit from an association with our team. We have been meeting with people since the Countdown began and we will start finalizing some of those deals in November and December.”

The Auto Club Finals will feature points and half and additional points in qualifying making the opportunity to advance up the standings very doable. Qualifying will begin on Friday afternoon with two additional qualifying sessions on Saturday. Final eliminations will begin at 10 a.m. PST on Sunday.